American Airlines Fire: 'This Could Have Been Absolutely Devastating'

O'HARE AIRPORT — A harrowing scene played out at O'Hare Airport on Friday afternoon after an American Airlines flight caught fire on a runway, forcing 170 people to flee the plane on inflated slides as huge flames and thick black smoke poured from the aircraft.

"The smoke was the worst thing," said one passenger, Gary Schiavone, from DeMotte, Ind. "That was the scary thing."

All 161 passengers and nine crew survived the fire aboard American flight 383 bound for Miami around 2:35 p.m.

Just moments before the plane was to leave the ground, a loud explosion was heard, and a fireball from the rear right side could be seen outside the windows, passengers said.

American Airlines said the pilot aborted takeoff "due to an engine-related mechanical issue."

Listen to Alex Nitkin describe the controlled chaos as the plane burned.

The FAA said "the pilots reported that the aircraft blew a tire."

Schiavone said the plane was barreling down the runway when he heard a loud "clunk" and then an explosion on the right wing, which he assumed was the engine exploding. Then he saw a "big ball of red flames" outside the plane. The heat from the fire cracked at least one plane window, he said.

The plane caught fire just as a training exercise ended, according to Jose Guillen, who works at O'Hare.

Dozens of pieces of rescue equipment was rushed to the burning plane as passengers slid down the escape chutes and ran from the plane. Within minutes, photos and short videos taken by passengers and witnesses ricocheted around the internet on social media.

Another passenger, Hector Cardenas, said the plane was "seconds away from taking off ... within 10 or 15 seconds we would have been in the air."

The escape was described as panicked by some passengers.

"Everybody was standing up running like it was the end of their lives," Cardenas told ABC7.

Another passenger, Sarah Ahmed, who said she was one of the last off the plane, described how smoke came into the passenger compartment, and flames were against the windows. Evacuating passengers panicked at that point.

"Everyone's screaming and jumping over each other," she said.

Schiavone said the escape was delayed by some passengers grabbing their luggage from the overhead bins.

“Thirty seconds into the safety video they say, 'In the event of an emergency, don’t grab your luggage.' Well, right when it happened, seven or eight people tried to grab their luggage. You’re not supposed to do that,” he said.

Ahmed said her co-worker "took a tumble" while sliding down the escape chutes. Others banged into each other on the slides.

Fire Department officials said 20 passengers were brought to nearby hospitals, all with non-life-threatening injuries. Most were bruised or hurt their ankles while exiting the plane.

Fire assistant deputy commissioner Timothy Sampey said the fact that the plane had not taken off when the explosion occurred helped reduce injuries.

"This could have been absolutely devastating if it had happened later" in the takeoff, Sampey said. The plane was about halfway down the runway when the explosion occurred, giving the pilots ample room to stop.

Others filmed when they were in the grass along the runway.

The runway where the fire occurred was closed, but another was opened, allowing the normal flow of air travel to continue without major delays, officials said.

Passengers inside the O'Hare terminal craned to see what was happening on the airfield. So did passengers arriving on the runways not shut down by the accident.

Pam Young, from Chicago, was on a separate plane arriving from Phoenix around 3:30 p.m.

"Once we landed and everyone's phones came on and we started learning about what had happened ... then the flight attendant pressed her face to the window and said 'Oh, my gosh.' The whole back of the plane was black. I hope everyone's OK."

Massive airplane fire at #ohare. Happening right now. Prayers for everyone on board. pic.twitter.com/BPAeRXbWCD

EMERGENCY AIRCRAFT DOWN AT OHARE 2 11 RESPONSE details to follow 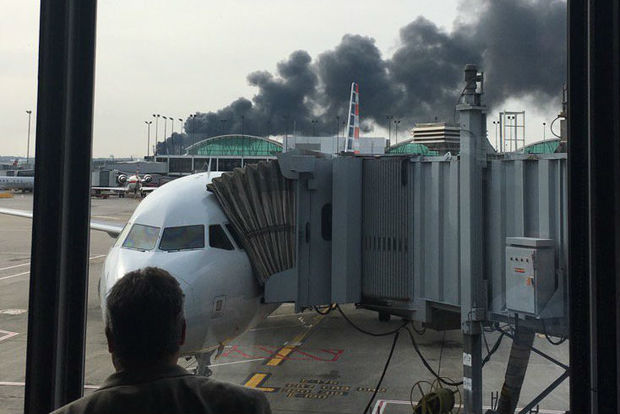