MOUNT GREENWOOD — It came as no surprise that several headstones were found as construction began on the new Extra Space Storage facility in Mount Greenwood.

The building on the northeast corner of 111th Street and Harding Avenue replaces St. Casmir Memorials, a long defunct vendor of such things. None of the headstones were engraved, said Gary Delaney, president of Banner Storage Group LLC.

"I had expected that," Delaney said Monday. "I figured when we knocked down that shed, we'd find some of them in there."

Construction on the 70,000-square-foot building began about a month ago. Workers are now laying the foundation for the three-story building that will contain about 600 storage units, Delaney said.

The $9 million facility was originally designed to be two stories with a full basement, but issues with the basement have since prompted the building to be three stories, said Delaney, adding that the facility will remain at the agreed-upon height of 35 feet.

He expects the business to open in August. All loading and unloading will be done inside the building with the entrance along 111th Street. The building will include a small store for customers, selling packing supplies, locks and other related items. 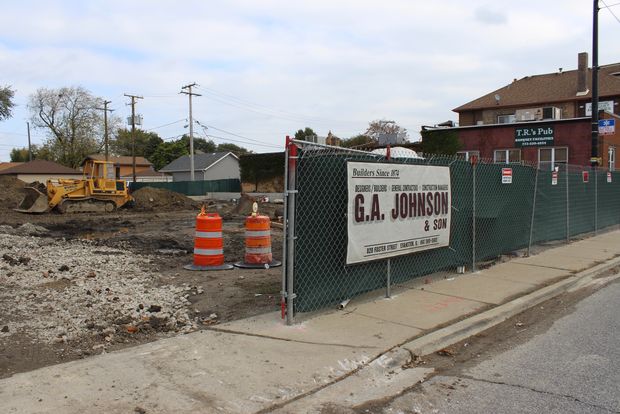 St. Casmir Memorials previously operated on the northeast corner of 111th Street and Harding Avenue in Mount Greenwood. The business sold headstones and other items for cemeteries. [DNAinfo/Howard A. Ludwig]

Delaney first presented his idea for a Mount Greenwood self-storage facility on Sept. 15, 2015. The roughly 40 attendees at the community meeting at the Chicago High School for Agricultural Sciences were lukewarm to the idea.

"Self-storage facilities are about the lowest traffic generators than any other commercial site," Delaney said in an effort to win over the crowd made up mostly of nearby residents.

Ald. Matt O'Shea (19th) opened the meeting by saying he'd prefer another business at the location, like a restaurant or a sought-after retailer. But O'Shea said the only other developers that have ever shown interest in the property have all wanted to build apartments or condominiums — an idea the Southwest Side alderman was strongly against.

So Delaney argued for his Northbrook-based business, saying most of his customers are women who have recently been through a major life event, such as a student returning home from college, a death in the family or a divorce.

On average, customers rent a storage unit for 1 year and 3 months and visit the facility every four months while renting. Each visit lasts about 20 minutes, and the typical unit is 70 square feet, Delaney said.

One of the biggest concerns among residents was the additional parking required for the new facility. But Delaney said he's never seen more than 20 people visit one of his storage facilities in a single day. About 15 customers visit on an average day. 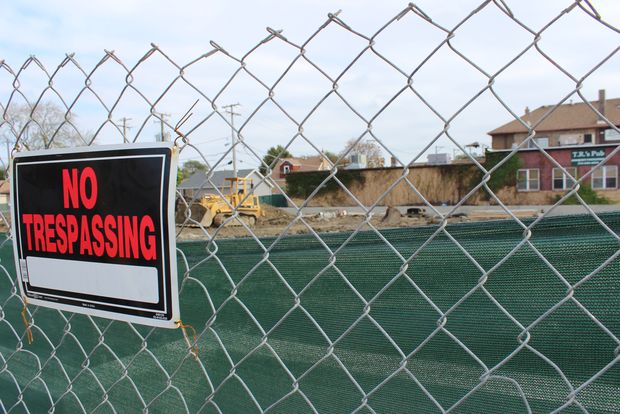 The foundation for Extra Space Storage is being laid on the northeast corner of 111th Street and Harding Avenue in Mount Greenwood. The facility will replace St. Casmir Memorials. [DNAinfo/Howard A. Ludwig]

Initially, Delaney proposed a small storefront — perhaps operated as a coffee shop — that might be incorporated into the first floor of the storage facility. But residents quickly dismissed the idea over parking concerns. Delaney was receptive, and the building is slated to entirely be used for storage as a result.

Extra Space Storage will be open from 9 a.m.-7 p.m. Mondays-Saturdays. The business would be closed on Sundays and would have two employees at the start. As the business becomes established, the operators would likely transition down to one employee.

Delaney said his demographic studies make him confident that his business will succeed. He said 22,000 people live within one mile of the proposed facility and about 85 percent of his customers will come from within two miles of the building.

He also said the business would be a boon to the tax base. The vacant property generated about $18,000 in property taxes as it stands. That will jump to $300,000 when the storage facility is finished.

No tax incentives will be used for the deal, and the builders are relying on union labor, Delaney said.

He said not all neighbors are keen to his climate-controlled self-storage storage facility. But he's knocked on most of the doors nearby and explained his plan. Those closest to the new building seem fine with the new neighbor.

"I think everyone is happy with the esthetics — the way the building is going to look when we are finished," Delaney said.