Hundreds Gather Outside Trump Tower To Protest His Treatment Of Women

Alicia Swiz of Hermosa organized the Chicago protest in response to the recent release of a videotape showing Trump's boast about grabbing women without consequence.

The protest, organized on Facebook, grew much larger than Swiz expected, drawing women from around the city as well as international media attention.

"It's so exciting to see these women and everyone's having fun," Swiz said Tuesday at the scene of the protest. "We're mad, but we're excited to be here and empowered supporting each other."

Swiz said about 200 women had gathered around the 98-story tower near 401 N. Wabash Ave. by 8 a.m. Tuesday, holding up signs that said "Chicago United, Never Trump" and "This vulva votes."

They also led chants including "love trumps hate," "my body, my power," and a political adaptation of Khia's 2002 hit "My Neck, My Back." 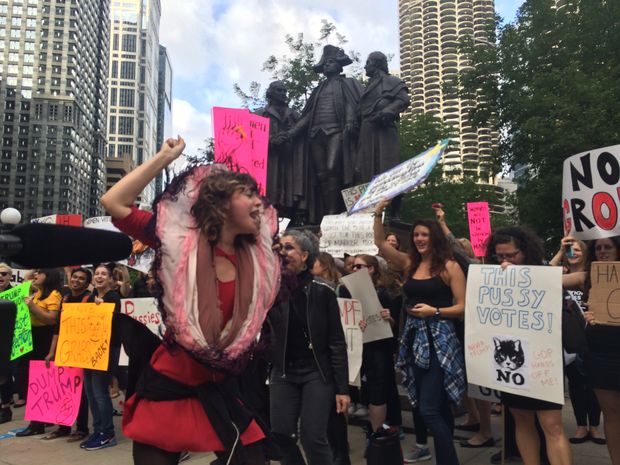 Eve Rydberg and other protesters chanting near Trump Tower on Tuesday. [DNAinfo/David Matthews]

The group was joined by a small, mostly male, group of Trump supporters shouting "read Wikileaks" and holding up signs that, among other things, claimed that Hillary Clinton is a lesbian.

One of those counter protesters was Suzzanne Monk of Andersonville, who wanted to decry the Clinton campaign's "anger and misinformation on the campaign trail."

"We are here to counteract some of those lies," Monk said. "We want to elect somebody who has created jobs and knows how to do that in the future."

When asked about the Trump tape, Monk said her candidate's remarks were misinterpreted.

"The kinds of things that were said are the kind of things you hear guys say all the time," she said. "The media misconstrued that viciously as a statement of sexual assault when it wasn't." 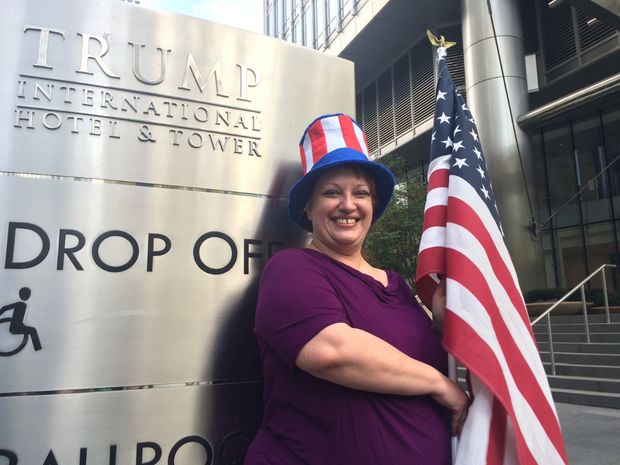 The event, titled "P--sy Grabs Back" referred to the presidential candidate's private remarks that were recorded during a 2005 taping of "Access Hollywood." More than 500 women RSVP'd for the event on Facebook.

"It's just a show of solidarity; most of us are offended he's allowed to run," Swiz, a humanities professor at Harold Washington College, said last week. "He’s just proven time and time again he doesn’t respect women ... not only in how he treats them, but how he speaks to them."

Last week the Washington Post revealed the 2005 tape, in which Trump crudely told former "Access Hollywood" host Billy Bush he uses his position of power to kiss and grab women without consent or consequence.

Trump later downplayed the comments as "locker room talk," but the spin doesn't resonate with Swiz or many other women. A group of women in New York blockaded Trump's namesake tower in Manhattan on Wednesday.

"We will not allow a man who treats women this way to have a voice louder than ours; in order to do that, we have to stand together," Swiz said. "I felt [Trump's comments] viscerally in my body. As a woman who has been grabbed — unwanted — by a man ... to have someone talk so casually and cruelly [about that], it makes my skin crawl."

Another protester, Eve Rydberg of Logan Square, found out about the protest Monday. She wore a handmade vagina costume.

"It's a fun way to grab attention for the real important cause of Trump being a bummer," Rydberg said. "It was really beautiful to see these women come together ... as much attention as we can bring to voting and making sure you can vote that's where it's at."

More photos from the event:

Omg the signs at this protest are the gold standard. pic.twitter.com/nSaAWYvwC5

#Trump protest this morning in front of the Trump Tower in downtown #Chicago. https://t.co/8bqKnMfaSR

Good start to the day. #pussygrabsback