DOWNTOWN — Donald Trump's honorary street sign was stolen before city officials had the chance to take it down, police confirmed Friday.

The sign, which was erected in 2006 while the 98-story high-rise was under construction, vanished some time between Monday afternoon and Tuesday afternoon, Officer Kevin Quaid, a police spokesman, said.

While the case remains unsolved, the police report clears up some of the mystery swirling around the sign's disappearance. It went missing less than a week after a group of 47 aldermen and Mayor Rahm Emanuel moved to take it down.

Emanuel, while addressing reporters Thursday, provided his own alibi.

"I was in synagogue," he smirked.

A spokesman for the city's department of transportation, which installs and removes street signs, somewhat condemned the theft.

"We do not condone the theft of city signs, even if the subject of the honorary sign is not honorable,"  the spokesman, Michael Claffey, said in a statement.

When asked if the city will erect a new sign to replace the stolen one, Claffey said:

Ald. Brendan Reilly (42nd), who said in August the sign was not even on his "top 100 list of priorities," led the push last week to take the sign down. Online records show the proposed ordinance is still pending in committee. The next City Council meeting is Nov. 1. 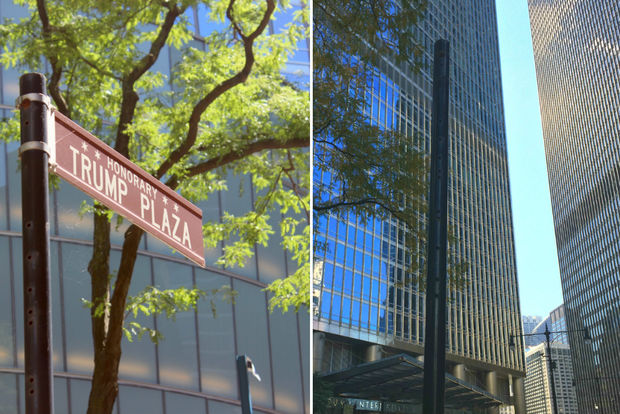 The aldermen cited the presidential candidate's "hateful and racist campaign against immigrants and minorities" in their push to remove the sign last week.

Trump likened Chicago to a "war-torn country" in last month's presidential debate, but his comments about immigrants and women also upset the aldermen, who cited the presidential candidate's "complete disregard for civil liberties" in their proposed ordinance.

"Donald Trump's mean-spirited remarks about Chicago during the first presidential debate misrepresents the city and discredits the positive attributes of the city," the legislation reads.

RELATED: Why Does Donald Trump Have A Chicago Street Named After Him?