On its website, the Fraternal Order of Police Chicago Lodge 7 listed its endorsements for the Nov. 8 election, backing both Republican and Democrat candidates for various local races. When it comes to the presidency however, they chose Trump while boldly highlighting that he was backed by the National Fraternal Order of Police, the world's largest police union.

Last month, the national FOP was criticized for backing Trump, but stood by the choice. Jim Pasco, executive director of the national union, explained why to the Washington Post:

“His representations to us, both in his public statements about police and in our meeting with him as a follow-up to the questionnaire, he made commitments to us that he would support law enforcement if he was elected, and keep our views in mind as he undertook to uphold the threshold responsibility of a president, which is to protect public safety.”

A call to Chicago's union President Dean Angelo on why Lodge 7 stuck with Trump was not immediately returned.

In August, Trump said Chicago's violence could end if police had the backing to do it.

"I know police in Chicago," he said during a Fox News interview. "If they had the authority, they could get it done. How? By being very much tougher than they are right now."

Trump said he spoke to an unidentified police official, who told him that with the backing of City Hall, violence could end "in one week."

A Chicago Police Department spokesman said at the time that "no one in senior command at CPD has ever met with a Donald Trump or a member of his campaign."

Trump's remarks came after Mayor Rahm Emanuel was quoted saying, "We have allowed our police department to get fetal, and it is having a direct consequence," adding that the police "have pulled back from the ability to interdict ...[because] they don't want to be a news story themselves."

In September, the GOP nominee proposed resuming "stop-and-frisk" policies in Chicago because "Chicago is out of control." The practice of stop-and-frisk involves police detain pedestrians and search them. Once popular in New York, it was deemed unconstitutional by a federal judge as it was applied there and has been blamed for escalating tension between police and minorities.

RELATED: Trump's Honorary Sign Taken Down Outside His Chicago Tower

As for the union endorsement, according to a post on the local union site, "On September 19th the Political Action Committee met for the purpose of interviewing and formulating recommendations for endorsement purposes in the upcoming elections of November 8th. Consideration was given only to those candidates who requested the FOP’s endorsement."

When Cleveland's police union voted to endorse Trump, it created a rift among officers. Black Shield, a group that supports black officers in the Ohio city, demanded the Cleveland Police Patrolmen’s Association rescind its endorsement of the controversial candidate. 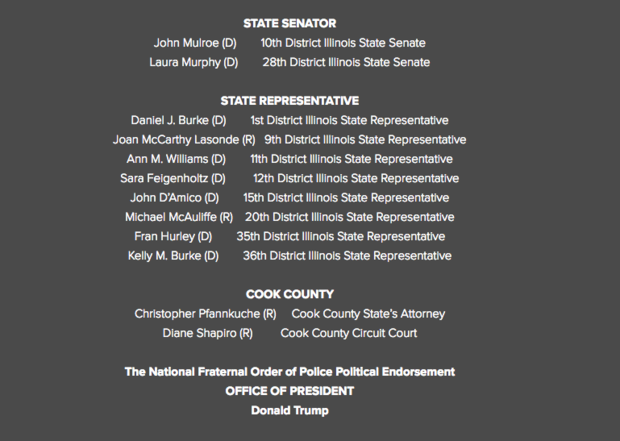