Meet The Axemen, The Motorcycle Club for Firefighters

MORGAN PARK — It seems only appropriate that the emblem for the Chicago Axemen be surrounded by flames. After all, the motorcycle club is almost entirely composed of area firemen.

The Axemen will host an Octoberfest fundraiser from noon to 6 p.m. Oct. 29 at O'Rourke's Office in Morgan Park. The event last year raised $7,000 for the Gold Badge Society of Chicago, which supports families of fallen firefighters.

It costs $10 to attend the second annual benefit at 11064 S. Western Ave., and this time the proceeds support the Ignite the Spirit Fund. About 150 people are expected, according to Larry Anoman, also known as Dog.

Anoman is president of the inaugural Illinois chapter of the Axemen. The upcoming fundraiser aims to help the families of firefighters in need. The chapter also hosts an annual birthday party to raise money for charity.

"People look at motorcycle clubs, and they look down. They think of the Hell's Angels," Anoman said. "We are all solid people — family-oriented with kids." 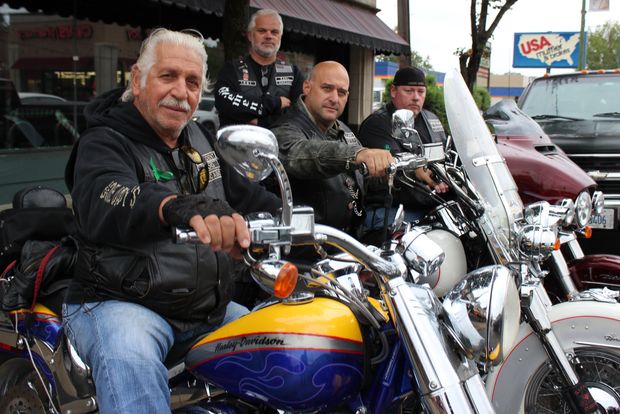 Members of Illinois Chapter 1 of the Axemen Motorcycle Club park outside of O'Rourke's Office in Morgan Park. The group will host a fundraiser for the Ignite the Spirit Fund from noon to 6 p.m. Oct. 29 at the bar at 11064 S. Western Ave. [DNAinfo/Howard A. Ludwig]

Anoman's chapter has about 20 members. All club members must own a motorcycle, and 80 percent of the club is required to be made up of active or retired union firefighters. Other members tend to be nonunion firefighters and other biker buddies.

The group gathers to ride for charity events almost every weekend. Often, they ride to support fundraisers held by surrounding Axemen chapters or charities that speak to the group's overall mission to help the less fortunate, first responders, veterans and others, Anoman said.

Among the frequent rides this summer was a trip to the Original Island Shrimp House in south suburban Palos Park. These monthly cruise nights raised money for the Ende, Menzer, Walsh & Quinn Retirees', Widows' and Children’s Assistance Fund, which provides financial support to widows and orphans of the Chicago Fire Department members.

Anoman's group was the first in the state to align with the Axemen in 2008. The Axemen's national club was founded March 1, 1998, in Detroit. There are now four Illinois chapters — 27 overall in 11 states, according to Anoman, a Morgan Park resident.

He said his group is mostly made up firemen living within the Beverly, Mount Greenwood and Morgan Park neighborhoods. The Chicago group signed on to become an affiliate shortly after the line-of-duty death of Lt. Scott Gillen.

Axemen from Detroit showed up in force for a 2001 fundraiser for the family of Gillen, who was killed after being struck by a car on the Bishop Ford Expy. The 14-year Fire Department veteran was married and had five daughters. 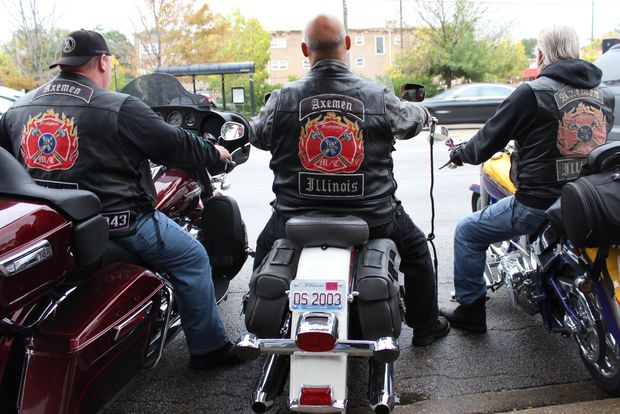 Members of the Illinois Chapter 1 of the Axemen Motorcycle Club park outside of O'Rourke's Office in Morgan Park. The group will host a fundraiser for the Ignite the Spirit Fund from noon to 6 p.m. Oct. 29 at the bar at 11064 S. Western Ave. [DNAinfo/Howard A. Ludwig]

For many members, the Axemen is an extension of the camaraderie that is commonplace in the firehouse, said Shawn Dyer, a suburban firefighter in Romeoville and Chapter 1 member who's also known as Dr. Feelgood.

Dyer emphasized that those interested in attending the fundraiser should not be intimidated by the members' nicknames, black leather vests or loud motorcycles. The Axemen are simply a fun-loving club of firemen who enjoy the occasional charity ride, he said.

"A cruiser is preferred, but not everyone has a Harley," Dyer said of the most common type of bike in the group.