By Justin Breen |&nbspOctober 6, 2016 8:03am | Updated on October 7, 2016 10:32am
@dnainfo_breen
Twitter Facebook Email More
An adult osprey and its chicks at the Chicago River.
View Full Caption
Flickr Creative Commons

DOWNTOWN — The Chicago River's rebirth has been good for fish — and the birds that eat them.

Friends of the Chicago River executive director Margaret Frisbie provided DNAinfo with a list of more than 60 birds that can be found floating on or standing near the Chicago River. The list includes several bird species that eat fish like bald eagles, osprey, egrets and herons.

"Clearly there are more birds that live here and pass through," Frisbie said. "Fish-eating birds indicate the health of the river — there are lots of fish and birds to eat them."

One of the fish-eating birds is the Black Crowned Night Heron, which is endangered in Illinois, but can almost always be found at the Chicago River at the River Park's small waterfall.

Frisbie said her group is trying to attract more ospreys by building nesting platforms for them in forest preserves around the city.

Fifty-eight fish species, including 28 game fish species and 45 native species, have been collected by officials during the 2000s. The dozens of species in the river now is a huge jump from the five to seven that were found in the 1970s.

Here's the list of birds that can be found in the Chicago River (fish-eating species are in bold): 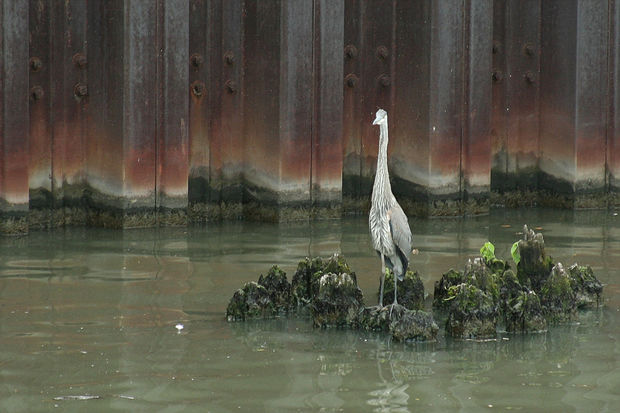 A Great Blue Heron fishing for a meal on the Chicago River. [Flickr Creative Commons]