By Howard Ludwig |&nbspOctober 3, 2016 2:35pm | Updated on October 3, 2016 2:41pm
@howardaludwig
Twitter Facebook Email More
A Beverly parent is trying to shed light on the safety of cellphone towers at Mount Greenwood and Sutherland elementary schools through an online petition being circulated in the 19th Ward.
View Full Caption
DNAinfo/Howard Ludwig

BEVERLY — A Beverly parent is raising questions about the safety of cellphone towers at Mount Greenwood and Sutherland elementary schools through an online petition being circulated in the 19th Ward.

The petition had 764 supporters as of Tuesday morning and includes a short video created by Terrence Fagan, father of 6-year-old Dylan.

Dylan Fagan attended kindergarten at Sutherland last year. But his parents decided to send him to Christ the King School at 9240 S. Hoyne Ave. in Beverly for first grade over concerns related to the radio-frequency radiation at the public school at 10015 S. Leavitt St.

"I think there's a very good reason to doubt the safety of this stuff," said Fagan said, referring to the antennas mounted on smokestacks at Sutherland and Mount Greenwood.

For its part, Chicago Public Schools referred to the standards for safe RF radiation established by the Federal Communications Commission. The American Cancer Society has also found little evidence of a threat, according to CPS spokesman Michael Passman. 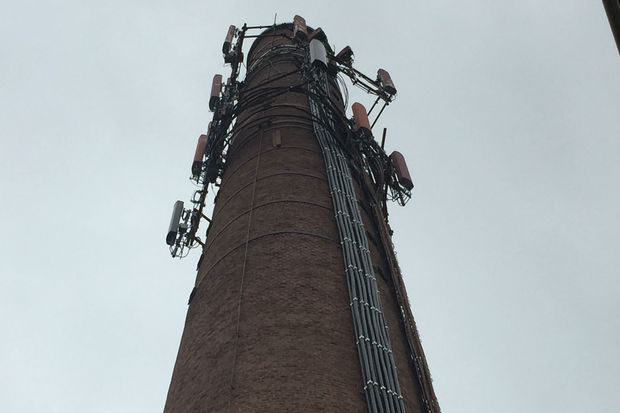 A Beverly parent is trying to shed light on the safety of cellphone towers at Mount Greenwood and Sutherland elementary schools through an online petition being circulated in the 19th Ward. [DNAinfo/Howard Ludwig]

In an emailed statement, Passman also said local school councils are allowed to decide if a cellphone tower should be built, and even then a third party firm conducts an analysis of the potential impact.

But none of that matters to Fagan, who said he was "concerned from the get go" upon seeing the cell phone towers at Sutherland. So, he bought a device used to measure RF radiation and filmed the results.

Fagan also provides evidence of the amount of RF radiation generated by a typical cellphone call, which gives off a modest reading of 0.3 volts per meter. Finally, he heads to the campus of Sutherland and Mount Greenwood School at 10841 S. Homan Ave. — both of which send his device into a frenzy of beeping and buzzing.

These campuses show readings of 6 volts per meter. The maximum limit per FCC guidelines is 27.5 volts per minute for a span of 30 minutes.

So what does it all mean? Even Fagan will tell you that he doesn't particularly know. Though he's clearly uncomfortable with his son or any other children playing outside of the school while being bathed in RF waves far beyond that of a typical cellphone call.

Fagan also pointed to the American Academy of Pediatrics' concerns over RF radiation as well as a report in May from the National Toxicology Program that found "low incidences of tumors in the brains and hearts of male rats" who were regularly exposed to cellphone waves.

As a result, Fagan believes parents of students attending CPS ought be notified annually when cell towers are attached to their school — long after a local school council votes to approve the deal. He also believes LSCs should give regular consent for the transmitters to remain on the property.

He would further like for parents concerned by these towers to be allowed to transfer their students to nearby schools without towers. Fagan laid out such concerns in a letter Sept. 21 to Bogdana Chkoumbova, the head of the CPS network that includes schools in the 19th Ward.

"Parents limit their children’s exposure to substances that the FDA and EPA say are just fine for them all the time. These substances include BPA, caffeine, VOCs, aspartame, processed meats and even too much fruit juice. Not allowing parents within CPS choices is the equivalent of state-mandated exposure," Fagan said in his letter.

To be clear, the U.S. Food and Drug Administration and the Environmental Protection Agency work with the FCC to determine safe levels of RF radiation, according to the FDA's website.

In response to an email requesting further information, the trade group representing the U.S. wireless communications industry pointed to the same information referenced by CPS from both the American Cancer Society and the FCC.

The group also pointed to the World Health Organization's guidelines, which largely claim cellphones and the RF waves that power them are safe. Though Fagan noted this same study, saying the World Health Organization didn't entirely rule out a risk, saying the findings also state electronic fields used by cellphones are "possibly carcinogenic to humans."

Fagan likened the threat of RF radiation to that of smoking or asbestos, which took years to identify as dangerous thanks to powerful lobbyists and inconclusive evidence. Though he said the threat could also someday be proven false too.

"I don't know that [RF radiation] causes cancer," Fagan said. "But there certainly seems to be reason for doubt."

Fagan added that cellphone towers that were once considered lucrative have become far less valuable to individual schools. According to Passman, there are 136 cell towers at 102 schools throughout CPS. The installations generate approximately $5 million annually, Passman said.

But Fagan pointed to a 2013 move by CPS that allowed the district decided to take two thirds of the money from all the cellphone tower leases away from the schools themselves to help the cash-strapped school system.

So Sutherland is left with about $20,000 annually from its lease — or roughly about $32 per student. At Mount Greenwood, the towers bring in $20,500 to the school or about $19 per student, according to CPS data.

Fagan said he's asked that his son be allowed to transfer to Clissold, where there are no cell towers and is waiting to hear back. Meanwhile, he said he likes the smaller class sizes at Christ the King, but the parochial school wasn't his first choice.

He said one of the selling points of his Beverly home was that he would be within Sutherland's neighborhood boundaries. Now he's considering a move — perhaps to the suburbs.

He also said he bought his handheld RF meter hoping the readings showed no cause for alarm. But when the readings came back, he felt obligated to share the information. Even still, he still hopes someday his concerns are proven unwarranted without a shadow of doubt.

"Forty years from now, my son could be giving me a tin foil hat for my birthday and joking about all of this," he said.