Trump In Chicago: I'll Be 'Greatest President For Jobs God Ever Created'

SAUGANASH — Republican presidential nominee Donald Trump arrived in Chicago Wednesday morning for a breakfast meeting at the Polish National Alliance in Sauganash, where he vowed to be "the greatest president for jobs that God ever created."

After complimenting the cleanliness of the building, Trump told the crowd of Polish-Americans that he had many "loyal" Polish friends, and that he appreciated that Poland paid its bills as a member of the North American Treaty Organization.

The New York businessman, reading from a prepared text at times, took several swipes at Democratic Presidential Nominee Hillary Clinton, calling her "grossly incompetent" and saying her presidency would be "worse than four more years of Obama."

As for Trump, he would be "the greatest president for jobs that God ever created," he said.

Trump's criticism of Clinton — about 15 minutes away from where she grew up in Park Ridge — was greeted with cheers and applause by members of the invitation-only audience at Trump's speech.

But outside, Trump's reception was much chillier, as has often been the case in Chicago. The alliance's headquarters was spray-painted with graffiti directed at the New York businessman, but it had been cleaned by the time he arrived.

The visit to the city was a closely held secret: The Trump campaign did not respond to questions Tuesday from DNAinfo about whether the candidate planned to visit the Chicago less than two days after decrying Chicago's violence and likening it to a "war-torn country." 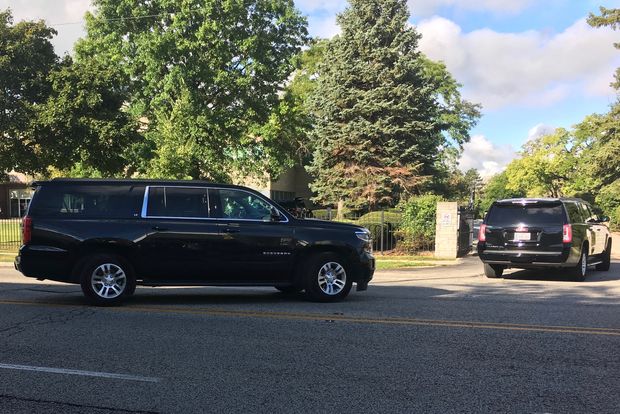 "He disparages immigrants every single day," said Monika Starczuk, a Polish immigrant. "It is not just Latino immigrants who are appalled by his statements."

Starczyk said she was appalled the organization that helps Polish-American immigrants navigate their new home would "roll out the welcome mat" for Trump.

"I am worried for those in our community who are undocumented," Starczyk said.

About a half-dozen Trump supporters also greeted the candidate, waving Polish and American flags as his multi-car motorcade rolled down Cicero Avenue.

Annette Ryan, of Jefferson Park, said she was hoping to catch a glimpse of Trump. 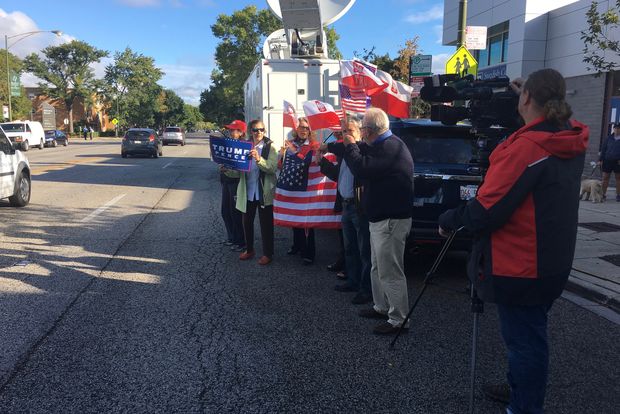 Trump's visit to Chicago was his first visit to the city since a rally was canceled in March after shoving and shouting matches broke out inside and outside the University of Illinois at Chicago's arena.

Trump has made violence in Chicago a major issue in his campaign against Hillary Clinton, condemning the number of shootings and killings in Chicago since President Barack Obama took office in 2009 and calling for stop-and-frisk to be implemented to stem the bloodshed.

He did not address violence, policing or any related issues during his remarks Wednesday.

Before his speech, Trump met with Polish National Alliance President Frank Spula and other group members.

Trump pledged, if elected, to be a "true friend to Poland and all Polish Americans."

For decades, Chicago has been the center of Polish culture and political activism in America, with the oft-repeated saying — although perhaps not entirely true, as WBEZ has reported — that there are more Poles living in Chicago than anywhere else but Warsaw, the capital city.

Trump again vowed to prevent refugees fleeing the civil war in Syria from coming to America, and said he would support a "strong Poland and strong Eastern Europe as a bulwark for security and liberty."

As left Sauganash, Trump waved briefly to the crowd gathered across the street before his motorcade left, setting off frenzy of pro- and anti-Trump cheers and jeers from the crowd that braved a cold rain to see his departure.

Trump was scheduled to appear at a fundraiser in suburban Bolingbrook later Wednesday before campaigning in Wisconsin, where he hopes to take the lead from Clinton.

Is Chicago More Dangerous Than A 'War Zone?' Not Even Close​

Chicago Top Cop To Trump: If You Have 'Magic' Plan To Stop Crime, Share It

Trump Says If Chicago Cops Were Tougher, Violence Could End 'In 1 Week'

Why Does Donald Trump Have A Chicago Street Named After Him?

A Brief History of Chicago Throwing Shade At Donald Trump

Flipping Off Trump Tower For Instagram Now Trending In Chicago