HUMBOLDT PARK — The 606's Bloomingdale Trail is offering something different for those who love the 2.7-mile-long elevated path: camping.

The Saturday event, to be held near the western end of the trail, is already filled. However, those interested can get on a waiting list in the event there are last-minute openings.

The free "Family Camping" event, sponsored by the Friends of Bloomingdale Trail in collaboration with the Chicago Park District, is set for 4 p.m. Saturday to 11 a.m Sunday. It is the first time the event has been offered.

"Take a nature hike, see the stars, learn basic camping principles, and enjoy a campfire with ghost stories and s'mores," the organizers say, touting the first such camping event for the trail.

Camping equipment will be provided and Park District officials are providing security and a portable bathroom.

The camping area is located above St. Louis and Bloomingdale Avenue, which is accessible from a ramp at 1800 North Spaulding Avenue in Humboldt Park.

Each tent can fit up to four family members and a parent or guardian must participate, according to the Park District, which says "teams should include at least one child and one adult."

A spokeswoman for the Trust for Public Land, a land conservancy group that assists the Park District with trail operations, said "the goal is to get people outdoors and give families the opportunities to learn how to camp."

Friends of the Bloomingdale Trail, a group that helps to organize volunteers for trail events, created a colorful badge for participants.

Part of a larger Chicago Park District system dubbed The 606, named for the first three numerals of the zip code all Chicago residents share, the trail has 12 spots where folks can hop on or off.

Running from Bucktown and Wicker Park on the east to Logan Square and Humboldt Park on the west, the trail is the city's first park that also functions as a commuter route.

Earlier this year, The 606 won a national award from the American Planning Association, which described the park system as "a stunning example of a community working together to realize a dream and create a city-wide attraction from underused city infrastructure." 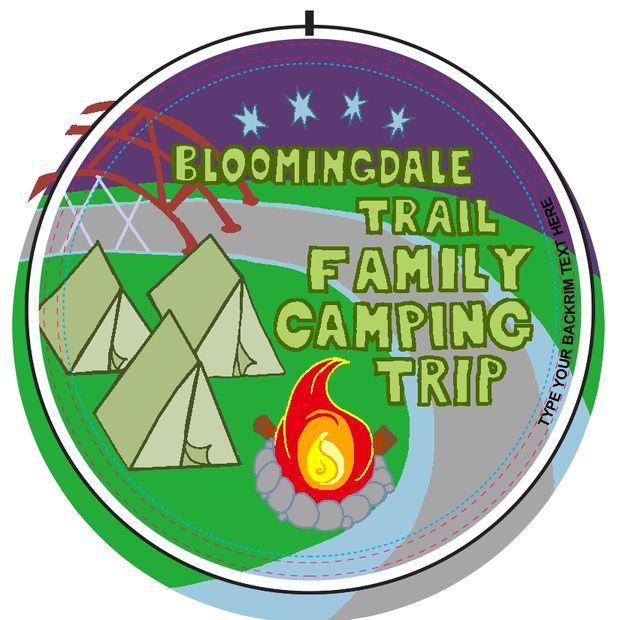 Badge for the trip, created by Friends of the Bloomingdale Trail [Ben Helphand]