The crowd that filled the room — lining the walls and spilling out the front door — obliged. And several parents and teachers gathered supported a proposal authored by Ald. Matt O'Shea (19th) designed to alleviate overcrowding at 10841 S. Homan Ave.

"As we progress, the numbers are growing, and more space is needed," said Reidy, who opened the meeting by sharing enrollment figures for the her school.

She said the school's enrollment has swollen from 581 students in 2008 to 1,112 students this year. Two building additions totaling $13 million have been added to accommodate the increase. The new buildings were filled on the day they opened, and more enrollment growth is expected, Reidy said.

O'Shea said there is no more room to build at Mount Greenwood Elementary, which can accommodate 990 students. That's why he's proposing the school take over the campus of the Keller Regional Gifted Center, which is just 3½ blocks away at 3020 W. 108th St.

Keller would be moved to 9241 S. Leavitt St., now the home of Kate S. Kellogg Elementary School. O'Shea has said that Kellogg and nearby Sutherland elementary school in Beverly have seen declining enrollment by neighborhood residents in recent years. So O'Shea wants to merge the two schools on Sutherland's campus at 10015 S. Leavitt St.

The merger would be phased in over roughly three years. O'Shea said he believes Sutherland, built to accommodate 504-756 students, can handle the merger, particularly as enrollment is projected to continue to decline. 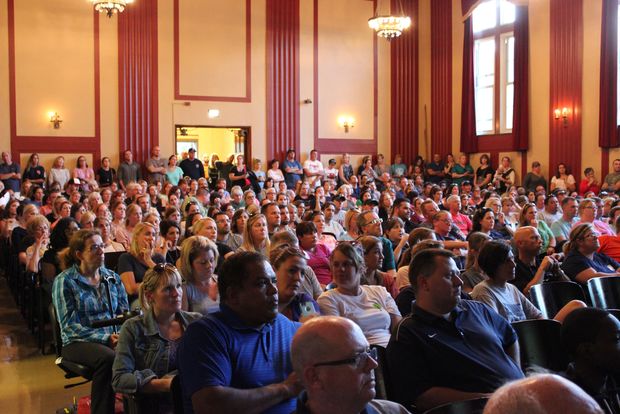 The auditorium at Mount Greenwood Elementary School was filled by parents, teachers, students and residents of the 19th Ward Thursday night. A proposed school restructuring plan would add a second campus to ease overcrowding at the school. [DNAinfo/Howard A. Ludwig]

This year, Sutherland has 610 students. Kellogg has 240 students, according to O'Shea.

The money saved by moving the schools around would then be pumped into Esmond Elementary School in Morgan Park. Esmond, 1865 W. Montvale Ave., has old buildings in dire need of repair or replacement, O'Shea said.

The plan has been panned by parents at the Beverly schools but found support at Mount Greenwood Elementary.

Erin Murphy has worked at as a Mount Greenwood Elementary librarian for 10 years. She's taught library classes on a roving cart, in the hallway and in a traditional library in her time at the school.

Murphy pushed for a long-term solution to the problem of overcrowding, as did others who offered concrete examples, including complicated lunch and recess routines designed to handle the crowds. Some called for help on the behalf of teachers, who are nearly overwhelmed by class sizes.

Several parents at Sutherland decried the plan for the same reasons. They said the merger with Kellogg would merely shift overcrowding from Mount Greenwood to Beverly. Sutherland continues to operate at an "efficient" level according to CPS, and the school would like to keep it that way.

Laurie Cleary is a member of the local school council at Sutherland. She admitted that enrollment at the school has slumped since the installation of Principal Eric Steinmiller in 2014, but she said she thinks the school will rebound, and the proposed merger could hinder that turnaround.

"Sutherland deserves a chance to get back on its feet," Cleary said.

Several people in the crowd called for an independent audit of the numbers being used to justify the merger. And still others renewed their call for a joint task force to explore alternative options beyond those presented by O'Shea. 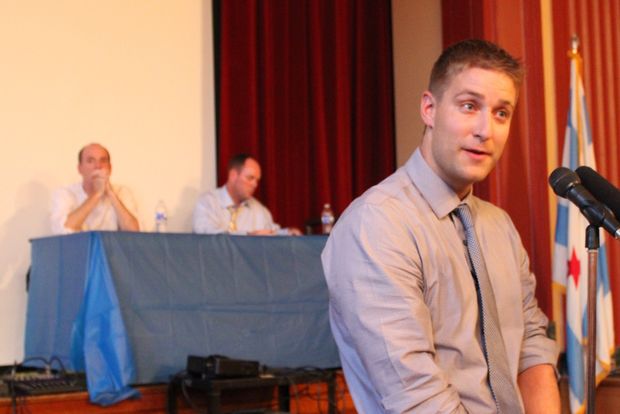 Mike Foran said Thursday night he has 38 students in his seventh-grade homeroom class at Mount Greenwood Elementary School. Foran is in his sixth year at the school and said he's seen a dramatic increase in enrollment. [DNAinfo/Howard A. Ludwig]

Margaret LaRaviere wept as she described her "amazing fourth-grader" at Kellogg. She questioned whether there were racial undertones to O'Shea's plan, saying Kellogg has been labeled as not truly a "neighborhood school" although about 70 percent of students at Kellogg live within the school's boundaries.

Meanwhile, neighboring Christ the King is viewed as a neighborhood gem, despite 78 percent of its student population hailing from North Beverly, she said.

LaRaviere suggested that for some, the perception of a "neighborhood school" may be influenced by its racial composition. Kellogg is a majority black school — 83 percent, according to CPS — while the Catholic school at 9240 S Hoyne Ave. is majority white.

"I don't think any school should be overcrowded," LaRaviere said. "I ask that you join us in enacting a solution that is fair and equitable to everyone."

Jim Neeson was the final speaker of the evening. To loud applause, the LSC member at Mount Greenwood Elementary credited Reidy and her leadership team for the school's success and its booming numbers.

Reidy concluded the meeting by thanking the audience for their participation and deflecting the praise back to many who had gathered.

"The reason Mount Greenwood School is so awesome is because of my teachers, my students and my parents. I'm just the one driving the bus," she said.