RIVER NORTH — Police are looking for a man they say followed and assaulted a woman while she was jogging next to Merchandise Mart early Saturday morning.

Around 5:50 a.m., the woman was jogging in the 200 block of West Kinzie Street when a man began to follow her, according to a community alert issued Wednesday.

The man then grabbed the woman by her neck, choked her and threw her to the ground, police said. He ran away when someone passed them.

Police described the suspect as a white man in his mid-20s, standing between 5-feet-6 and 5-feet-10 with a medium build. On Saturday he was wearing a black baseball cap, a black T-shirt, khaki shorts and black shoes. 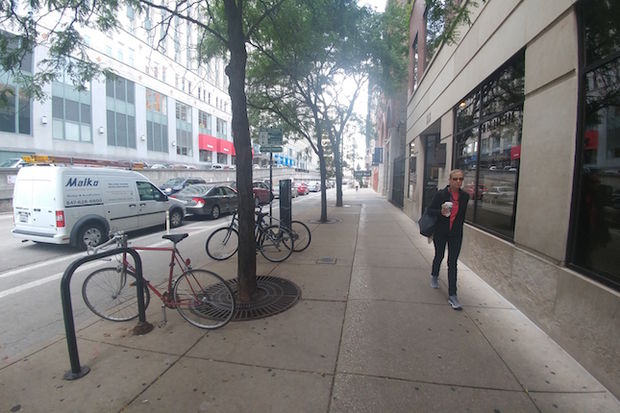 "This is a safe block," one woman said of the 200 block of West Kinzie Street. [DNAinfo/Alex Nitkin]

Bars and retail stores line one side of the street, and one side of Merchandise Mart towers over the other side.

On Wednesday morning, baby sitter Angelika Mulica pushed a stroller down the block, brushing past postal workers and businessmen.

"I can't believe that would happen, it's always been very safe here," Mulica said. "I've heard about that stuff happening over by the lakefront, but never here. This is a safe block."

But Aileen Brown, a bartender at the Shamrock Club, 210 W. Kinzie St., said she was less surprised.

"It doesn't happen much around here, no, but it does happen a lot," Brown said. "And around that [early morning] time is when it tends to happen, too."

While violent crime isn't common near Merchandise Mart, she said, an influx of new businesses and apartments in the area may make it more likely.

"There are a lot of people who hang around bars and try to take advantage of drunk people," Brown said. "It's what happens when an area starts to become more popular."

It hasn't been enough to faze Emma Calder, a commercial real estate saleswoman who moved to the Loop from northern England in March.

"When I moved here my parents freaked out; they were convinced it was the murder capital of the world, but it's been pretty normal so far," she said. "So far it seems a lot like London — keep your guard up, and you'll probably be fine.

"The only thing is that there are a lot of pickpockets and stuff in London, but no guns," she added. "Here, I have this fear that everyone I walk past could pull a gun out of their pocket."

Anyone with information on the suspect or the incident is asked to call detectives at 312-747-8380.