Once built, the tower will be the third-tallest in Chicago and the tallest in the world designed by a woman.

"This is a great day, but it will be even greater when we cut the ribbon a few years from now," Emanuel said.

Construction crews already have been preparing the development site at 381 E. Wacker Drive for weeks in advance of the formal groundbreaking.

Magellan officials told guests Wednesday that 125 units are under contract at the future skyscraper.

"Without the buyers, we know we wouldn't be here today," David Carlins, Magellan's president, said.

At 1,144 feet, Vista would be the third-tallest building in Chicago, trailing just Willis Tower and the Trump International Hotel & Tower.

Emanuel and other officials said Wanda had considered New York and Los Angeles for the tower, but decided on Chicago because of its "stable" business and industrial climates, reputation for great architecture, and direct flights to a number of Chinese cities.

"We quickly recognized a lot of the opportunities in Chicago," said Chen Guocai, vice president of Wanda Commercial Properties. "This tower is a $1 billion vote of confidence in the City of Chicago."

Gang, a MacArthur fellow who designed the award-winning Aqua tower near the proposed Wanda site, said the project is inspired by the frustum shape seen in ice cubes or Toblerone chocolate.

Together, the three frustums will create eight corners at street level, but the tallest part of the building will be the skinniest among its super tall peers in Chicago. Gang said the thinness of the tower will enhance exposure to natural light and cast less shade below.

The tower also will have an underpass connecting the rest of Magellan's massive Lakeshore East neighborhood to Wacker Drive and the Chicago River, a sticking point for Reilly and Gang.

"A lot of times we think about tall buildings as an icon, but in a way they're adding a public space," Gang said. "These buildings change the skyline but they also come down to the ground." 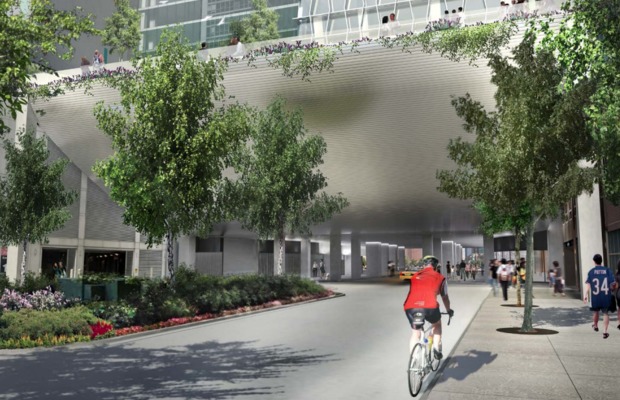 A rendering of the Vista underpass. [Magellan]

Work will last from about 8 a.m. to 8 p.m. daily during the massive construction project, which will bring road closures and other traffic issues over the next few years.

Neighbors' access to the Chicago Riverwalk through Lower Field Boulevard already has been closed, and other thoroughfares, including Wacker and Waterside drives will be affected as well.

Vista Tower Construction To Begin Within 'Next Week Or Two,' Developer Says

This 93-Story 'Luxury' Tower Is Coming To Wacker Drive (PHOTOS)