JEFFERSON PARK — Ald. John Arena (45th) said Friday afternoon he would back a proposal that will transform a long-vacant former concrete company storage facility across the street from the Jefferson Park Transit Center into a 48-unit apartment complex.

First proposed in 2014, the proposal near Argyle Street and Long Avenue became a flashpoint in the 2015 aldermanic election and a fierce debate over whether Jefferson Park should remain a suburban-like haven or allow denser developments near transit hubs and business districts.

"Were the building proposed even a block north or east of Long and Argyle, I would not support it," Arena said in a statement. "However, this location, with direct access to transit, is perfect for a multi-unit building appealing to young professionals looking for quick access to the Loop and O'Hare."

While opponents of the of the two 3½-story 24-unit apartment buildings said it would destroy the fabric of their single-family neighborhood, supporters said it would give the struggling Jefferson Park Business District a boost by increasing the area's density.

The two-bedroom apartments are expected to rent for between $1,600 and $1,900 per month. If approved by city officials, five of the apartments would be set aside for low-income residents, as required by the city's affordable housing ordinance.

The project includes 48 parking spots and two guest spots on the ground floor. That is more parking than is required because the project's proximity to the transit center means it qualifies as a transit-oriented development, according to city law. 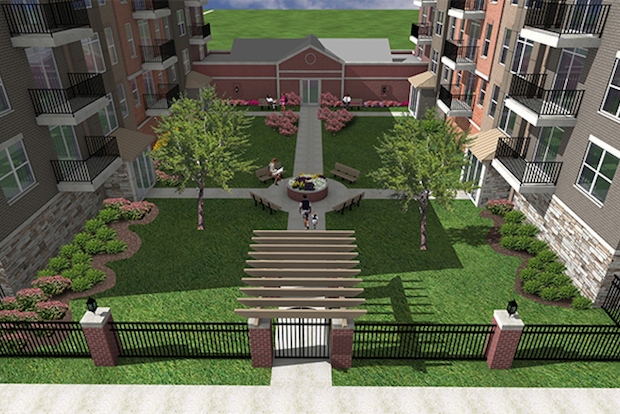 Before the housing crisis in 2008, seven single-family homes were planned for the site. Under the current rules governing the property, only 18 apartments could be built.

There are blocks of single-family homes north and northeast of the proposed development, with apartment complexes close by on Northwest Highway.

A community meeting about the project in May turned contentious, with Bob Bank, president of the Jefferson Park Neighborhood Association, warning Arena that the project would "wreck" the neighborhood by making it impossible to find a parking spot and snarling traffic.

However, But Ryan Ritcher, the co-founder of Jefferson Park Forward, said the development would give the business district "a shot in the arm."

When it was originally proposed, the development was one story taller.

"After considering all the feedback we received during and after the community meeting, I support the construction of this project," Arena said.

Construction could begin as early as the spring, Arena said.