LAKEVIEW —  Unabridged Books has outlived two corporate superstores and a discount chain as it celebrates its 36th year at 3521 N. Broadway.

And while owner Ed Devereux said he prefers to continue selling books to loyal customers and simply ignore the latest behemoth opening up shop in his neighborhood, he did join 15 other Chicago-area booksellers in criticizing Amazon's plans to put its first brick-and-mortar bookstore in the city in Lakeview.

The joint statement issued Wednesday addresses the benefits of independent booksellers and the impact the massive online superstore has had on community businesses.

The shops, scattered across Chicago from Hyde Park to Lincoln Square and into the suburbs, "pride themselves on serving customers who read voraciously and eclectically and on using books to create a conversation with customers and their communities," the statement reads.

The statement cites a January report co-sponsored by the American Booksellers Association that accused Amazon of skirting sales taxes and costing Illinois an estimated $59.8 million in revenue in 2014. Another study found the company's presence has resulted in a net loss of 7,800 retail jobs in the state, the letter says.

"In Illinois alone, the numbers are shocking," the statement says.

Women & Children First set up a display in its window with a similar sentiment.

"Just when indie bookstores are regaining the business they'd lost to two predatory national chains ... along comes Amazon to take another bite out of our business," said Lynn Mooney, co-owner of the Andersonville shop that used to be in Lakeview.

But Mooney also saw the irony in the online retailer's plans for a brick-and-mortar location.

"I choose to think of it as the ultimate compliment, though — that a profit-driven corporation like Amazon is trying to copy our business model," she said. "I don't know if they can copy our commitment to community building, sustainable local economies, social activism and free speech and the free exchange of ideas, so I'm confident we'll come out stronger in the end."

While Amazon said it will base its store selection on online customer reviews and popularity, "booksellers get to know their customers so that they are able to make personal recommendations that enrich and sometimes change people's lives," the shop owners wrote in their statement.

Devereux doesn't see that changing — with or without Amazon Books.

"Their space might look similar to my space, but what we're doing is totally separate," he said.

And he said for the most part, he plans to ignore Amazon and just forge ahead.

"We go about our business and sell books the way we love selling books," Devereux said. "If we always played the role of David versus Goliath, it would get pretty exhausting."

Read the full statement below:

In response to news that Amazon will open a brick-and-mortar store in the Lakeview neighborhood of Chicago next year, the independent bookstores of Chicago and the Chicago area unite to issue the following joint statement.

The Amazon announcement represents an opportunity to expand the conversations indie booksellers have been having for years with customers about sustainable publishing, bookselling, and retailing, as well as sustainable communities. Sarah Hollenbeck, co-owner of Women & Children First in Andersonville, explains that "Chicago's independent bookstore community works hard to bring authors to Chicago, as well as to highlight local authors and work with local businesses. Events held in our stores strengthen community bonds, as well as provide safe spaces where people can meet, share ideas, and debate issues."

Whereas Amazon's initial choice to sell books was largely for the purpose of collecting customer data, independent bookstores pride themselves on serving customers who read voraciously and eclectically and on using books to create a conversation with customers and their communities. Booksellers get to know their customers so that they are able to make personal recommendations that enrich and sometimes change people's lives. In addition, independent bookstores collect--and have always collected--full sales taxes as required by law, thereby supporting schools, fire and police departments, and state and local governments generally. Amazon has also begun collecting and paying sales taxes, after being forced to by lawsuits and negative public opinion.

Industry experts speculate that the purpose of brick-and-mortar Amazon stores is to continue to collect information that would aid Amazon in future non-book sales endeavors. To Chicago's independent bookstores, customers are not just instruments for data collection to enable future sales; rather, customer support is the lifeblood that helps sustain both the stores and the vital communities those stores create. 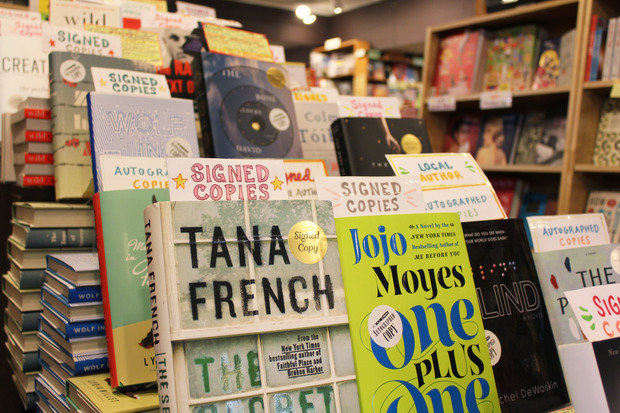 Booksellers also cite the recent study "Amazon and Empty Storefronts," a report issued in January 2016 that quantified, for the first time, how billions of dollars' worth of Amazon sales are rapidly imperiling the future of brick-and-mortar downtowns and viable shopping districts, along with the property taxes, employment opportunities, social engagement, and the sense of "place" that small businesses provide in their communities.

Co-sponsored by the American Booksellers Association and the research firm Civic Economics, the report was designed to provide policymakers and consumers with a better understanding of the effect at the state and local levels of the growth of online retail as a substitute for storefront purchases. At the national level, its findings are staggering:

• In 2014, Amazon sold $44.1 billion worth of retail goods nationwide, all while avoiding $625 million in state and local sales taxes.

• That is the equivalent of 31,000 retail storefronts, 107 million square feet of commercial space, which might have paid $420 million in property taxes.

• A total of more than $1 billion in revenue lost to state and local governments, $8.48 for every household in America.

• Even counting all the jobs in Amazon distribution centers, Amazon sales produced a net loss of 135,973 retail jobs.

According to an earlier Civic Economics study called "Local Works!", dollars spent in locally owned businesses continue to circulate locally and enrich that community. For every $100 spent in a locally owned business, $68 stays in that community; but for every $100 spent in non-local businesses, only $43 stays in the community. Over a period of years, that $25 difference can mean millions of dollars siphoned away from local communities to corporate headquarters.

Amazon is known for its low prices and convenience. However, as booksellers at Bookends & Beginnings in Evanston point out, "What's largely invisible is the price we're really paying for that kind of convenience, if we ignore the likely consequences of Amazon's snowballing monopolistic practices." In Illinois alone, the numbers are shocking. The study estimates that in 2014, Amazon sold more than$1.8 billion worth of retail goods in Illinois. That is the equivalent of 1,289 retail storefronts, 4.5 million square feet of commercial space, which might have paid $23.6 million in property taxes and more than $59.8 million in revenue lost to state and local governments. Even counting all the jobs in Amazon distribution centers, Civic Economics finds that Amazon sales produced a net loss of 7,802 retail jobs in Illinois.

The list of Chicago and Chicago-area stores, as well as our regional booksellers' association, endorsing this statement: