Chicago Apartments Are Now Nearly As Expensive As Honolulu's

CHICAGO — Apartment prices are on the rise again in Chicago, making it the 10th most expensive American city to rent in.

Zumper’s National Rent Report for September, which covers 100 cities nationwide, showed an overall drop nationally for one and two bedroom apartments, but some cities fell more than others — and in Chicago, prices remained steady or climbed.

Now, a median one bedroom apartment in Chicago is only about $10 cheaper ($1,750) than a one bedroom in Honolulu. We hear the weather is decent there, too.

But if you're looking for a two bedroom, be prepared to pay more than you would in Honolulu, Miami, Boston or San Diego. Median rent prices for two bedrooms in Chicago jumped nearly 4 percent to a median of $2,610, Zumper reports.

The Zumper National Rent Report analyzes rental data from over 1 million active listings across the country. Data is aggregated on a monthly basis to calculate median asking rents for the top 100 metro areas by population, providing a comprehensive view of the current state of the market, according to the company.

While a 4 percent spike in two bedroom listings sounds pretty bad, Chicago prices pale in comparison to the top of the pricey rental list. In San Francisco, the most expensive in the nation, a median two bedroom apartment rents for a staggering $4,800. New York, Boston, Washington, D.C. and San Jose, CA are also in the top five most expensive rental markets, Zumper reports.

Nationally, rental prices overall have trended down. Both one and two bedrooms fell simultaneously for the first time this year; one beds dropped 0.8 percent to $1,146, while two beds decreased one percent to $1,358, the study stated.

Check out the stats from Zumper here: 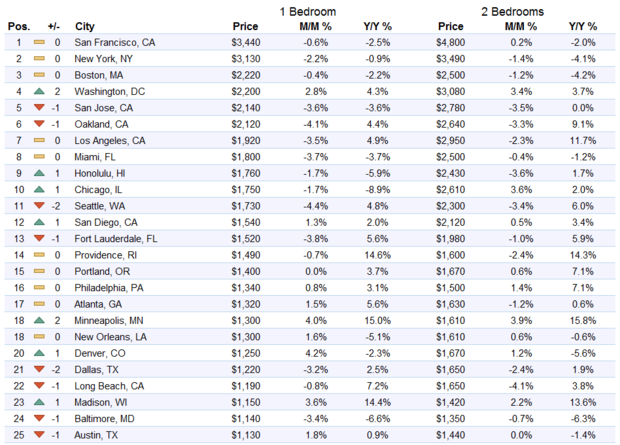