Why Does Donald Trump Have A Chicago Street Named After Him?

RIVER NORTH — Michael Jordan Place runs along Madison Street, right by the arena where he led the Bulls to six championships.

Oprah Winfrey Way is dedicated at 100 W. Carpenter St. near the now-demolished Harpo Studios, while Taylor Street between Carpenter and Aberdeen is known as "Al's Italian Beef Boulevard," named for the famous beef stand there.

City officials for decades have dedicated thousands of streets honoring people ranging from celebrities to otherwise unsung activists who bettered their communities.

Guess who else has a Chicago street named for him? Donald Trump. 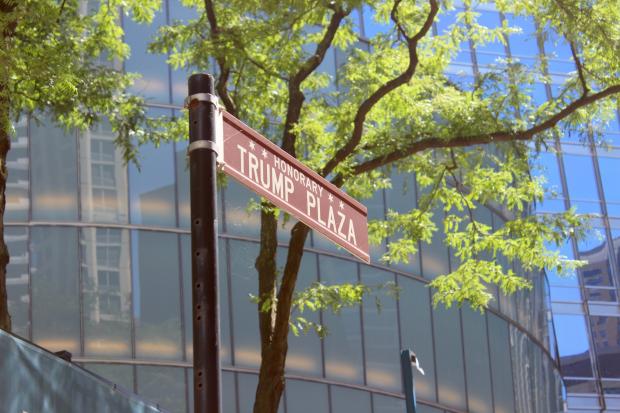 Those passing by the sign recently were puzzled it was there.

"It doesn't mean anything, but there shouldn't be a street named after [Trump]," one passerby said.

"What did he do for Chicago?" another asked.

Considering Chicago hasn't exactly been friendly to Trump, with many tourists and others going out of their way to pose in front of his tower with a middle finger in the air, it was puzzling to some that the designation was ever made.

City records show former Ald. Burt Natarus (42nd), introduced legislation for the honorary street in June 2006, when the 92-story high-rise at 401 N. Wabash Ave. was still under construction. An online brochure shows the sign went up that October.

Natarus, who left office in 2007, couldn't be reached for comment. A search of campaign contributions doesn't reveal any donations from Trump or his affiliates to Natarus. 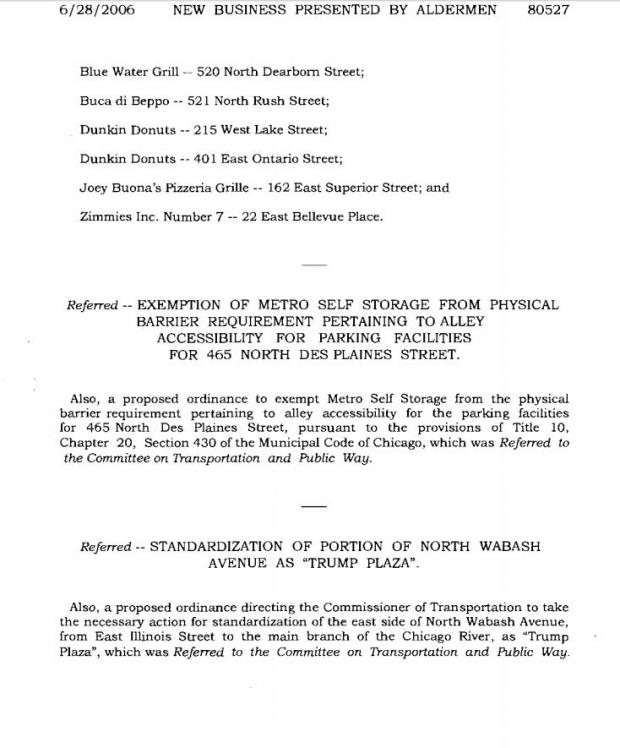 When the sign went up, it's doubtful anyone could have predicted Trump's rise from real estate mogul to reality star to Republican presidential nominee. And the current alderman overseeing Honorary Trump Plaza said there's no way it would have been approved by him.

"No, I would not have dedicated an honorary street to Trump, those special honors belong to important Chicago residents," Ald. Brendan Reilly (42nd) said in an e-mail. "Regardless of his politics, he's a New Yorker."

But, at this point, he has no plans to remove the sign.

"This issue does not even make my top 100 list of priorities. I've got much bigger issues to manage Downtown," Reilly wrote.

The honorary sign came before Trump's verbal jabs at City Hall two years ago, when he made public his plans to spell his name in 20-foot-tall letters on the side of his riverfront skyscraper. The large and controversial sign was approved along with the tower a dozen years earlier, but Mayor Rahm Emanuel quickly moved to change the signage laws along the Chicago River once the it went up.

That was after Emanuel called Trump's sign "architecturally tasteless," prompting a response from the celebrity real estate developer:

Before I bought the site, the Sun Times had the biggest, ugliest sign Chicago has ever seen. Mine is magnificent and popular.

Trump's divisive presidential campaign has since stoked outrage here, and a Trump rally planned at the University of Illinois-Chicago in March was famously canceled after protesters overran the venue.

Reilly said removing the sign would "simply require an ordinance to repeal the designation," but made it clear he wouldn't be the one drafting it.

A spokeswoman for the New York-based Trump Organization did not return a message seeking comment.

A Brief History of Chicago Throwing Shade At Donald Trump

Flipping Off Trump Tower For Instagram Now Trending In Chicago