Nine TV Shows Are Filming In Chicago Right Now: Here's Where to Find Them

There are at least nine different TV shows filming within the city limits this week. That's a record number of TV shows filming here at the same time — and a figure that doesn't include the movies shooting here as well — according to officials with the Chicago Film Office.

And while filmmakers certainly like to show off Chicago's skyline, a map of film permits here show they're out in the city's neighborhoods, too:

"APB," a new cop show from Fox, blew up a car Wednesday near Douglas Park. "Shameless," the Chicago-set family drama on Showtime, has been in North Lawndale all week as well as various spots Downtown. "Empire" is hitting up the south and west sides to film barbershop scenes.

And then there's the Dick Wolf "Chicago" franchise on NBC, which beginning next month will include "Justice" in addition to "Fire," "PD," and "Med."

"Patriot," a new show from Amazon; "Ozark," a new Netflix show starring Jason Bateman; and Fox's "Exorcist" are all here, too.

The city only issues permits for filming on the public way.

"Success breeds success," said Ken Wysocki, a lawyer who moonlights as the handler of the Filming in Chicago Twitter account. 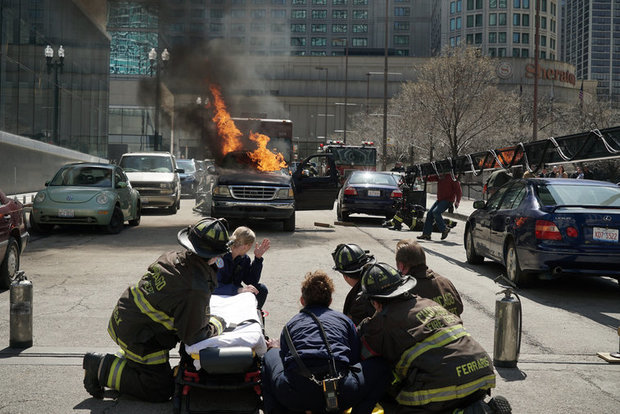 "Chicago Fire" is one of nine TV shows being filmed in Chicago this week.

Here's why: like Georgia — another state with a booming film industry — Illinois offers filmmakers up to 30 percent tax credits. Dick Wolf's shows have been a hit for "NBC" and "Empire" has been Fox's highest-rated show in years — a success other networks want to replicate.

The city's architecture — whether it's the Loop's "skyscraper canyons" or quaint row homes in the neighborhoods, are also a draw.

RELATED: Critics Weigh in on Made-in-Chicago Obama Date Movie 'Southside With You'

Show business generated $330 million in local revenue last year, an 18 percent increase from 2014, according to the Tribune. That figure should rise again this year with more shows on the way: a cooking program from Viceland starring rapper Action Bronson and Spike TV's "Bar Rescue" have permits to film here next month.

"It's really crazy how much stuff is here this week, it's insane," Wysocki said.

What to know if you go

A ton of production assistants will shoo bystanders along to keep them out of shots, so "you don't want to do anything that is going to make the job harder for the crew," he said.

"If they tell you to get on the other side of the street, just do it," he said.

But most of the time crews are amenable, and oftentimes fans get a chance for a photo with the stars.

"Just be polite, be patient, be calm," Wysocki said.