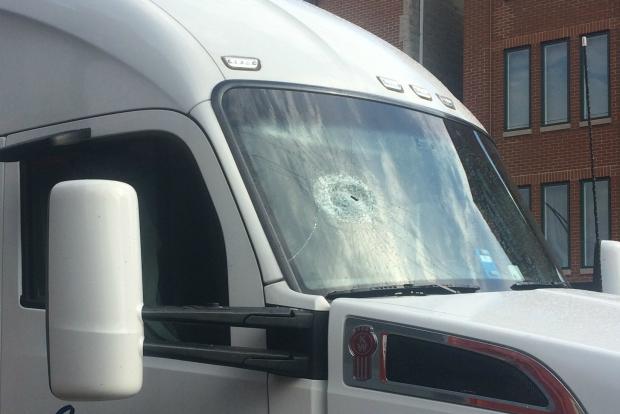 ​ This truck was parked in the Milwaukee Avenue bike lane Wednesday morning when a cyclist smashed its windshield, according to a witness. [Provided to DNAinfo]

CHICAGO — Bicyclists using one of the country's most popular bike lanes have been upset since 20-year-old Lisa Kuivinen was killed in River West during rush hour Tuesday morning.

Their frustration was on display Wednesday morning, a woman said, when a bicyclist smashed the windshield of a truck in the 800 block of North Milwaukee near where Kuivinen was hit and killed the day before.

The truck was parked in the bike lane on Milwaukee Avenue Wednesday morning, which seemed problematic and insensitive to bicyclists so soon after Kuivinen's death, said a woman who said she witnessed the windshield-breaking incident.

The woman, who asked to be identified as Maria, said she had been riding by on her bike when she stopped to take photos of the construction site, frustrated to see trucks and equipment parked in the bike lanes surrounding it. She had just finished speaking to a driver and was taking photos when she heard glass breaking and saw a man standing near the window of the truck, she said.

"He didn't speak. He didn't say anything, but he was clearly angry," Maria said. "I understand his frustration, but I don't necessarily agree with his execution."

Maria yelled at the man to stop and he hopped on his bike and rode off, she said. 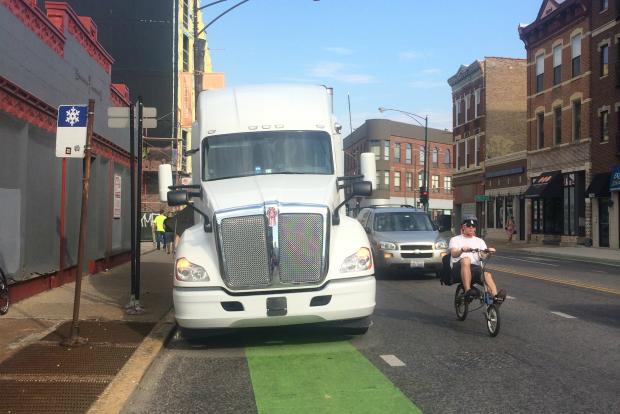 ​ This truck was blocking the Milwaukee Avenue bike lane Wednesday morning. A witness said a cyclist smashed its windshield shortly after this photo was taken. [Provided to DNAinfo]

Others bicyclists looked over the construction site as they rode by. Though the truck that hit Kuivinen was no longer on scene, she said the bike lane has been blocked by construction equipment for two months.

"My initial thought was it was so insensitive ... that no one on site had made any effort to alleviate the feelings of the cyclists or anyone who had been passing that site," Maria said.

The fatal crash came during the Tuesday morning rush on Milwaukee Avenue, which is regularly packed with cyclists heading Downtown for work. Kuivinen was in a bike lane approaching a construction site when the Rolling Meadows native was hit by the 18-wheel flatbed truck.

The driver of the truck was ticketed for driving in a bike lane and failure to take due care with a bicyclist.

Jim Merrell, a spokesman for bicycle advocacy group Active Transportation Alliance, said the area sees a "huge amount of bicycle traffic." He and Yasmeen Schuller, president of online bicyclist community The Chainlink, said the street is one of the most popular bike lanes in the United States.

"Many cyclists feel safe on a bike lane like Milwaukee Avenue because of its popularity and the large number of cyclists they share the bike lane with," Schuller said. "There is a feeling of safety in numbers." 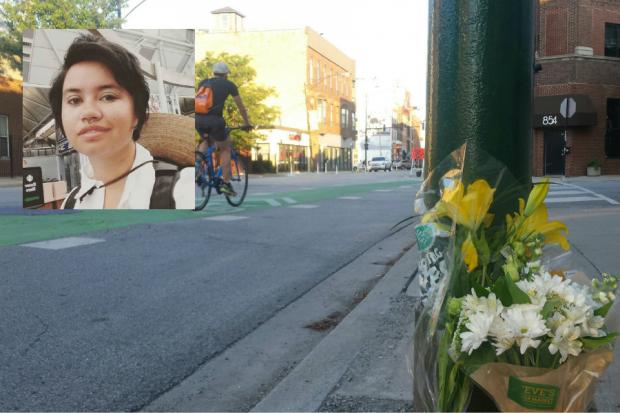 ​ Flowers were left Tuesday night where Lisa Kuivinen (pictured) was struck and killed by a semitruck Tuesday morning. [Facebook/DNAinfo]

Though Merrell said he was not certain what happened in Tuesday morning's crash, he said Active Transportation Alliance is committed to ensuring that there's safe accommodation for bicyclists and pedestrians when construction shuts down bike lanes or sidewalks.

Jeff Miller, who lives around the corner from the construction site, emailed Ald. Walter Burnett (27th) on Aug. 4 expressing his concern about intersection, cautioning " it’s only a matter of time before someone gets hurt."

There is "literally no space for bicycles to go around that project causing them to also swerve into traffic," Miller wrote.

Miller said Burnett's office replied that they would "investigate the situation."

On Wednesday, a spokeswoman for the alderman said CDOT "is doing an investigation, the details of which should be out by the end of the day today."

Early Wednesday, a cyclist commuting to work Downtown said he was almost struck by a truck while riding through the construction site.

He provided a photo of the cyclist ahead of him, who was between two trucks. 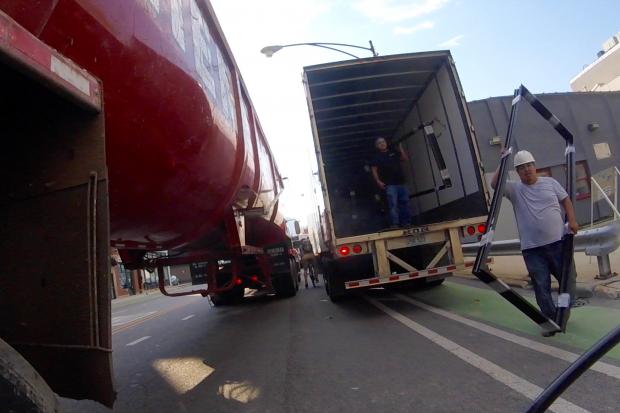 ​ A cyclist between two trucks Wednesday morning at a construction zone for a new apartment building at 830 N. Milwaukee Ave.

"Here is what it looked like today. More people are going to die there if this continues, the truck on the left almost killed me TODAY," he wrote, requesting anonymity.

The construction company, Fulton Market-based Summit Design & Build LLC, submitted an application to CDOT on May 18 for "curb lane & bike lane closures at 830 N. Milwaukee for 30 days" after being told that the sidewalk and crosswalk must be left opened, according to city records.

CDOT did not respond to questions about the request or the status of Summit's permit.

Developers Akara Partners are building studio, one- and two-bedrooms units dubbed "LINKT" at the site. The transit-oriented apartment building near the CTA Blue Line L station, is scheduled to open next spring, according to a June news release highlighting the site's Gigibit Internet service provider.

Executives from Akara Partners were not immediately available for comment early Wednesday.

Lisa Kuivinen, Bicyclist Killed In Crash, Was 'A Radiant And Shining Star'