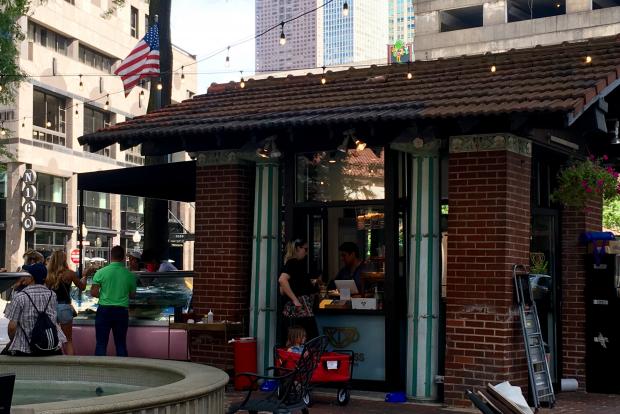 Black Dog Gelato, a small pink stand that opened next to Bow Truss Coffee in Mariano Park, is the subject of complaints from some Gold Coast residents. [DNAinfo/Janet Rausa Fuller]

GOLD COAST — Gelato-gate is heating up.

Gold Coast residents who frequent Mariano Park, a picturesque little plaza at State and Rush streets, clamored for weeks for new park tenant Bow Truss Coffee to bring in the gelato that was promised them.

In mid-July, they got their wish with the addition of Black Dog Gelato, known for its unusual flavors and supplier to some of the city’s best restaurants.

Janet Rausa Fuller is on the frontlines for Gelato-gate.

But, these residents now say, it isn’t good enough for their tony neighborhood.

The complaints, sent via email last week in response to questions from DNAinfo, cite everything from the texture of the gelato, to Bow Truss owner Phil Tadros' inaction, to the appearance of the Black Dog stand, essentially a freezer case stationed under an awning next to the Bow Truss kiosk.

Brian Dryer, a Gold Coast resident for nearly 20 years, called the pink stand an “IKEA shack” with inadequate signage and “no smiles at counter it’s terrible."

“Watch the gelato there once it was served as Gazpaucho [sic]," wrote Cara Kempton, another neighbor.

The park “needs to be updated end of story. We don’t deserve what is being offered right now as dessert,” said Judi Steinreich, who appears to be one of those leading the charge leveled at Bow Truss owner Phil Tadros.

"Coffee is one thing and it's good coffee. The dessert and supplemental items need to be updated and added to. We understand the Gelato there now is not [Tadros'] business and can be modified which it needs to be as soon as possible. Sanitation is improper, service improper and temperatures improper,” Steinreich said.

Their latest salvo: collecting signatures to try and boot Black Dog and bring in a different gelato vendor — specifically Amorino, a few blocks away at 838 N. State St. Some residents met privately on Friday to discuss the issue.

It’s unclear what, if anything, they plan on doing with the signatures (when asked how many signatures there are, Steinreich said via e-mail, “A LOT”) or whether this petition of sorts will make a difference. 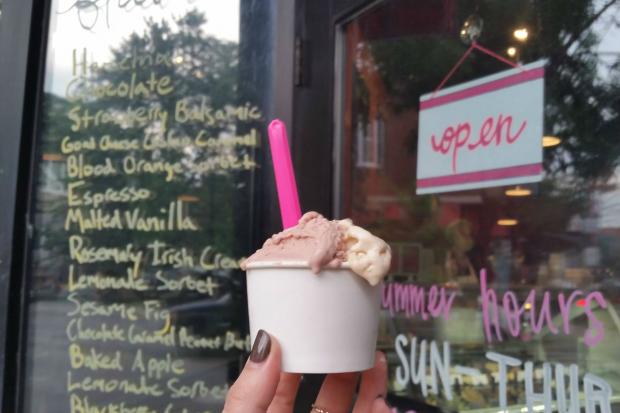 Bow Truss, which was awarded the concessionaire permit last November, replacing 13-year tenant Whispers Cafe, can keep or change the vendors it works with as it sees fit, without input or involvement from the public or the city, according to a Park District spokeswoman.

And Tadros, who described the situation as “kind of like ‘Best In Show’ and ‘The Twilight Zone,’ “ said he isn't intent on changing the gelato.

“It’s up to us, but we’re not going to reward a group of people for their inappropriate behavior and be bullied,” Tadros said.

He complimented the gelato at Amorino, a Paris-based gelataria, but pointed out that the shop is only three blocks from the park.

The gelato at Black Dog is as top-notch as owner Jessica Oloroso’s reputation as a business owner, and if people disagree, their wallets are saying otherwise, Tadros said.

"We sell out of it. Our numbers are good,” he said. “They’re creating this crazy drama that just seems unnecessary.”

He said what really irks him is that those who have emailed and texted him relentlessly with complaints refuse to answer when he calls them.

“We’re talking about a taste preference, we’re talking about both great brands and we’re talking about something that doesn’t need to be an issue. And more importantly, the way they're doing it is so obnoxious that I’ve yet to have an intelligent, face-to-face conversation with anybody. No one will pick up the phone and talk about it,” Tadros said.

Nor have unhappy residents made their criticism known directly to Oloroso, who called the situation “disheartening” and said she is making every effort to put out the best gelato she can.

She said earlier problems maintaining the freezer temperature on extremely hot days have been corrected, though the weather will always be a factor that’s out of her control.

“Doing an outside venue where we don’t have the infrastructure of a store is a challenge, and there have been adjustments we’ve had to make,” she said. “There’s absolutely nothing I can do about 100-degree weather or 95-degree weather and keep the product beautiful, so we are handling the elements as best as I think we can.”

Told about complaints about the aesthetics of the stand, Oloroso said there’s no permanent printed menu at Mariano Park, or in any of her shops for that matter, because of how often she changes flavors. The flavors of the day at the park are hand-written in marker on the glass case.

She said it was a conscious decision not to post the Black Dog logo in the park.

“Philip asked if I wanted to and I said let's hold off from putting it up in their faces that this is a Wicker Park company, or whatever they think it is. Let’s try not to put it in their face,” she said. 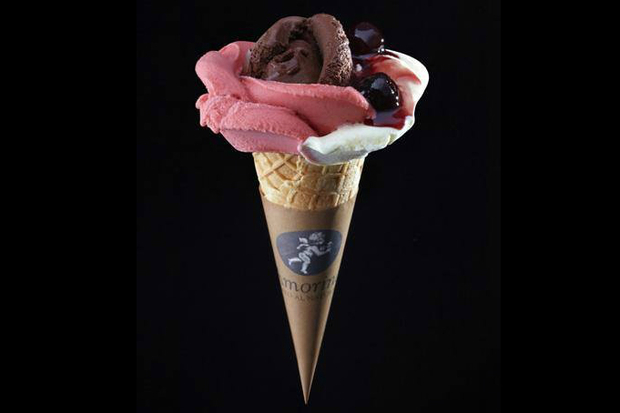 Amorino gelato is authentic and would be a better fit in Mariano Park, some Gold Coast residents say. [Amorino Gelato]

Meanwhile, Lisa Gasparian, the owner of Amorino, has been pulled somewhat awkwardly into the fray.

While a line of customers at Amorino is a typical occurrence, Gasparian said it’s gotten worse as customers unhappy with Black Dog's gelato have repeatedly come in to her shop to voice their discontent, even demanding a discount.

“They thought they could come to my store and wait in line, and by the time they got to the register, they wanted some sort of resident discount. And I was like, ’No such discount exists,’ " she said. “There were times I just gave it because people were so rude and I just couldn’t stand it."

Yet, the same customers have nothing but praise for her gelato and are pushing for her to open a cart in the park, something she said she could do easily.

“I already have a huge 10-by-10 walk-in freezer. It’s easy for me to store and have it be right. For me it would be a very quick execution, because it’s not that difficult,” said Gasparian, who also lives in the neighborhood.

“What I’ve told Phil is this is the wrong place to sort of half-ass it,” she said. “You’re dealing with the highest echelon of people who live in Chicago.”

Amorino's gelato is imported from Europe and is layered, flower-like, into cones. Fans say it's the most authentic gelato this side of the Atlantic.

“If you come to my store, you’re always going to have stracciatella, pistachio, all the traditional flavors,” said Gasparian.

Said Melisa Schwarz, a self-described Boston foodie and frequent visitor to Chicago, "After eating them both, Amorino is traditional gelato, Black Dog is not.”

But Black Dog followers have come to expect the non-traditional. Goat cheese cashew caramel is one of the shop’s signature flavors.

Even so, Oloroso said she has pulled back on the Mariano Park offerings.

“I don’t even put some of our more creative flavors out there,” she said. “We're putting flavors that are a little more classic. We’re listening to people.”

The people continue to talk amongst themselves. Steinreich on Sunday said they plan to convene another meeting.

"We want to make the Park great again that is all. It is our backyard we want it great," she said in an e-mail.

Tadros remains flummoxed but determined to stick out what he calls this "almost sitcom horror."

“At the end of the day, it’s gelato in this beautiful park. Appreciate it or move on," he said. 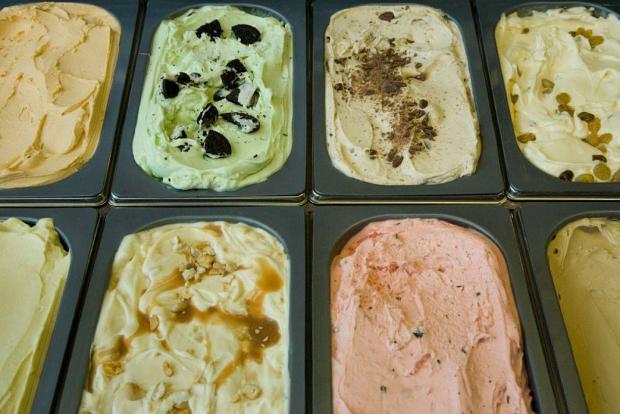 Carving Church Into 28 Apartments 'Too Big Of An Ask,' Wicker Group Says