Twitter Facebook Email More
Two women who were part of a group of teens that attacked a man in Logan Square can be seen chasing him down Milwaukee Avenue in surveillance footage.
View Full Caption
Screen shot

HUMBOLDT PARK — A woman who was sucker-punched while walking her dog on The 606's Bloomingdale Trail this week said she believes the attack and a Logan Square beating of a gay man are connected.

The victim of Tuesday night's punch on the trail said she recognized her attacker in a surveillance video of the Logan Square assault, which was published by DNAinfo Thursday.

"I thought with 99 percent accuracy that that girl was the girl that hit me," said 30-year-old Jean Godfrey. "... It's terrifying. At first when it happened to me I thought it would just be a one-off incident."

During both cases the attacker threatened to steal the victims' dogs, but did not try to rob them of any of their belongings.

The victim of the Logan Square assault, which occurred July 29 in the 2600 block of North Spaulding Avenue, said he believes the attack was a hate crime.

The attackers in that case, a group of six teenagers, yelled homophobic slurs at him while beating him, but did not attempt to steal any of his belongings except for his dog.

The victim of The 606 punch said her attacker looked exactly like a female seen chasing the Logan Square victim down Milwaukee Avenue in the surveillance video.

"It struck me instantly that she must be the same one," Godfrey said.

Godfrey said she was walking her dog alone on the trail just west of the entrance at Rockwell when a teenage girl approached her on a bike and punched her in the face while riding the bike.

"At that point I was just in shock," she said. "I couldn't understand what happened."

After getting punched Godfrey headed for the exit of the trail and was approached by a group of teens on bikes and realized one of those teens was the girl who punched her.

"She threatened me and said 'I'm going to hit you in the face again and I'm going to steal your dog,'" Godfrey said.

Godfrey said she ran for the exit while calling 911 and while she was running, a man who was part of the group was running alongside her taunting her saying the police would never get there in time.

She luckily ran into a Good Samaritan near the trail's entrance at Rockwell who waited with her until the police arrived.

As of late Thursday, police said the investigations into both cases were ongoing and there were no suspects in custody.

Both victims of the attacks say they hope the high-quality surveillance footage leads police to find the suspects.

Godfrey, who moved to an apartment in Humboldt Park about a month ago from Wicker Park, said she is shaken up and doesn't plan to go on the 606 trail at night anymore.

As for what may have motivated the attack, she said, "I think it was for fun; they were teenagers. It was a random act of violence."

Although Godfrey said her face is sore, she is thankful that it was only one punch.

"It's more just shaken my sense of security and confidence in my neighborhood," she said.

For residents, the incident on The 606 was a reminder that the trail is not always a safe spot considering there are only 12 points of entry or exit on the 2.7-mile-long trail.

"It sucks to say this, but it seems it's safer to walk the regular streets, dealing with traffic and other inconveniences than up on the trail after dark," said Yolanda Correa.

The 606, like all Park District parks, closes at 11 p.m. daily. The Chicago Police and Park District have conflicting viewpoints on whether the trail can stay open after 11 p.m. for commuters using the path as a thoroughfare. 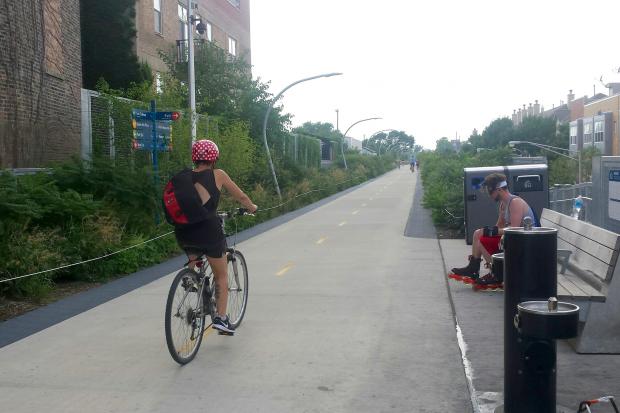 A cyclist and roller blader near the Rockwell Avenue exit along the Bloomingdale Trail. [DNAinfo/Alisa Hauser]