BEVERLY — The new playground at the Beverly Castle Academy sticks with the preschool's theme, in that it's also designed to look like a castle.

The $45,000 playground was installed last month at the school tucked beneath the Beverly Unitarian Church at 10244 S. Longwood Drive, said Kelly Sise, director of the school for children between ages 2½-6.

The finishing touches wrapped up last week, just in time for the all-day preschoolers and junior kindergarten students to return on Aug. 25. Other preschoolers start classes after Labor Day, Sise said Thursday. 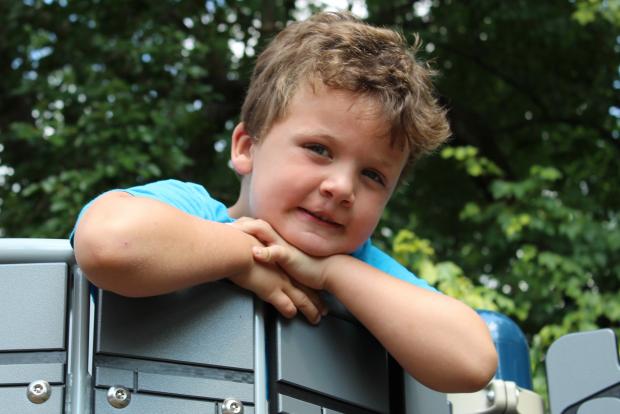 Graham Elliot's five-year-old son, Conrad, was among the first to try out the new playground Thursday at the Beverly Castle Academy. He graduated from the preschool last year. His brother, Jedediah, 4, will return in the fall. [DNAinfo/Howard A. Ludwig]

Some $37,000 was raised for the new playground at a fundraiser Feb. 26 at the Beverly Arts Center. Celebrity chef Graham Elliot of Morgan Park made heavy appetizers for the event and Beverly brewery Horse Thief Hollow provided craft beer, as did others.

"I feel very fortunate to be part of this community," Sise said. "Everyone just comes together and supports each other."

Graham and Allie Elliot's children — Conrad, 5, and Jedediah, 4 — were among the first to try out the new playground Thursday. Conrad graduated from the Castle last year, while Jed will return to enjoy the new slides and lookout area. 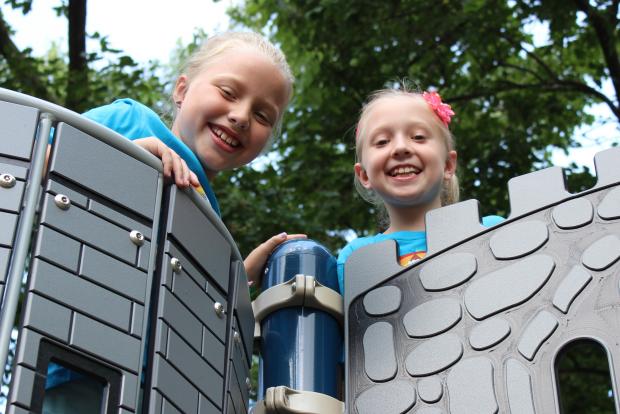 Eight-year-old cousins Anna Sise (left) and Maddie Sise said they liked the different slides at the new playground at the Beverly Castle Academy. The graduates of the school said the new structure replaces an old, wooden play set that was taken down years ago. [DNAinfo/Howard A. Ludwig]

Sise said she's also planning to add to the playground over time, incorporating several sensory areas. This could eventually include an outdoor art and music center as well as a story time nook.

"Children have so many different interests. Just because the are outside doesn't mean they need to be jumping and climbing," said Sise, whose school shares space with the highly-visible Irish castle in Beverly.

She credited the reformation of the school's parent-teacher group for raising the money for the playground and added that she's hoping to install a brick walkway too. The school will sell engraved bricks to help pay for the path.

Artist Chris Campagna of Pullman sends his four-year-old son, Tristan, to the Castle. He contributed a Chicago Blackhawks-inspired painting to the fundraiser. The proceeds from the sale of the painting helped to build the playground.

"Art is my thing. So if I can help people with my art, that's what I should be doing," Campagna said. 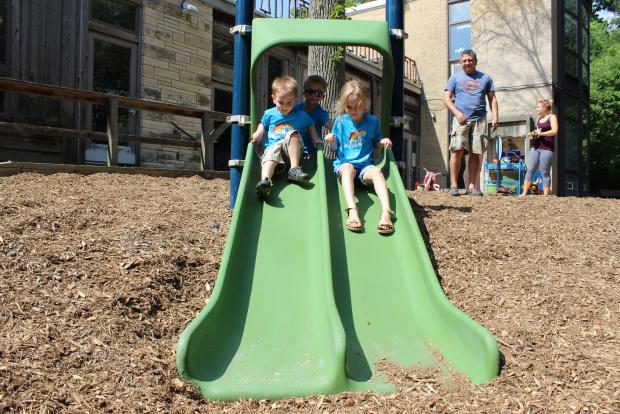 Craig McShane, 3, races his sister Molly, 5, down a new slide Thursday at the Beverly Castle Academy. The slides were installed along with a new playground last month. [DNAinfo/Howard A. Ludwig]