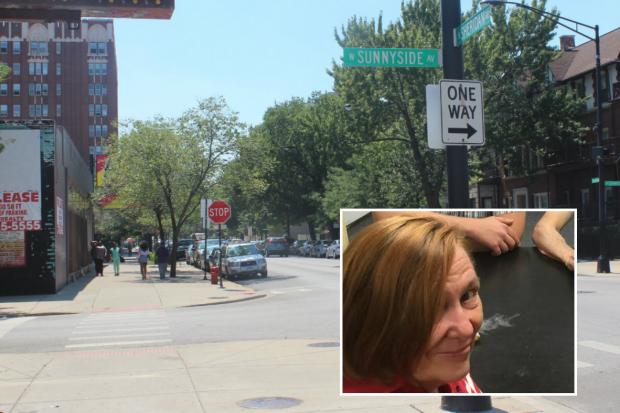 UPTOWN — A StreetWise vendor was killed and a 58-year-old man was wounded during a drive-by shooting in Uptown Wednesday, leaving friends in mourning and the block it occurred on in shock.

The 57-year-old woman slain has been identified as Penny Gearhart, a grandmother, according to the crime blog CWB Chicago and confirmed by StreetWise Thursday. Her identity has not been confirmed by the Medical Examiner's Office.

"It has been hard news to hear today," said Julie Youngquist, Executive Director of StreetWise. "We were all just shocked and devastated. She had great relationships with everyone who came through our doors."

Around 3:25 p.m. Wednesday, Gearhart and the 58-year-old man were walking in the 4500 block of North Sheridan Road when someone opened fire from a passing car, said Officer Michelle Tannehill, a Chicago Police spokeswoman.

The man was hit in his leg and taken to Illinois Masonic Medical Center in good condition, but Gearhart was hit in the torso and pronounced dead, Tannehill said.

Gearhart had worked for the magazine, which "raises awareness on the impact of poverty and homelessness," off-and-on since 2011 and was also a frequent contributor, said Youngquist.

"She was part time, but still very active in our community," she said adding Gearhart would often stop inside to ask for coats or shoes to donate when she found someone without the items. "She always had kind and encouraging words. She had a very big heart and constantly wanted to give back."

In StreetWise's "Personal Success Stories," Gearhart thanked StreetWise and her Higher Power for helping recover from drug addiction and a life of crime.

"It’s an up and down issue. I recovered from drugs and a lifestyle of an illegal background. It’s harder some days than others, but I continue to work for personal growth," she said in the article written in Jan. "Personal growth is my main focus: on me and my issues, becoming a proper member of society instead of a career criminal. It’s been 3 years, 3 months, and 16 days that I have been home from the state penitentiary, and I have never looked back."

Creative Director Dave Hamilton said his fondest memories of her revolved around her kind words.

"I would see her a couple days a week and she always had a compliment ready for my shoes. She would always tell me how much she loved my shoes," he said adding initially he shrugged off the shooting as violence as usual in Chicago.

"To find out today, it was someone we knew and appreciated was really hard to swallow," said Hamilton.

While police said the 58-year-old man was a documented gang member, witnesses and neighbors in the area said he is a quiet man, who only speaks a little English.

An employee at La Ciudad Mexican Cafe and Grill, at 4515 N. Sheridan Road, who refused to give his name said he lived in the same apartment building on Sheridan Road as the man, but wasn't surprised by him getting shot considering the area.

"I've had quite a few people I know get shot around here," he said adding he didn't personally know him, but would chat with him in passing.

"They need to crack down on the gang activity around here" like officers did on Wilson Avenue at the beginning of July, he said.

Fifteen-year-old Andy Giler, who works at a pawn shop in the same strip mall, said he was considering walking over to one of the shops north of the store for a drink about two minutes before the shooting occurred.

"I heard two shots at first then a pause and two more shots. At first, I thought it was fireworks," he said adding he knew it was gun shots after seeing young men pace back-and-forth from the big glass windows at the shop. "This is the first time I've actually heard something like this happen."

Amal Imseih, who's owned Chicago Dollar, 4517 N. Sheridan Road, for about 24 years, said the man was a frequent customer at the store.

"He's a quiet guy and doesn't speak much English," she said.

She was by the lotto machine near the front window of the store when she heard about 6 shots.

"It was loud. I got scared. I was shaking," said Imseih adding she took cover behind the counter. "It's terrible and sad at the same time. I feel sad because I know him."

After taking cover, she called police, but had difficulty relaying her message because of the anxiety, she said.

"Please, I need an ambulance. We have to take care of the man. He's in the street and can't move," she remembered telling police, who arrived about a minute later.

Even though, it's not the first violent issue they've dealt with it in the area, it still gives her anxiety and it only seems to be getting worse.

"Too many shootings happen. I didn't feel it before, but these days it's terrible. And I have to stay with my husband because we can't afford another worker... The shootings happen all the time. Everyday I come in I tell my kids to pray for me because I don't know if I'm going to make it home. Everyday I pray 'please God, protect us.' It's not safe anymore," she said.

"I can't sleep at night. I imagine the guy bleeding from the window and I can't help because I'm scared."