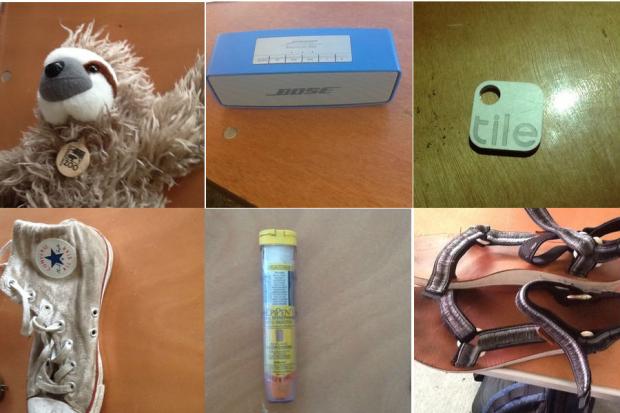 A stuffed sloth, a portable speaker, an Epi-Pen, a Tile tag used for finding lost items, and lots and lots of shoes were among the items left behind at Lollapalooza.​ [Crowdfind]

THE LOOP — Lollapalooza is finally over, but some unlucky festivalgoers left behind more than just good memories at Grant Park.

Every year, hundreds of items part with their owners and arrive at Lollapalooza's lost and found booth. The festival has teamed up with Chicago-based lost and found service Crowdfind to catalog every lost possession recovered on festival grounds.

Attendees can search Crowdfind's Lollapalooza page to see if their lost valuables have been collected by a good Samaritan. To claim the items, the owner must provide pass codes, engravings or anything unique identifiers of the item to verify ownership.

As of now, more than 800 unclaimed items are on the page.

Sure, at a four-day music festival with hundreds of thousands of people in attendance, it's easy to misplace an occasional iPhone or a wallet. But what about portable speakers, a Fitbit or even an EpiPen?

Here are a few strange items we found at Lolla's lost and found.

How does one go about losing an entire skirt? Did it fall off while raging to Radiohead? Did she have something she could change into (we hope)?

So many unanswered questions.

Here's a thing about music festivals — they play music. A lot of it. REALLY loud. Why anyone would want to bring a portable speaker to Lollapalooza is quite baffling. An impromptu dance party in between the stages, perhaps?

What possible use could a stuffed animal have at a music festival (besides doubling as a pillow for a power nap on the muddy ground)? This poor sloth probably misses the comfort of a nice clean bed right about now.

A lot of footwear

Flip flops, sandals, sneakers, you name it — it looks like a few attendees had to leave Grant Park barefoot.

With all the jumping, moshing and generally moving around the entire day, going to music festivals is definitely a calorie burner. But wearing a Fitbit to Lollapalooza? That's a whole other level of dedication to keeping track of your fitness.

This is perhaps the most unfortunate item in lost and found. For the unfamiliar, Tile is a Bluetooth tracking device that attaches to a key holder or a phone to easily locate them.

Well, you can't really find anything with a Tile if the device is found on its own. Here's to hoping the owner of the lost Tile held onto his/her phone or keychain.

This surely is a proof of some music fans' the immense dedication to go see their favorite bands live. The rainy, muddy, crowded and generally unhygienic festival might not be the best place to hang for a person who needs a shot of epinephrine to treat anaphylaxis, or severe allergic reaction. But hey, Radiohead was playing, so this kind of commitment is more than understandable.