THE LOOP — Gov. Bruce Rauner apologized to teachers Friday and said that he made a mistake in a recently released email from five years ago in which he asserted that half of Chicago Public Schools teachers were "virtually illiterate" and half of its principals were "incompetent."

Speaking at the Thompson Center at a news conference called on another education matter, Rauner said, "I apologize for the statement I made in 2011 in that email," describing it as "inaccurate and intemperate."

The news conference was interrupted by a series of Chicago Teachers Union members reading statements and education texts, with one bringing up a 2008 incident where Rauner changed his voting residence from Winnetka, where his wife continued to live, to a Downtown condo. That same year, his daughter applied to CPS' highly selective Walter Payton College Prep at 1034 N. Wells St.

His daughter initially was rejected, but Rauner called then-CPS chief Arne Duncan, and his child was admitted. He reportedly made a $250,000 donation to Payton, but Rauner has said that the donation was not linked to his daughter's admission and that she was accepted "fair and square."

Jackson Potter, a teachers union member who led the demonstration, called Rauner "Trump-like" as he was ushered out by state troopers.

"It's important that we educate you about what we really do every day, because obviously you don't really know," Potter said. "You've harmed education, destroyed this great state," he added. "Your remarks are inflammatory and Trump-like. You need to stop this attack on public education."

"He clearly doesn't know what the word 'illiterate' means," said Arathi Jayaram, a teacher at Schubert Elementary, after the protest. "I don't accept his apology. He needs to apologize to our parents and students." 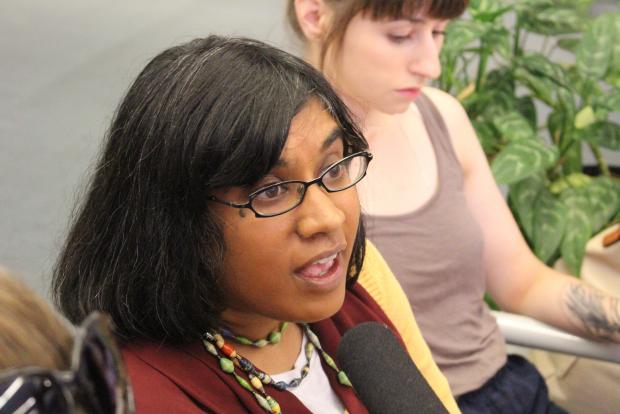 Dominica Ziobro, a teacher at West Ridge Elementary who joined in the demonstration, called Rauner's email remarks "hurtful to teachers, principals and administrators."

Many waved books at Rauner as they were led out of the news conference.

He pledged more money for education while reasserting his support for charter schools, which are privately run but publicly funded. Yet he gave no details or timeline, saying, "Today is not the day to go into all the plans for the future."

The emails released Thursday produced an instant firestorm, forcing the governor to immediately backpedal and put out a statement saying that he "regrets" the emails, that he "apologizes to CPS educators for making an unfair, untrue comment" and that it "was sent out of frustration at the pace of change in our public school system."

The emails were released Thursday by Mayor Rahm Emanuel's Office in response to a Freedom of Information Act request by the Tribune. A longtime proponent of charter schools, Rauner was acting as an adviser on education issues for the newly elected mayor.

@CTULocal1 member do read-in to demonstrate our literacy and outrage at Rauner's attacks on educators pic.twitter.com/UZMSASzw9Z

Rauner had scheduled the Friday news conference at the Thompson Center Downtown to sign legislation on transparency in school testing, while attempting to "honor training for teachers" in the form of added flexibility in them qualifying for their licenses.

"I am a strong advocate for teachers — always have been, always will be," Rauner said.

A news release touting the legislation attributed to Rauner the statement: "I've long said that teachers are our state's most important resource."