By Kelly Bauer |&nbspJuly 15, 2016 5:04am | Updated on July 15, 2016 8:01am
@bauerjournalism
Twitter Facebook Email More
Activist Ja'Mal Green speaks to a crowd of activists outside the Taste of Chicago on Saturday.
View Full Caption
DNAinfo/Kelly Bauer

DOWNTOWN — Activist Ja'Mal Green is facing felony charges for allegedly hitting and attempting to disarm an officer at a protest, but witnesses say he didn't do those things — and they think video and photos back them up.

Green, an activist, helped organize and lead an anti-police-brutality protest that saw hundreds of people march through the Taste of Chicago and then along Michigan Avenue on July 9. He was arrested during the protest and charged with aggravated battery of an officer, aggravated battery in a public place, attempting to disarm an officer and resisting or obstructing an officer.

Supporters have set up a petition asking prosecutors to drop the charges against Green, stating that officials are using the charges to "silence the movement." More than 400 people have signed the petition online.

Police declined to comment, deferring to the State's Attorney's Office.

Sally Daly, a spokeswoman for the State's Attorney's Office, said in an email: "We put all of the facts and evidence regarding these charges on the record in the bond hearing and we stick by those facts, which included a picture of Green taken by a Chicago Tribune photographer which shows contact between Green and a police official," 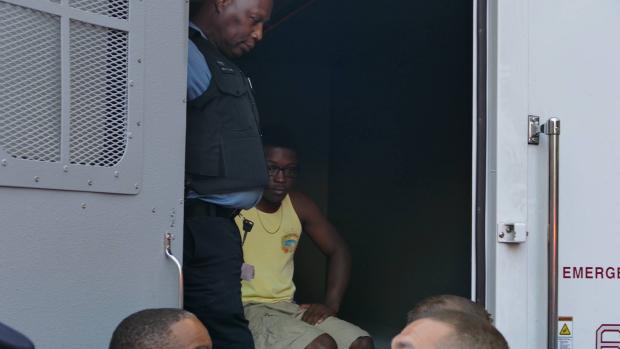 Several of the charges against Green stem from an incident that happened at the exit of the Taste of Chicago, when Green was gathering activists before leading them along Michigan Avenue.

Green was standing on a barricade at the exit of the Taste when an officer told him to get down, prosecutors said earlier this week. The officer pulled Green down. Green told the officer he would "beat his a--," prosecutors said, and began swinging his arms, hitting an officer.

DNAinfo Chicago obtained video of the incident from Charles Fogarty, a photographer who was visiting Chicago and went to the protest to take photos and video:

The video appears to have been taken around 6 p.m.

Prosecutors said a Tribune photograph shows Green hitting Devereaux, but an activist who witnessed the incident said the photo shows Green moving after "falling down because he was yanked down." The activist asked to remain anonymous because he is concerned about police retaliation.

“I didn’t see any physical things,” the activist said. “Maybe there was like some minor, incidental contact, but certainly no one was trying to get physical or aggressive, Ja’Mal or Devereaux or any of the other officers.”

The activist said the protest had been "even-keel" and the protesters "very compliant," though things became more tense after Green was pulled down.

Erickson, Green's attorney, said Tribune photographs do not show Green hitting an officer, despite what prosecutors said on Monday.

“Again, those photos do not depict what State offered in court,” Erickson said after looking at a video showing several Tribune photos of the incident. “The photos show the officer reaching toward Ja’Mal while he’s up there. The officer reached up and pulled Ja’Mal off the fence.

“The photos do not show Ja’Mal punching the officer in the shoulder with his right hand as claimed by the prosecutor and police.”

After Green was pulled from the barricade, officers and activists swarmed around him. "Let him go! Let him go!" some members of the protest chanted.

Police did let Green go, and he led the protest away from the Taste and down Michigan Avenue. Erickson questioned why police would have let Green do that if he had actually hit an officer.

“They would’ve arrested him on the spot had he hit a police officer,” Erickson said. “It didn’t happen. ... They came up with it later because they don’t like what Ja’Mal has to say.”

The State's Attorney's Office declined to comment on why Green was able to keep marching. Anthony Guglielmi, a Chicago Police spokesman, said Green was arrested "after repeated physical contact."

Video from DNAinfo Chicago shows Green leading activists away from the Taste after the incident at the barricade. He is next to an officer:

Green and other activists, who began to march down Michigan Avenue, repeatedly asked police to suspend or remove the officer who had pulled Green down.

After the incident at the Taste, police repeatedly tried to "grab" Green when no one was paying attention, said Fogarty, the photographer who was taking photos and video of the protest.

Prosecutors said police let Green go but arrested him about 7:20 p.m. near Water Tower Place when he got into an alleged second altercation with officers who were arresting another person at the protest.

Green spit at an officer and grabbed the officer's duty belt, putting his hand less than 1 inch from the officer's gun, prosecutors said.

Witnesses and Erickson also dismissed these claims when talking to DNAinfo Chicago.

At one point, witnesses said, a woman was detained by police. Green spoke to officers and tried to negotiate with them so she could be released, they said. He had done this at least one other time during the protest.

Fogarty said a second video he took shows Green talking to police at about 7:13 p.m., shortly before police said he was arrested:

Green went into a police van and spoke to police, Fogarty said. He said Green was "making a deal with police in a very casual way, in a very diplomatic way."

"I don't know where that idea that he grabbed somebody's gun came from because it was very adult and very diplomatic," Fogarty said.

Another witness, an activist who was arrested, said in a statement sent to DNAinfo Chicago that he was in the police van when Green came in. There were officers behind Green and they told him they wanted to speak to him, but he said once the van doors were closed several officers grabbed Green and shoved him.

Erickson said there are witnesses who contradict what police and prosecutors said about the alleged altercations.

“They also charged him with attempting to disarm a police officer. However ... there was no evidence that he ever grabbed the weapon, touched the weapon in any way,” Erickson said. “So, it’s a far stretch to come up with an attempt to disarm … .”

RELATED: Activist Ja'Mal Green Out On Bond, 'Happy To Be With Family'

The charges are "keeping with Chicago's traditions of cover up and code of silence and oppression," Erickson said. He was also critical of the $350,000 bail Green was given and has called it "punitive."

“I think these charges, in culmination with the excessive bond and the special conditions of bond, including the curfew and the gag order, were just all an attempt to stifle his right to free speech,” Erickson said.

Green, who has been bailed out, is "not pleased" that he cannot use social media or express himself, Erickson said.

“He’s in good spirits and he’s looking forward to his day in court,” Erickson said. “He welcomes the opportunity to fight these charges.”