On Thursday, there will be a way to satisfy those desires, when Miko's Italian Ice plans to offer a limited-edition Serviceberry Ice made with berries that were picked from serviceberry trees located on the trail.

All profits from sales of the summer treat will benefit the Friends of the Bloomingdale Trail, a nonprofit group that helps to organize and advocate for communities along the 2.7-mile elevated path.

The serviceberries used in the ice cups were picked by a "berry picking brigade" who sourced the berries on the Bloomingdale Trail and throughout Chicago.

Miko's Serviceberry Ice will be offered from noon to 10 p.m. Thursday while supplies last, and possibly Friday, if there is any left over.

Also known by the name Juneberry, the serviceberry tastes like a mild blueberry and is slightly nutty and sweet, according to Benjamin Helphand, president of the Friends of the Bloomingdale Trail's Board of Directors.

The berries are ripe only for a few short weeks in early summer.

"Serviceberries grow all over the city," Helphand said. "The event isn't about literally eating from the trail, though there is some of that. It's foraging inspired by the Bloomingdale Trail."

For more details, visit the "Berries for the Bloomingdale Trail" event page. 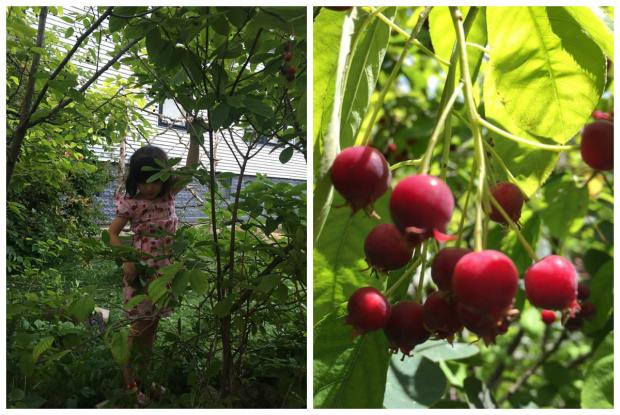 Selah Helphand, 4, picks serviceberries that will be used in the Serviceberry Ice cups. [Benjamin Helphand]