That was what one Gold Coast resident said at a community meeting last summer about a new concessionaire moving into Mariano Park at State and Rush streets to replace the outgoing Whispers Cafe.

It appears the people do care about their gelato, however.

For weeks now, since that concessionaire, Bow Truss Coffee Roasters, opened its kiosk in the Gold Coast park, owner Phil Tadros said he’s been inundated with livid text messages from neighbors — “like five to seven a day,” he said —  demanding gelato and accusing him of “ruining summer."

“I was told to use this number for complaints! Please get the park some gelato this is not rocket science!!!!!!!” read one.

“Does the White House have to help you store to get a case of gelato!” said another.

The texting paid off. On Thursday afternoon — at 88 degrees, the right kind of afternoon for a frozen treat — employees scooped out free samples of freshly churned Black Dog gelato to passersby from behind an unmarked, flamingo-pink freezer case.

But Black Dog owner Jessica Oloroso cautioned that it was a soft opening and couldn’t guarantee there would be gelato Friday or on the weekend because of difficulties with the freezer maintaining an ideal temperature.

“It’s running but as the product sits out there longer, it’s just getting warmer and warmer,” she said. "Right now we're just trying to figure it out."

Tadros said the plan all along was to offer gelato as Whispers Cafe had, and not just any gelato, but local favorite Black Dog, known for its unique flavors like goat cheese cashew caramel.

But the setup wasn't ready when Bow Truss opened in June, which coincided with the start to Black Dog’s high season.

“When we rehabbed, I didn’t want to just plop a big giant case outside the building,” Tadros said.

Oloroso also has been in the midst of expansion, with a new location at Revival Food Hall, opening next month in the Loop.

A temporary fix, they thought, would be to sell pre-packed gelato cups out of the coffee hut, but that seemed only to upset the area's gelato eaters even more.

Tadros was under more fire himself earlier this week after Crain's Chicago Business published an article that examined the growth of his businesses and raised questions about his financial operations.

In an e-mail Thursday, Tadros called it a "skewed attack."

"We probably gave them more traffic than they have had in a long time, but that's no excuse for unfair tabloid level gossip 'take down' from Crain's. Smart people see right through it," he wrote. 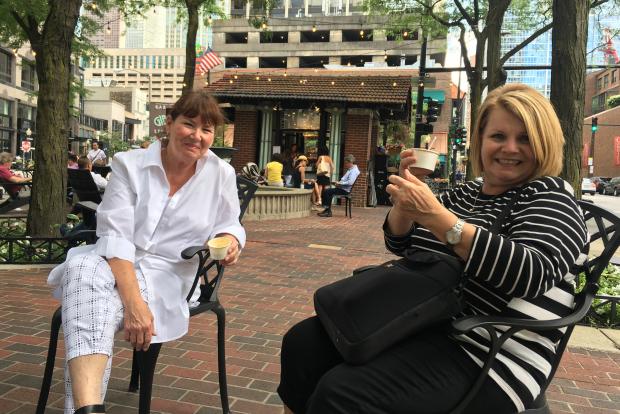 Dorinda Allhands (left) and Max Friday, who work at a salon across the street, enjoy Black Dog gelato for the first time. [DNAinfo/Janet Rausa Fuller]

If there were any haters at the park on Thursday, they weren’t making themselves known.

Hair stylist Max Friday, who works across the street and lives nearby, came for gelato with co-worker Dorinda Allhands after lunch. They sat with their raspberry-balsamic and salted peanut gelato, respectively, taking in the warm breeze in a shady spot.

Friday said she asked if there would be ice cream in the park, the first time she bought coffee from Bow Truss. ("Best coffee I've ever had. Better than Intelligentsia," she added). When she was told there would be — eventually — that was fine with her.

“It’s new. Give ‘em a chance… Get a life,” she said of the angry text messagers.

Wayne Hobin, 61, a doorman at a building around the corner, sat on a bench smoking a cigar, as he does just about every evening before his shift. He wasn’t a big gelato eater when Whispers Cafe was around, though he did always admire their case from afar, packed high with gelato.

More concerning for Hobin is that the picturesque fountain anchoring the small park still has not been turned on.

"It usually is by now," he said. By Friday morning, it was.