Activist Ja'Mal Green's Not Out On Bail Yet, But Supporters 'Optimistic'

Twitter Facebook Email More
Green's $350,000 bail is "the kind of bond you would set for a violent crime, not for a protest," his attorney said.
View Full Caption
DNAinfo/Alex Nitkin / Chicago Police Department

COOK COUNTY CRIMINAL COURTHOUSE — Supporters of activist Ja'Mal Green are racing against the clock Tuesday night to post bail for the young man they say is being railroaded by police and the justice system.

Judge Peggy Chiampas set Green's bail at $350,000, which his attorney, Jon Erickson, called "outrageous" and "punitive." In order to free him, his family would have to come up with 10 percent of that total, or $35,000.

Green's supporters also railed against the bond and vowed to help spring the activist by Tuesday night. As of 6 p.m., a group helping to raise the $35,000 needed said they were still short $3,000.

The latest the county will take a bond payment is 8:30 p.m. daily, according to the Cook County Sheriff's office.

Speaking in the late afternoon, Erickson said he still expects Green to post bond Tuesday but said if that doesn't happen, he is prepared to make an "emergency appeal" to have the bond lowered.

The appeal would be filed with the appellate courts who could hear Green's case as early as Wednesday, Erickson said. He said if the court decides Green's bond was too high, it would likely instruct the criminal court to reconsider it.

"This bond is excessive and inappropriate," Erickson said. "The courts should take a second look at it."

Meanwhile, about a half-dozen supporters remained outside the County Jail on Tuesday night advocating for Green's release.

Green is accused of attempting to punch and disarm a police officer he had previous run-ins with at the Saturday protest. His encounters with police began once the officer, Area Central Chief of Patrol George Devereaux, allegedly pulled Green off a barricade at the Taste as Green attempted to shout instructions to protesters.

Jared Steverson said he marched alongside Green on Saturday, and said police's version of events are trumped up in an effort to intimidate activists. He said Green is peaceful and knows better than to try and dissarm an officer.

"They say he hit that officer at the Taste, tried to take his gun," Steverson said. ""If he did, why did they let him continue to march to Michigan Avenue? Why would they be that lenient?" 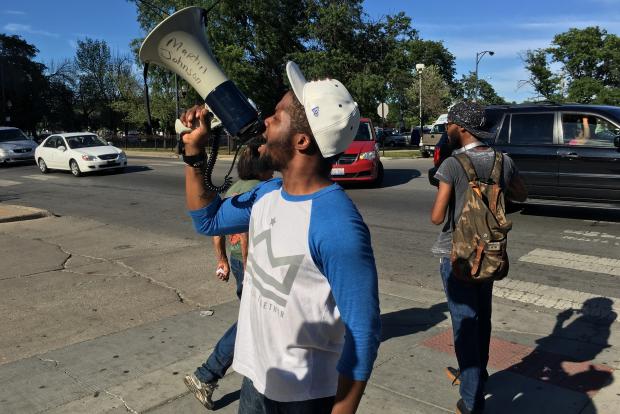 Steverson echoed the sentiments of other protesters, saying Green was tricked by police and arrested after he attempted to persuade officers to release a protester.

Steverson said Green was handcuffed and was about to fall forward, and so he tried to brace Green's fall when officers also put him into handcuffs.

"They grabbed me, punched me, choked me, kneed me," he said.

"I'm taking it to court," Steverson said. "They're going to have to prove I touched an officer. I didn't."

The Chicago Community Bond Fund has set up a page to draw donations, and as of noon Tuesday they'd raised about $20,000 to spring Green and Louie Keegan, who was also arrested at the protest Saturday, according to fund co-founder Sharlyn Grace.

Half that sum has already been used to bail out Keegan, and Green's family is raising money independently of the bond fund, Grace said.

"The family has already raised the majority of what is needed," Grace said. "We'll be supporting with a percentage and optimistic bond can be posted today."

On Tuesday morning, the group Chicago Rising tweeted that they were about $7,000 away from raising enough money to free Green.

On Monday, Erickson said he was confident video would contradict what prosecutors claim transpired between Green and police. 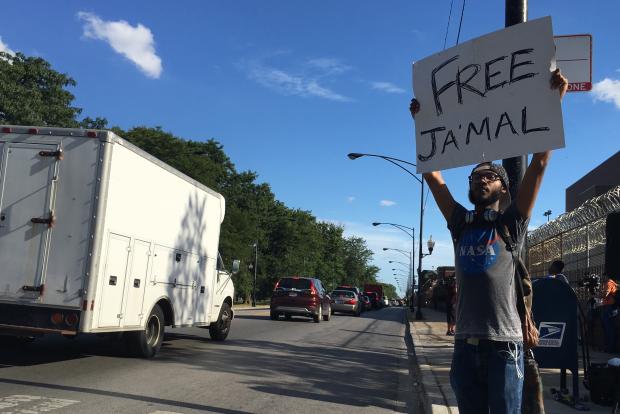