Protesters Shut Down Both Directions Of Michigan Avenue Downtown

MILLENNIUM PARK — After more than 200 Chicago teens sat silently at the Pavilion in Millennium Park on Monday afternoon, quietly protesting the shootings of black men by police, many of them helped shut down Michigan Avenue.

Tweets on Monday night showed both directions of Michigan Avenue shut down by protesters.

Both sides of Michigan Ave shut down #blacklivesmatter Chicago pic.twitter.com/8vringEoX3
Via @aaroncynic

Four teen girls organized the sit-in, which drew people from all backgrounds throughout the city and surrounding areas. They sat to take a stand against the shootings that killed Alton Sterling in Baton Rouge, Louisiana, and Phillando Castille in suburban Minneapolis.

Maxine Wint, 16, of Kenwood said the deaths affected all of them.

“We’ve all been, if not personally affected, then affected in some way," she said. "Just seeing this continue to happen, from Trayvon Martin to now, it’s just like nothing has changed. It’s still happening and we really want something to change. It’s just too long overdue that we’re still out here trying to protest for equal rights or trying to show people that black lives matter."

She said that supporting the Black Lives Matter movement doesn't mean they are against police.

"We’re not anti-police, we’re anti-racism, and we just want people to know that we stand here for peacefulness and come together as one," Maxine said.

Friends Maia Robinson and Asia Joy commuted from Evanston. The teens said they're tired of their generation hiding behind computer and phone screens to complain about the issues. 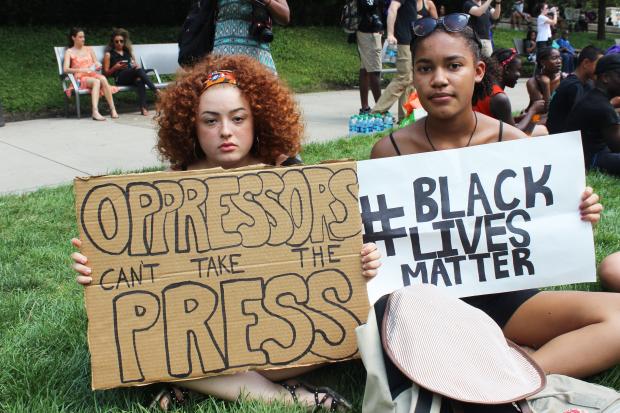 "It’s much easier to just type something than to go out and do it," 16-year-old Maia said. "Within the black community we just have so much anger right now and we’re very mad and upset. I think going out to events like these can turn our anger into passion and actually doing something that could have a real effect in our community."

"I feel like there’s a lot of stuff going on on Facebook, like there aren't a lot of people doing stuff physically so I thought it would be a good thing to actually not just talk the talk, but walk the walk."

Hannah Anthony and 6-year-old daughter Katherine came from Albany Park. Anthony said that although she's white, her daughter is bi-racial and people will see her as black.

"It’s important for me that she has a voice and that I can help represent her and support her, her family, cousins and everyone else," Anthony said.

She said her role in the Black Lives Matter movement is recognizing her privilege as a white woman.

"I’m never stopped by police and I know not everybody can say that. As a white woman I want to make sure everyone is treated that same way."

The protesters, which consisted of different groups such as the Civilian Police Accountability Council, Black Lives Matter and the teens from the earlier sit-in, later marched toward Wacker and State.