CHICAGO — A lawyer for a young activist who led a protest against police brutality at the Taste of Chicago this weekend said the steep bond a Cook County judge set is an "outrageous" attempt to send a message that disobeying police will not be tolerated.

Ja'Mal Green, 20, participated in a "die-in" at Taste of Chicago on Saturday, during which he was involved in two separate tussles with officers assigned to the protest, police and witnesses said. Green was subsequently charged with aggravated battery of an officer, aggravated battery in a public place, attempting to disarm an officer, and resisting or obstructing an officer.

Green appeared in bond court Monday wearing the same yellow tank top he donned Saturday as he led nearly 200 protesters from the Taste of Chicago to the Magnificent Mile.

Prosecutors allege that during that walk, Green spit on an officer, refused an order to get down from a fence and threw a punch at an officer. At one point, authorities said, Green grabbed an officer's duty belt, near his gun.

At least 20 people supporting Green gathered in and outside the Leighton Criminal Courthouse on Monday, arguing the police version of events is untrue, and that they had video to prove it. Green's defense attorney also claimed video showed an alternate story, but when Judge Peggy Chiampas asked to see it, he said he didn't have it on him. Chiampas set Green's bail at $350,000, saying Green was "not peaceful."

That decision prompted outrage from Green's family in the courtroom, and his mother and sister were among three protestors detained by Cook County sheriff's deputies after someone shouted, "Black lives don't matter. You're wrong."

Judge Chiampas had asked protestors to be quiet as they left court Monday, insisting she "would not tolerate any kind of disrespect or other public outcry." The judge ultimately decided not to hold any protestors in contempt of court — but instead scolded all three women on courtroom etiquette.

"I can't control what happens out there on the streets, and God, I wish I could," the judge said. "But this is a court of law. And with this room, I will have respect."

Green's mother and sister were allowed to go, while a third protestor — who was revealed to have outstanding warrants in different counties — will held in Cook County custody until she can be transferred to the appropriate courthouses.

"It's outrageous," attorney Jon Erickson said. "That is the kind of bond you would set for a violent crime, not for a protest. They're trying to send a message that disobeying police will not be tolerated."

Erickson argued that Green is neither a flight risk nor a danger to the community: "I have respect for Judge Chiampas, but I think she got this one wrong. ... Tensions and emotions are running high, and that was reflected in that bond."

According to prosecutors, Green led a protest without incident at Taste of Chicago from 2 to 6 p.m. Saturday. At roughly 6 p.m., Green hopped on a nearby barricade to shout instructions to roughly 150-200 protestors, whom he would lead on a march toward Michigan Avenue.

It was then that a Chicago Police officer repeatedly told Green to get off the barricade, Assistant State's Attorney Erin Antonietti said during a bond hearing Monday. An officer eventually pulled Green down, and Green argued with the man, threatening to "beat his a--," Antonietti said.

Prosecutors allege Green began swinging his arms and eventually hit the officer in the left shoulder — an attack that was clearly captured in a Tribune photo, Antonietti said. Green's supporters have argued that Green was touching, not hitting, the officer.

He was arrested near Water Tower Place about 7:20 p.m. Saturday after he allegedly got into a second altercation with Chicago Police officers who were arresting a different protestor for "failure to exercise due care," court records show.

It was there Green spit at an officer and grabbed his duty belt, less than an inch from his gun, Antonietti said. A second officer detained Green, who reportedly said, "You're gonna get it. I'm gonna have your badge. You'll know next week."

Antonietti in court Monday argued that Green's social-media presence illustrated a clear "anti-police platform." She brought up a Facebook post by Green in which he discussed the murder of five police officers in Dallas.

According to prosecutors, Green posted this on his FB page following Dallas shooting https://t.co/eKiJoqVoP2 pic.twitter.com/4EjQJ24FjB

Erickson interupted Antonietti — arguing that the post wasn't relevant to a bond hearing and was clearly protected under Green's First Amendment rights. Chiampas said the post "concerned" her, but noted she wouldn't factor Green's Facebook account into her bond decision. In a subsequent post, Green clarified his position:

According to witnesses, Area Central Chief of Patrol George Devereaux was the person who told Green to get down and later pulled Green off a barricade. Activists and officers swarmed the men, with activists saying Devereaux could have injured Green.

"Let him go! Let him go!" they chanted as police tried to move them back from Green and the officer.

Afterward, as activists marched along Michigan Avenue, they repeatedly asked police to suspend or fire the officer who had pulled Green off the barricade. Green also told police they should remove the officer. 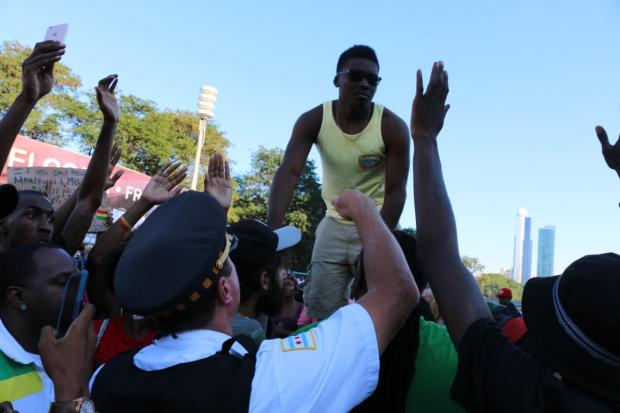 Green stood upon a barricade to talk to the crowd, but Area Central Chief of Patrol George Devereaux told him to get down. [DNAinfo/Kelly Bauer]

Green and the officer had argued several times during the protest. Police refused to let the activists bring signs or megaphones into the Taste, citing the festival's rules, and activists objected to the officer standing in the way when they tried to link arms.

At one point, a Tribune photographer captured Green reaching toward Devereaux. Prosecutors showed the photo to Chiampas on Monday, arguing that Green punched the officer.

Activist Martin Johnson, who took part in the protest, said Green was trying to "negotiate" with police to free another activist when he was arrested near the Water Tower Place. At that moment, Johnson said, officers grabbed him.

"They tricked him," Johnson said. "They had it out for him the whole time."

6-7 protesters here at Cook County Court, where @JaymalGreen's bond is about to be set pic.twitter.com/xc4x46lM0P

Green believes wholeheartedly in peaceful protest, Johnson said, and it isn't plausible that he assaulted an officer, much less tried to disarm him.

"He was the one who called for non-violence in the first place," Johnson said, adding that the charges were an attempt to "make an example out of him."

New Beginnings Church Pastor Corey Brooks, who identified as a "family friend" and a "mentor" to Green, said he visited him in jail Sunday and prayed with him.

The activist seemed "broken in spirit" and "very frustrated and stressed," Brooks said.

Still, Brooks said he was "more than confident" that Green's friends, family and supporters would come up with the money to spring him from jail Monday.

"Ja'Mal has been so vocal in helping the cause of black youth all this time," Brooks said. "I'd hope that all those individuals involved in the marches will come together when he needs them."

Green asked people to send letters of support before his bond hearing Monday. Green was active in the fight to get Cook County State's Attorney Anita Alvarez out of office, and has been an outspoken leader among young, black Chicago activists.

In November of last year, well-known activist Malcolm London faced similar charges following a protest over the shooting death of Laquan McDonald. Charges against him were dropped after a massive outcry from the activist community and local politicians.

Ayana Clark, Green's fiancee, told DNAinfo that supporters had started a GoFundMe account to raise the bond money, but it had been taken down.

Green's mother, who did not give her name, told reporters that her son was penalized too harshly.

The judge "did this so he can't take care of his family. She doesn't want him to work and he could lose his job," Green's mother said. "I thought the judge could've taken into consideration that he goes to school and takes care of his family, along with fighting for his community. He does so many things for the community and she didn't see it that way."

More scenes from the protest:

An anti-police brutality protest headed to the Taste of Chicago Saturday. [DNAinfo/Kelly Bauer]

An anti-police brutality protest headed to the Taste of Chicago Saturday. [DNAinfo/Kelly Bauer]