Was Pride At Montrose Shut Down Over A Fence Or Racism? Angry Activists Ask 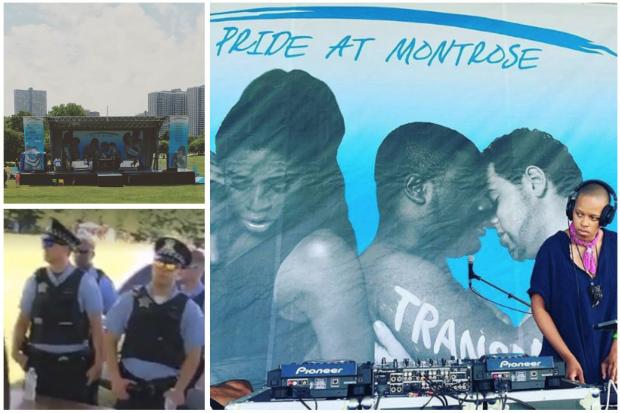 UPTOWN — Chicago Police effectively canceled Pride at Montrose on Sunday, forcing organizers to turn off music and shut down stage performances due to a barricade they said was too short — but organizers and participants believe the shutdown was racially motivated.

Activists expressed outrage Sunday night, dismayed that what could have been the "best" Pride at Montrose in two decades of the event would not be realized.

"We were peaceful, we were beautiful. But it didn't matter," organizer Erik Glenn wrote on the Chicago Black Gay Men's Caucus Facebook page. "The CPD knew they wanted to shut us down before the event even started. Black people everywhere know we are judged as violent before we even begin."

Ariel Cheung on the shutdown of Montrose Pride.

Pride at Montrose, set to begin in the afternoon toward the end of the 47th annual Chicago Pride Parade, was shut down soon after it started, said Glenn, executive director of the caucus.

Pride at Montrose is considered the kickoff to Black Pride, which traditionally takes place the weekend after the Pride Parade, activists said. The tradition began after those who gathered at "The Rocks" in Belmont Harbor were pushed away from the boating dock.

"What you've got to realize is Montrose is like our homecoming," said DeoVonte Means, 35. "For people who might not come out all the time, it's a reunion. So for this event to be canceled like that, yeah, that really hurt us."

For the first year, the nonprofit caucus partnered with the AIDS Foundation of Chicago to strengthen the health village offered as part of the formerly informal event. The free party had HIV testing and meningitis vaccinations for a population disproportionately affected by the diseases, Glenn said.

"What this does is prevent an opportunity for better public health," Glenn said. "Police are charged with keeping communities safe, and I know that's more about law enforcement than public health, but it's a sad day when those two things come into conflict unnecessarily."

The permitted event started off on shaky footing, as police officers stationed themselves in the parking lot of Montrose Harbor, where organizers usually park equipment vans to set up for the day, Glenn said.

Officers left as setup began, returning around 1 p.m. to order the music shut off. Police told organizers the barricades placed around the music stage needed to be 6 feet tall, Glenn said.

Theirs were about 4 feet tall — the same as those used to control Pride Parade crowds.

Taller barricades "would create an incredibly unsafe environment — patrons would go into what would effectively be a cage," Glenn said. "It's unfathomable and unprecendented."

And without music to attract a crowd, the event was effectively over.

On Sunday evening, a Chicago Police spokeswoman said she hadn't received notification of police shutting down the event. Police did not immediately release information related to the Pride Parade, such as arrests, cars towed or police calls for service, which is typical for large events that draw in manpower from other districts. 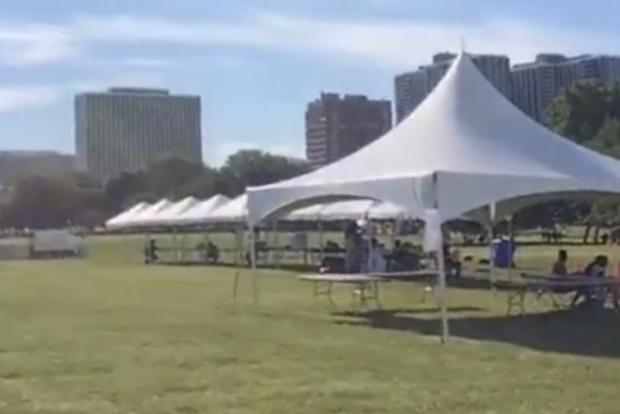 He also expressed frustration that 14 police officers lingered after the event cleared, eating the food organizers paid for and using port-a-potties they'd rented. Without a crowd to manage, the officers stood idly in the shaded tent.

Participants said it was hard to ignore what they considered to be police mistreatment of an event geared toward gay people of color.

With a huge police presence at the Pride Parade, some couldn't help but compare the encouraging environment at the increasingly mainstream event to the closure of Pride at Montrose.

Since the Uptown event is free, it lacks benefit of the parade's huge revenue stream — rendering it less valuable to the city overall, advocates said.

"Lakeview is not interested in hosting a crowd of people who aren't patronizing Lakeview," said Scott Rizers, 21, of South Loop, who was set to perform Sunday as GUCCIROXX. "[Residents act like], 'If they're not in our bars drinking, then they shouldn't be here.' "

And whether intentional or not, slighting an event geared toward the overlooked black and Latino gay population seems wrong, said Means, who came from the South Side to celebrate Pride.

"What we're saying is, not everybody who is black is in that whole thuggish, 'I've got to shut you down' environment," he said. "They need to stop looking at everyone as the same because they're the same color."

Slo' Mo DJs took to the stage before the shutdown, but were interrupted by police who cut the music.

"It's very easy for the tide to turn against an event where you have black and brown people who have historically been targeted by law enforcement — who are also not contributing directly to the local economy — and for security to be used to encourage us to leave," Glenn said.

Glenn wasn't alone in his anger. The AIDS Foundation of Chicago said it was "very disappointed" that police officers "essentially shut down all activity from the stage."

It's a particularly bitter pill for social service agencies to swallow as providers are stretched thin as the state budget impasse reaches its second year. Center on Halsted said just days ago that not receiving a $200,000 grant from the state is putting its HIV testing at risk.

"Agencies are so strapped, it trickles down to the activists who look for financial support for events like this," Glenn said. "In this case, we meet people physically where they're at anyway to support their pressing health concerns."

Last year, the CORE Center partnered with several agencies to test 200 people, but funding cuts this year forced it to cut back, Windy City Times reported.

But the foundation ended on a positive note on Twitter, asking its followers to "spread love and #tingle on this pride Sunday."

Sad news: Pride at Montrose event was forced to end early this year. Spread love and #tingle on this pride Sunday!

"These folks put their heart and soul and put money in this," said Chicago LGBTQ activist and blogger Marquise Wiley in a YouTube video. "They got sponsors, they got HIV awareness ... and you mean to tell me you're all just going to f---ing break down the f---ing stage and cancel this s---?"

One attendee said it was "about to be the BEST Montrose Pride I've EVER seen."

"They looked for ANY reason to shut down this epic event that was catering directly to the urban minorities of our community," wrote DeoVonte Means. "THOUSANDS of dollars and MULTIPLE agencies made up this years Montrose Pride Fest and they will all be affected by the institutional racism that occurred today."