Friends Of The Parks Is A Gang Like The Gangster Disciples, Pfleger Says

CHICAGO — George Lucas' decision to pull his proposed museum out of Chicago has drawn all sorts from reactions from all parts of the city.

The Rev. Michael Pfleger of St. Sabina Parish in Auburn Gresham said he spoke with the billionaire filmmaker and his wife, Mellody Hobson, just before Lucas' announcement Friday that he will build his museum in California.

The power couple was "disappointed," and so was Pfleger, who said the lawsuit that prevented Lucas from building his museum in Chicago will cost the city thousands of jobs and other opportunities that would have gone to underserved parts of town.

In an interview, Pfleger pinned the blame on Lucas' departure on parks advocacy group Friends of the Parks, which sued to block the museum from getting built on Chicago's lakefront. He called them "a gang who lives in high-rises."

"Where I live, a self-appointed group that starts making calls for the neighborhood, they’re called a gang," Pfleger said. "It's a different kind of violence. This is economic violence.

"Let’s call them what they are: they’re a gang of self righteous elitist people that have somehow been empowered to make decisions for the City of Chicago," he said. "Tell me the difference between Friends of the Parks and the Gangster Disciples?"

RELATED: Where Does the Lucas Museum Go Now?

In a statement, Friends of the Parks said later "it is unfortunate that the Lucas Museum has made the decision to leave Chicago rather than locate the museum on one of the several alternative sites that are not on Chicago’s lakefront. That would have been the true win-win."

People took to the park group's Facebook page to share their own opinions. Some praised the group for preserving the city's lakefront, while others criticized Friends of the Parks for its lawsuit that eventually drove Lucas away.

Others were quick to note that Chicago was Lucas' second choice all along. The filmmaker, whose wife is from Chicago, shifted his attention here only after talks broke down in San Francisco. Lucas is reportedly circling another site, Treasure Island, in the Bay Area.

RELATED: Where Will the Lucas Museum Go Now? 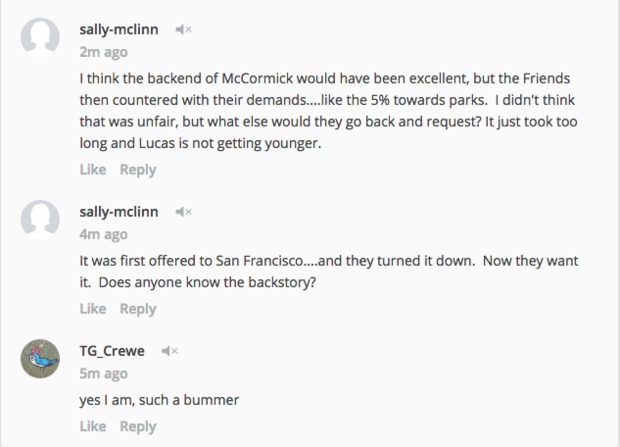 Eric Garcetti, the mayor of Los Angeles, quickly pounced on Lucas' announcement by saying that his proposed museum would be a "perfect" fit near Hollywood.

"Tens of millions of people visit our city every year — and L.A. has unquestioned stature as a world arts capital ... We would welcome the opportunity to be a permanent home for this incredible collection, which would become part of a museum culture that is unrivaled in the United States," Garcetti said in a statement.

Gino Generelli, a South Loop resident who collected 2,600 signatures on a Change.org petition urging Friends of the Parks to drop its lawsuit, said Friday he will form his own nonprofit, essentially acting as a foil against the parks group.

The group will be called the Public Spaces Advisory Council.

"Nonprofits and educational institutions have every right to be on public land," Generelli said. "Not that I don’t think what Friends of the Parks says also isn’t important, but I don’t think their mission should monopolize Chicago's public lands."

The Tribune editorialized that the Lucas adventure taught the city a number of things, including that "the struggle to protect Chicago's lakefront never ends."

"For nearly 200 years, courageous people from many walks of life have risked the wrath of the powerful in order to keep this extraordinary lakefront as open, clear and free as they could. Each generation has to fight that fight anew," the Tribune editorialized.

"There's always some well-intentioned promoter with an otherwise fine project, if only Chicagoans would agree to develop this land. As long as Chicago exists, that fight won't end — unless defenders of the lakefront surrender to people with political clout."