Here's Why Gay Bars Are So Important, Explained By A Chicago Gay Icon

BOYSTOWN — It seemed only fitting that the 46th Chicago Pride Parade became, in many ways, a victory march.

The days leading up to the 2015 parade were explosively joyful. With the Supreme Court ruling in Obergefell v. Hodges legalizing same-sex marriage nationwide, the tide finally broke in the long, bitter fight, and Boystown celebrated with new heights of exuberance.

What a difference a year makes.

Sunday's procession will begin, instead, on a somber note, with a moment of silence honoring the 49 people killed in an gay night club in Orlando June 12. Their photos and names will lead the parade.

Still, "while our hearts are heavy with grief, we have just as much anger," said Arthur Johnston, 72. "We are again under attack now. We have been under attack as long as I can remember."

RELATED: This LGBT Poet Stunned A Packed Room With Her Thoughts On Orlando Shooting

Johnston, who co-owns Sidetrack The Video Bar with his husband, has seen his community stand strong against such acts of hate, and he knows "we will do what we have always done."

"We have to reach out to each other figuratively and literally hold on to each other and move forward," Johnston said. "We find the deep inner strength we have and keep going, because we're not going anywhere."

To move forward, it is vital a new generation learns from the mistakes that caused so much harm to gay people in the past. To Johnston, these are the ugly chapters in an otherwise rich history of Chicago's LGBTQ community — much of which happened in its bars.

"It's no accident that the modern gay rights movement begins at the bar," he said. "It's the only reliable, safe place we've had."

None of the good Johnston has done in 40 years of activism would have been possible, he says, without Jose "Pepe" Peña. Johnston met the bartender in the 1970s, shortly after moving to Chicago from a teaching job in a North Carolina school. 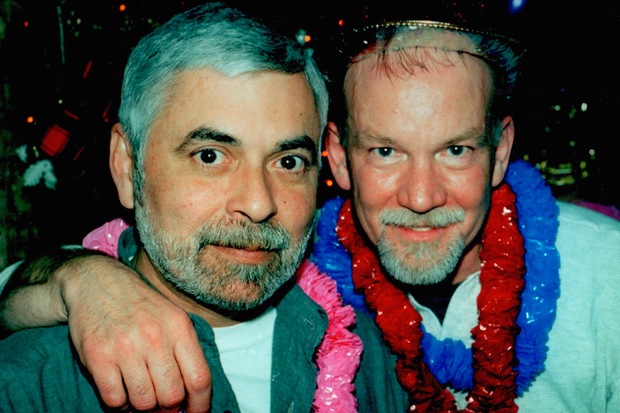 Arthur Johnston (r.) and his husband Jose "Pepe" Peña. The couple wed in October 2015 after 40 years together. [Provided/Arthur Johnston]

"I will tell you, when you've had the opportunity to love and be loved, all the rest is background noise," Johnston said solemnly. "That's a quote from somebody — not me — but that's all true."

In the decades long before the Center on Halsted or corporate floats in the Pride Parade, bars were one of the precious few places gay people felt comfortable gathering, Johnston said.

"It's another thing that makes what happened in Orlando so horrific," he said. "Because it goes right at the heart of the only places we ever had."

The dance clubs and bars were the only place many gay people could be open about their sexuality without threat, he said. Some remained closeted in their public lives, letting go only inside the walls of Sam's or the Annex.

"And back then, frankly, the police and authorities didn't even want us to have that," Johnston said. "Anybody who worked at a gay bar in the '70s was at least once arrested at one time or another."

Bartenders were frequently arrested for delivering drinks across the bar in what was considered an illegal attempt between patrons to solicit sex. During elections, "we knew what was coming," Johnston said. To prove incumbents were "anti-pervert" and tough on crime, police would raid bars without warrants.

Officers arrested people on what Johnston deemed "trumped-up charges" like disorderly conduct or public indecency. Even if the charges were later dropped, being named as an arrested patron in the newspaper's crime log risked losing jobs or friends.

Activists began to protest the harassment, boycotting gay bars that allowed mistreatment of their clientele and suing law enforcement. Many early activists had ties to the bars where they worked. 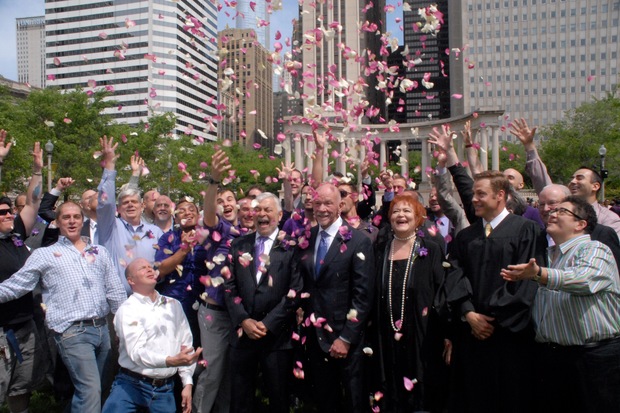 Arthur Johnston and his husband Pepe Pena celebrate with supporters of marriage equality in Chicago in 2011. [Provided/Arthur Johnston]

"Bartenders were celebrities," Johnston said — including Peña. "And because I was his partner, I was included."

At Peña's side, Johnston got involved protesting against Anita Bryant, a former Miss Oklahoma and "Florida orange juice lady" who came to Chicago for her 1977 "Save Our Children" campaign to stifle laws prohibiting discrimination on the basis of sexual orientation.

Johnston, Peña and a third business partner opened Sidetrack five years later, one of the earliest bars owned by a gay person in the budding LGBTQ neighborhood that soon became Boystown. Previously, most gay bars were owned by the mafia and located in the more popular stretch that began in River North and migrated to Clark and Diversey in the '70s, Johnston said.

"[The mafia] were the ones with enough clout, enough inside contacts to know when the raids were coming, who needed a bag of cash for them to keep from closing," Johnston said. "We were grateful, because without them, we wouldn't have had any clubs."

While the police raids largely died down by the '80s, the interactions with officers remained highly strained. Bar owners avoided calling 911 at all costs. In 1983, though, Sidetrack called for police assistance following a pool cue fight.

After a lengthy wait, two officers jumped out of an unmarked police car, Johnston said. One approached Johnston, who was outside restraining the fighter.

It took seven months to get the charges dropped.

That same year, a Tribune article asked if the city is "ready for gay rights."

"Probably not," it answered.

By 1986, Johnston joined in efforts to pass an anti-discrimination ordinance for LGBTQ people.

"Then we realized the existing human rights ordinance was so outdated, we completely rewrote it," Johnston said. Together with Jon-Henri Damski, Laurie Dittman and Rick Garcia, they became known as the "Gang of Four," dedicated to pursuing the law's passage.

"A week didn't go by when some political reporter said, 'What are you doing? This is Chicago — you're never going to pass a law protecting gay people,' " Johnston said. "And that made it all the sweeter when we finally passed it." 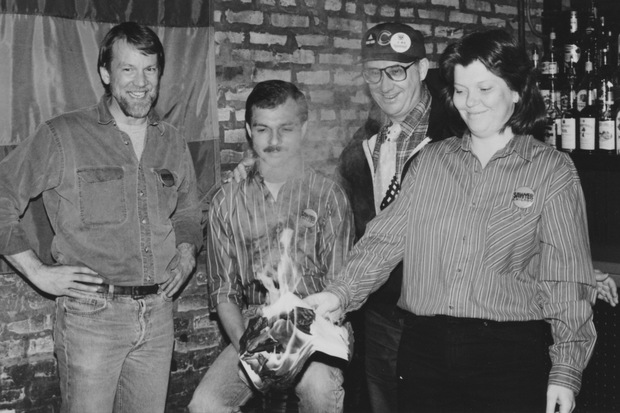 Arthur Johnston (r.), Jon-Henri Damski, Laurie Dittman and Rick Garcia were known as the "Gang of Four" and organized to ban discrimination based on sexual orientation in Chicago. [Provided/Arthur Johnston]

To Johnston, the 1988 ordinance (signed into law by former Mayor Harold Washington) extended the LGBTQ community to include professionals like attorneys and doctors, who previously risked getting fired if they came out publicly as gay. It gave them more resources and launched a cavalry of newly out supporters.

Fifteen years later, Chicago would have its first gay alderman. Today, organizers of the Chicago Pride Parade have to limit the overflowing number of entries to keep the parade under four hours, with one million people cheering from the sidelines.

And, importantly, police, public officials and businesses are on the side of the gay community.

"This has never happened in history. And that's remarkable," Johnston said.

But the fight for equality is far from over. Orlando proved that.

“It was one of the prices our community is paying for marriage [equality], no question," Johnston said. "And we must not let anybody paint this as anything but a crime against the LGBTQ community."

Caught in the middle is a new generation of gay youth, who face higher rates of homelessness and, Johnston fears, have forgotten the lessons learned during the AIDS crisis of the ‘80s and ‘90s.

"Many young people have grown up thinking they've always been able to hold hands on Halsted Street," Johnston said. "So it's a terrible lesson for many of them to learn." 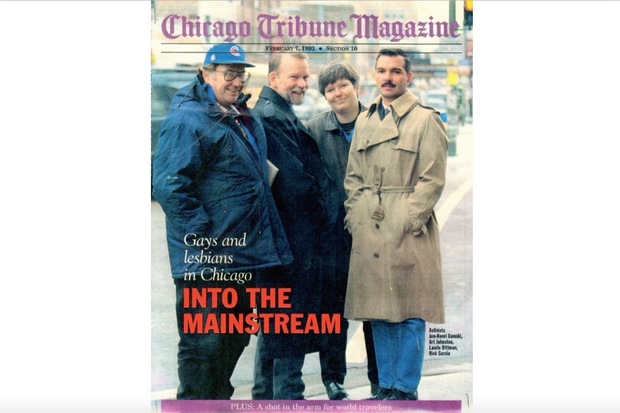 A February 1993 issue of the Chicago Tribune Magazine profiled the "gang of four" that campaigned to ban discrimination based on sexual orientation in Chicago. [Provided/Arthur Johnston]

He sees parallels in his early campaigns and the blowback in North Carolina over the passing of an anti-trans bathroom bill. Anita Bryant and her "Save the Children" campaign used the same rhetoric, spreading the same message of fear 39 years later.

Johnston's four decades of activism for gay rights culminated in his receiving the Jane Addams Making History Award from the Chicago Historical Society earlier this month.

The honor was a first for an open member of the LGBTQ community.

"It was my personal, finest moment of my life," Johnston said. He speaks openly, his grizzled voice heavy with the impact it had. "It was enormous personal satisfaction, but more than that, I really believe more good will come of this."

With no signs of slowing despite his 72 years, Johnston said he feels an "enormous sense of urgency" to share the LGBTQ community's past with the new generation to avoid repeating an ugly history.

"The message is that this can always be turned back," he said. "People who don't believe me, go read some of what Donald Trump is saying. We have to be more vigilant than ever."

That's why receiving the Jane Addams award for distinction in public service meant so much to him; it was a chance to share the history of Chicago's gay community with a roomful of the city's big wigs.

"People have no clue that Jane Addams, this remarkable woman, this lionized individual, went home every day to the arms of Mary Rozet Smith, who was her 40-year partner," Johnston said. "I saw jaws literally drop open."

There's still work to do; Johnston is pushing for more outreach to underserved factions of the gay community — transgender people and people of color who sometimes feel Boystown is just "the white boy part of town." Johnston, despite being one of the "white boys," said he gets it.

"We all hate the name Boystown," Johnston said. "We hate it, we hate what it imples." 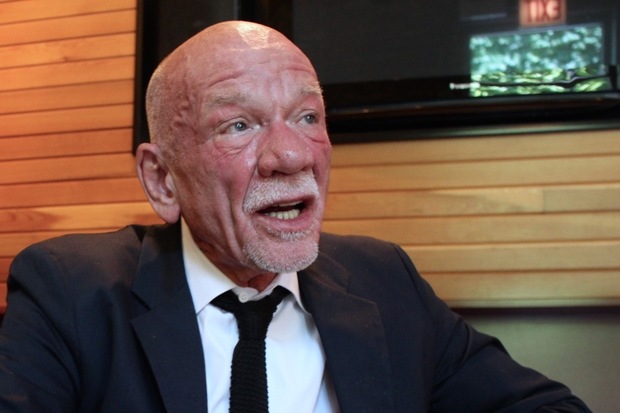 Arthur Johnston, 72, speaks about the mass shooting at a gay night club in Orlando in the days following the massacre. [DNAinfo/Ariel Cheung]

Despite the name, Boystown will always be the heart of Chicago's LGBTQ community, Johnston said. That's part of why he wants to keep the Pride Parade in the neighborhood, despite never-ending whispers of a potential move Downtown.

"If it goes Downtown, the parade will end in two to three years, as far as I'm concerned," said Johnston, who has marched in or attended more than 40 out of 46 Chicago Pride Parades.

He agrees with the general argument that Chicago police would needed to maintain a heavy presence in both areas as parade-goers migrate back to the after party in Boystown.

"Do a lot of gay people no longer live here? Of course," he said. "But there will always be a need to have a place that we perceive as ours. A place where we can be with our own."

And that, for Johnston, is Boystown.