DOWNTOWN — Before they even sold out on Tuesday, tickets to "Hamilton" in Chicago were already up on StubHub for $8,000 a pop.

A line of hundreds wrapped around the block surrounding the PrivateBank Theatre box office Tuesday morning, trying to snag the most in-demand ticket in town.

People came from all over the city and beyond for a chance to see the show that won 11 Tony awards earlier this month.

"It's historical, and it's hip hop," said one Hyde Park man who had camped out since 5 p.m. Monday. "They said this might be better than 'Cats' ... 'Cats' was on Broadway for how long?"

Tickets were still available an hour after the box office opened. Even those at the back of the line held out hope they could see the show, or at least catch some rays in line. The line moved very slow, with people moving just a few feet during the first hour tickets were for sale.

"We're part of the experience. We're technically not Chicagoans, so it's something to do," said one woman from far northwest suburban Harvard.

Broadway In Chicago said that five dates had sold out by noon Tuesday.

Those who didn't stand in line spent Tuesday morning on Ticketmaster, doing a lot of waiting. On Twitter, people complained of glitches and very slow load times:

So #HamiltonCHI tickets are already on Stubhub and yet most humans can't even get the Ticketmaster site to let them see what's available.

The show is set to run Sept. 27 through March 19 at The PrivateBank Theatre.

"Chi-Town, birth place of Kanye West, Common Sense, Chance the Rapper — some of the best hip-hop in the world and the source material for Kander and Ebb's best musical," Miranda declared. "We're coming to see you first."

While season and group tickets have been available for months, Chicago's theater crowd has been practically foaming at the mouth in wait for the single-ticket sales.

In New York, tickets start at $139, but overwhelming demand has them reselling for more than $1,000 each.

The Windy City certainly caught Hamilton fever, particularly since the Chicago production was announced in December. This spring, the Lincoln Park Zoo got national attention for naming its new camel Alexander Camelton as a nod to the record-shattering production.

The Illinois Attorney General's Office and producer Jeffrey Seller warned of fake "Hamilton" tickets, which has been an issue in New York. Officials advise fans to buy tickets from legitimate websites and read the site's policies and fee information before buying.

"It's tempting to get tickets any way you can," Seller said. "There are many sites and people that are selling overpriced, and in some cases, fraudulent tickets."

Miranda, meanwhile, has pledged to help Chicago schoolchildren see the show. Already, he received a $1.5 million grant from the Rockefeller Foundation to bring 20,000 New York kids to the show. While Rockefeller isn't paying for Chicago kids, Miranda told Complex "we're duplicating that program in Chicago."

"I'm just trying to get as many people to see 'Hamilton' as possible," he told the magazine. "Everyone is like, 'Film it and put it on TV,' but that's not the thing. The thing is seeing it live."

According to The New York Times, the show in New York is making about $600,000 per week in profit after recouping the $12.5 million it cost to launch the show. The Chicago presentation could generate $80 million, the Times estimated. 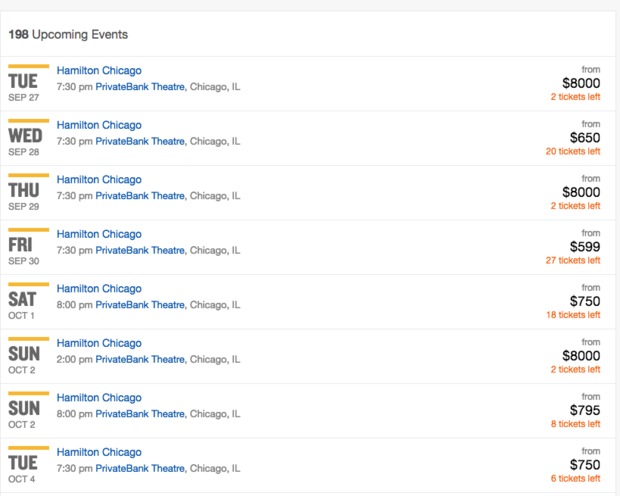