MORGAN PARK — One of the three buildings at Esmond Elementary School in Morgan Park was built in 1891, making it the fifth-oldest structure in the Chicago Public Schools' system, according to Ald. Matt O'Shea (19th).

An addition was built on the school 1865 W. Montvale Ave. in 1937, which included a gym. The two buildings house sixth- through eighth-grade students, Principal Angela Rene Tucker said.

Preschool through fifth-grade students have classes in a building constructed in 1971. This structure was built cheaply and only intended to last only 20 years, O'Shea said Wednesday.

"I'm fighting for some sort of investment in this campus," said the alderman who visited with some of the 299 students at Esmond's annual summer kickoff event.

Denise Quinn has been a teacher at Esmond for 24 years. She has 35 kindergartners in her classroom and said windows often leak and some walls actually sway if you push on them hard enough.

O'Shea said many rooms at Esmond are also too cold in the winter and too warm in the summer. As a result, there's empty space throughout the three buildings, Tucker said.

Indeed, Esmond is among 300 schools CPS considers "underutilized," according to a report released in January. The school has room for 840 students, despite enrollment of just 299, the report found.

Such data has been used to close schools in the past, and Esmond was in danger of being shuttered several years ago, O'Shea said. He fought the closure, arguing that the school tucked behind the Morgan Park Post Office serves as a hub in this often overlooked part of the 19th Ward known as Old Morgan Park.

Laurie Smith, who works as a teacher's assistant at the school and lives across the street, agreed.

"This is like a second home to our students. This is where the kids and parents feel safe," she said. 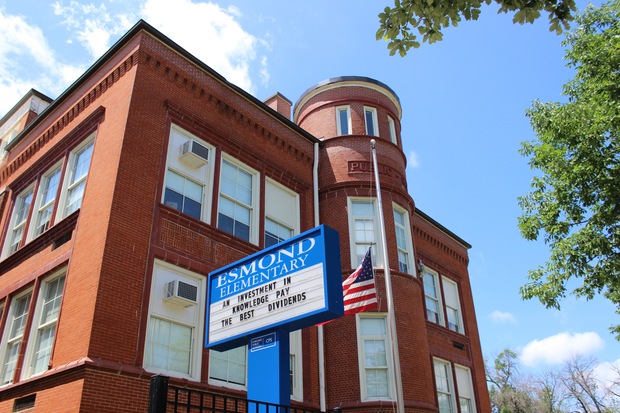 The oldest building at Esmond Elementary School dates to 1891, said Ald. Matt O'Shea (19th). The alderman said it's the fifth-oldest structure among all of the buildings operated by Chicago Public Schools. [DNAinfo/Howard A. Ludwig]

O'Shea and Tucker said they'd like to see the porous addition that dates to the 1970s torn down. With some improvements, all the students could move into the two main buildings, the pair said.

The improvements would include making the older brick buildings accessible to people in wheelchairs. A small annex might also be needed to add a lunch room, gym or another space that would be lost in a consolidation, they said.

"I don't need a Cadillac. They deserve one, but I can do without that," O'Shea said.

O'Shea admitted that proposing school improvements might seem inappropriate considering CPS is facing a $1 billion budget crisis. There's also talk of a possible strike ahead of schools opening in the fall, as the Chicago Teachers Union and the city have been unable to agree on a labor contract.

CPS is "still building in some places," O'Shea said. "I don't think we can afford to wait here." 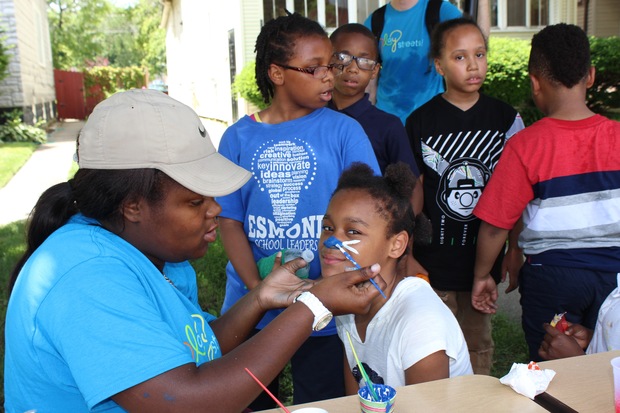 Face painters were available to students at Esmond Elementary School in Morgan Park Wednesday. The 299 students at the school enjoyed a summer kickoff party on the warm day. [DNAinfo/Howard A. Ludwig]

Of course the situation is different at Esmond. While the schools in Mount Greenwood were overcrowded, Esmond's facilities are merely old. Nevertheless, O'Shea believes tearing down the worst of the three buildings and perhaps replacing some of the asphalt that surrounds Esmond's buildings with grass could keep momentum going at the school.

O'Shea, along with several teachers on Wednesday, credited Tucker with successfully turning around Esmond in her 11 years as principal. Test scores, graduation rates and attendance have all improved in her tenure, they said.

"This school was at the bottom, and she brought it up," said Smith, adding Esmond was on academic probation as test scores hovered in the 30th percentile before Tucker arrived.

Esmond has improved but still has the second-lowest academic ranking on the five-level CPS scale, Tucker said. However, she believes Esmond will jump two spots next year, which would be no small achievement for the school with a student population CPS says is 95 percent low-income and 97 percent black, Tucker said.

"This is a good investment for the community," she said. 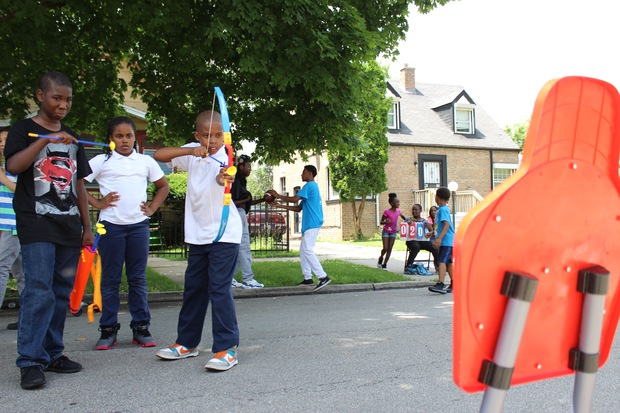 A student at Esmond Elementary School in Morgan Park takes aim at a target Wednesday with a bow and arrow. This station was among the more popular activities at the school's summer kickoff party. [DNAinfo/Howard A. Ludwig]

That said, Esmond actually saw its support cut May 21 as a result of the ongoing state budget crisis. Esmond's after-school program was shuttered after state funding was cut off, Tucker said.

She said the final bell rings at 2:45 p.m. at Esmond, but nearly half of the students would stick around until 5 p.m. for homework help and other after-school activities. She hopes to restore the program when classes resume next year.

O'Shea said that the after-school program was particularly important for kids who might otherwise be going home to an empty house. Keeping these kids busy at Esmond also helps them avoid gang recruitment, he said.

"This school is the glue that holds the Old Morgan Park community together," he said.