But don't worry. He isn't a spy or a superhero, though that would be pretty sweet.

The 48-year-old Indiana native works full time at the Ray Graham Training Center, 2347 S. Wabash Ave., as a special education aide who teaches art classes and assists students with such tasks as using the bathroom.

After work, in an unfinished basement studio at his North Side home, Thompson paints. 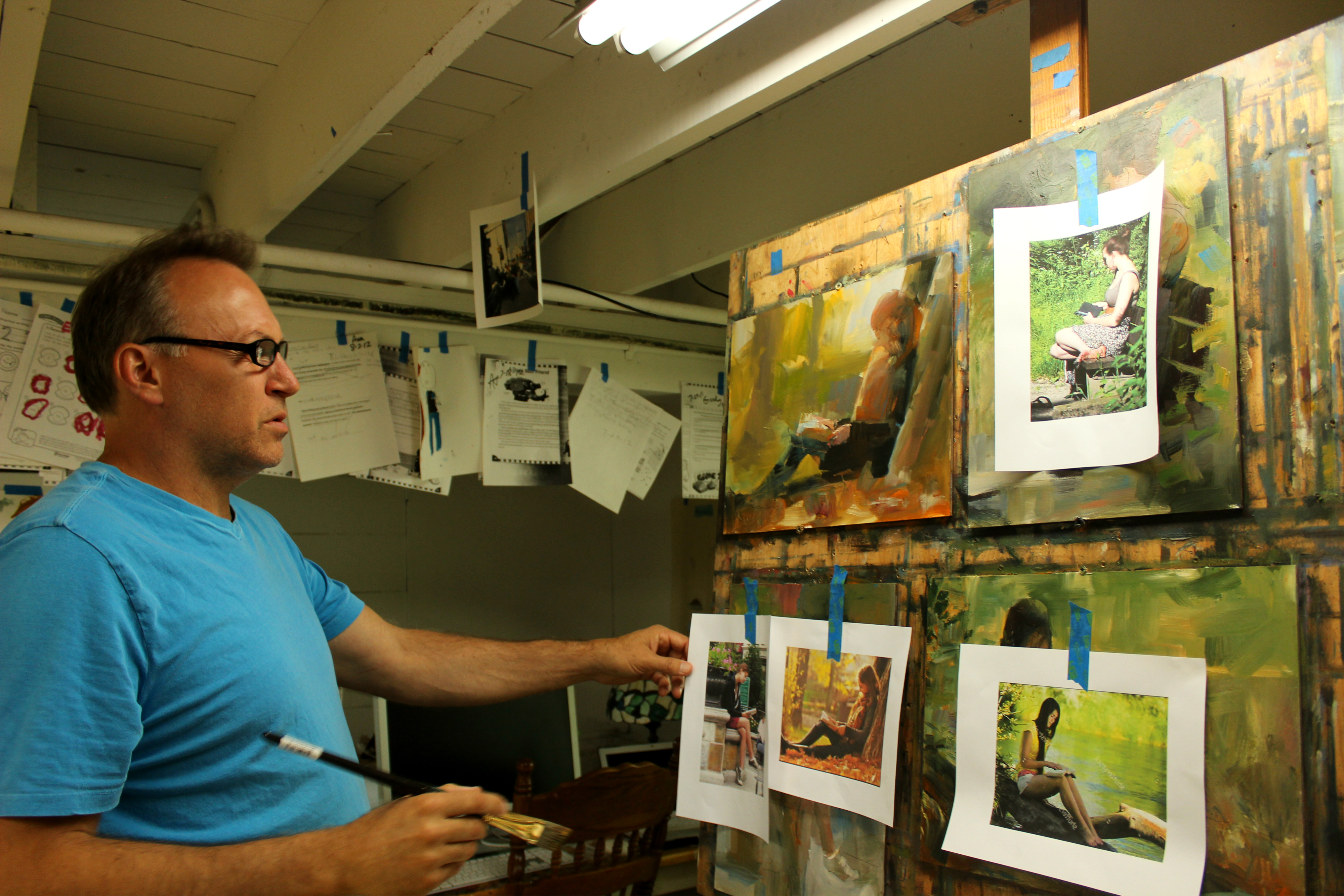 Thompson’s work has caught the attention of art buyers all over the world. He is now the best-selling U.S. artist on Artfinder, an online marketplace where artists can sell their paintings.

His work has landed in collections as far away as Australia, New Zealand, Germany and Spain. 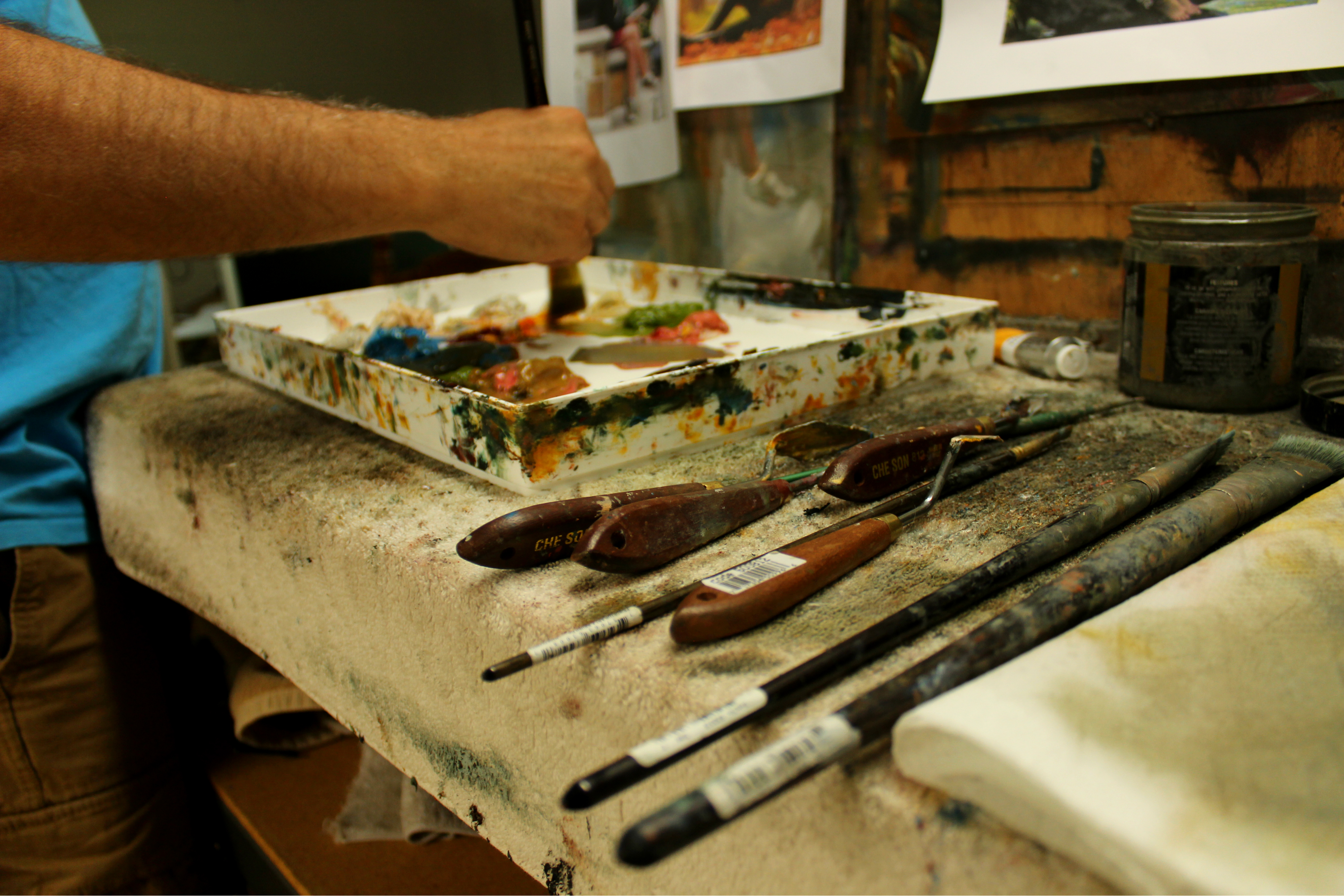 Thompson was not an overnight success.

Born in Anderson, Indiana, Thompson earned a full-ride football scholarship to attend the University of Indianapolis. After playing tight end for three seasons, he decided to give up the scholarship and chase his dream of becoming an artist.

He traveled to Georgia to study art at the Savannah College of Art and Design.

Thompson graduated in 1996 and began his career as an illustrator, taking more than 2,000 assignments on deadline as a political cartoonist and illustrator for newspapers and magazines like the New York Times, Los Angeles Times and Sports Illustrated. 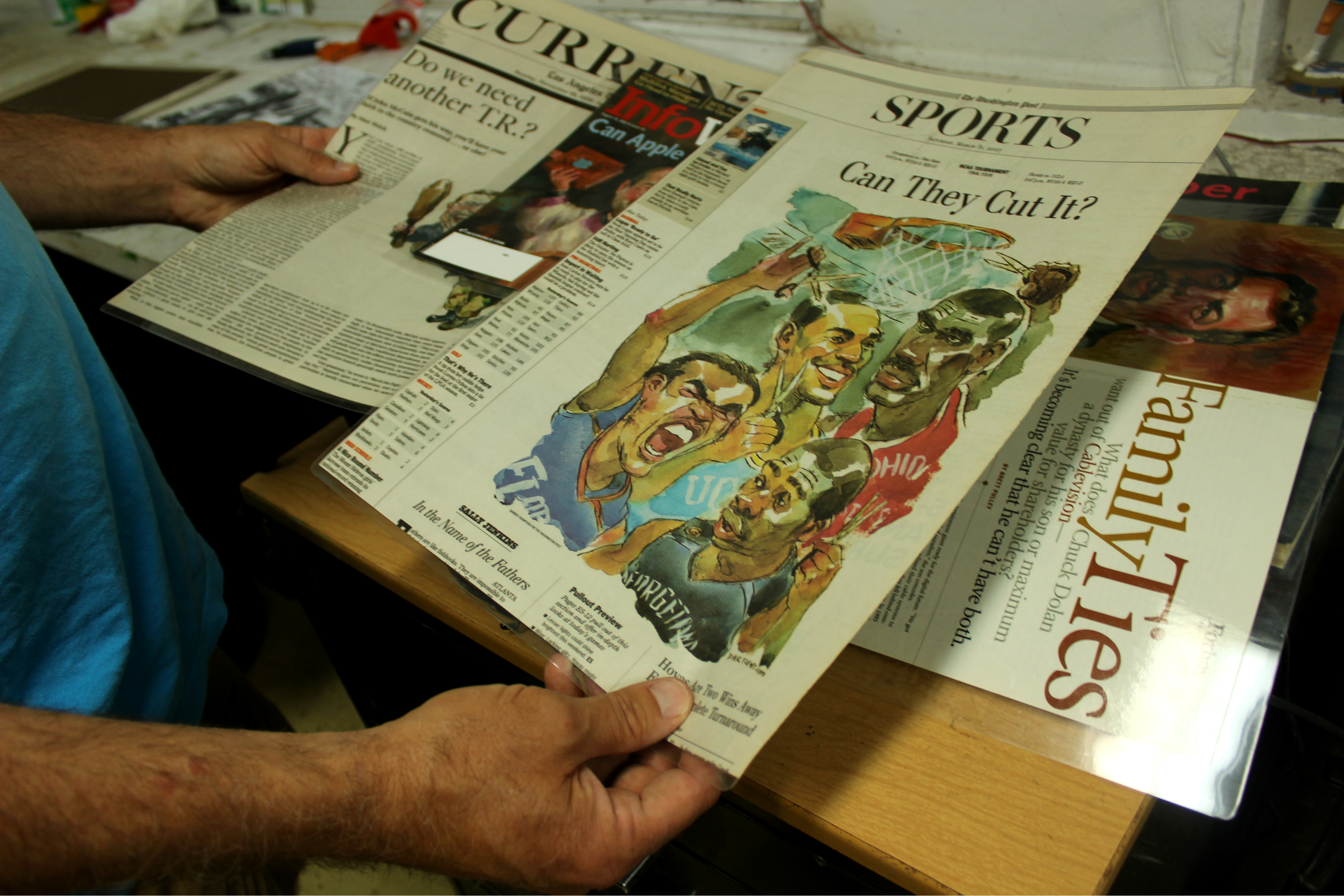 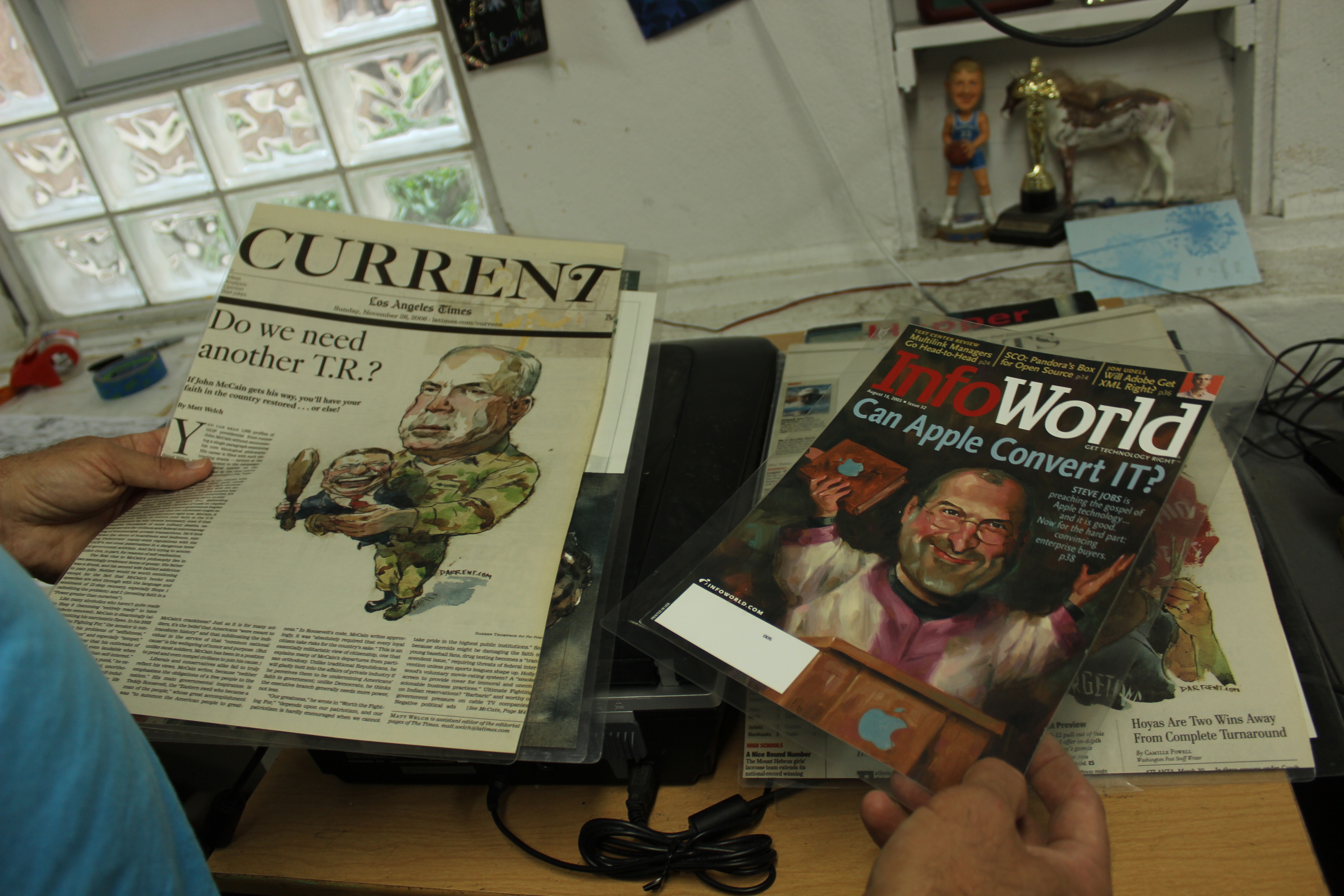 “I made a really good living with it,” Thompson said, “but in the early 2000s, things started to slowly fade away.”

In 2006, with a young daughter and a son on the way, Thompson moved to Chicago to be closer to his wife's family. When the publishing industry collapsed with other businesses in 2008, Thompson's work dried up.

He had to find a new gig to pay the bills.

His search led to a job as a Chicago Public Schools porter, working in lunchrooms all over the city, where he mopped floors and looked for rat droppings.

During the downturn, Thompson kept painting. With two young children at home, Thompson had to wake up at 4 a.m. every day to do his art.

This time, instead of a pencil, he picked up a brush and oil paints.

“Painting is something I’ve always wanted to do,” Thompson said. “The illustrations were a training ground for the painting. It’s like a band starting in the little clubs until they make the big time.”

Thompson eventually ended up in the classroom as a teacher’s aide, teaching special education students art and life skills, work he quickly fell in love with.

His oil paintings center on the human figure and movement. His works often capture characters in the rush — or lull — of life.

His painting "Directional Map" depicts a woman sitting on a bench reading a map. "Shake Not Stirred" shows a bartender mixing a drink.

Thompson usually works on about 20 paintings at a time. He sets a timer on his phone and works in five-minute sessions, moving from one painting to another. 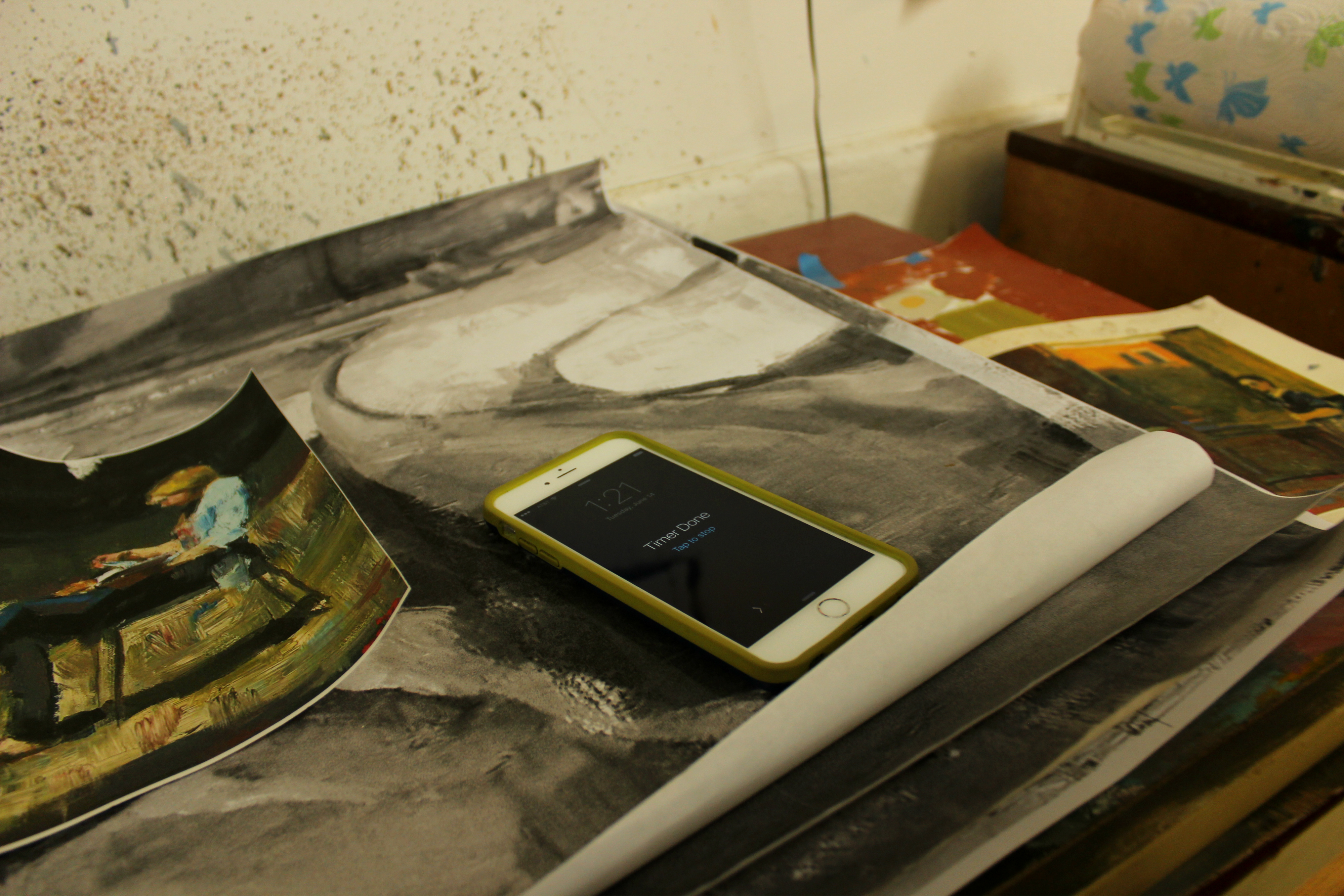 "It's something I learned in school," Thompson said. "It takes the pressure off."

At the beginning of his career, Thompson could have never imagined what his path to success would look like — but there were two philosophical guideposts he has kept in his sights since the start:

“Patience,” Thompson said, “and a lot of faith in yourself.” 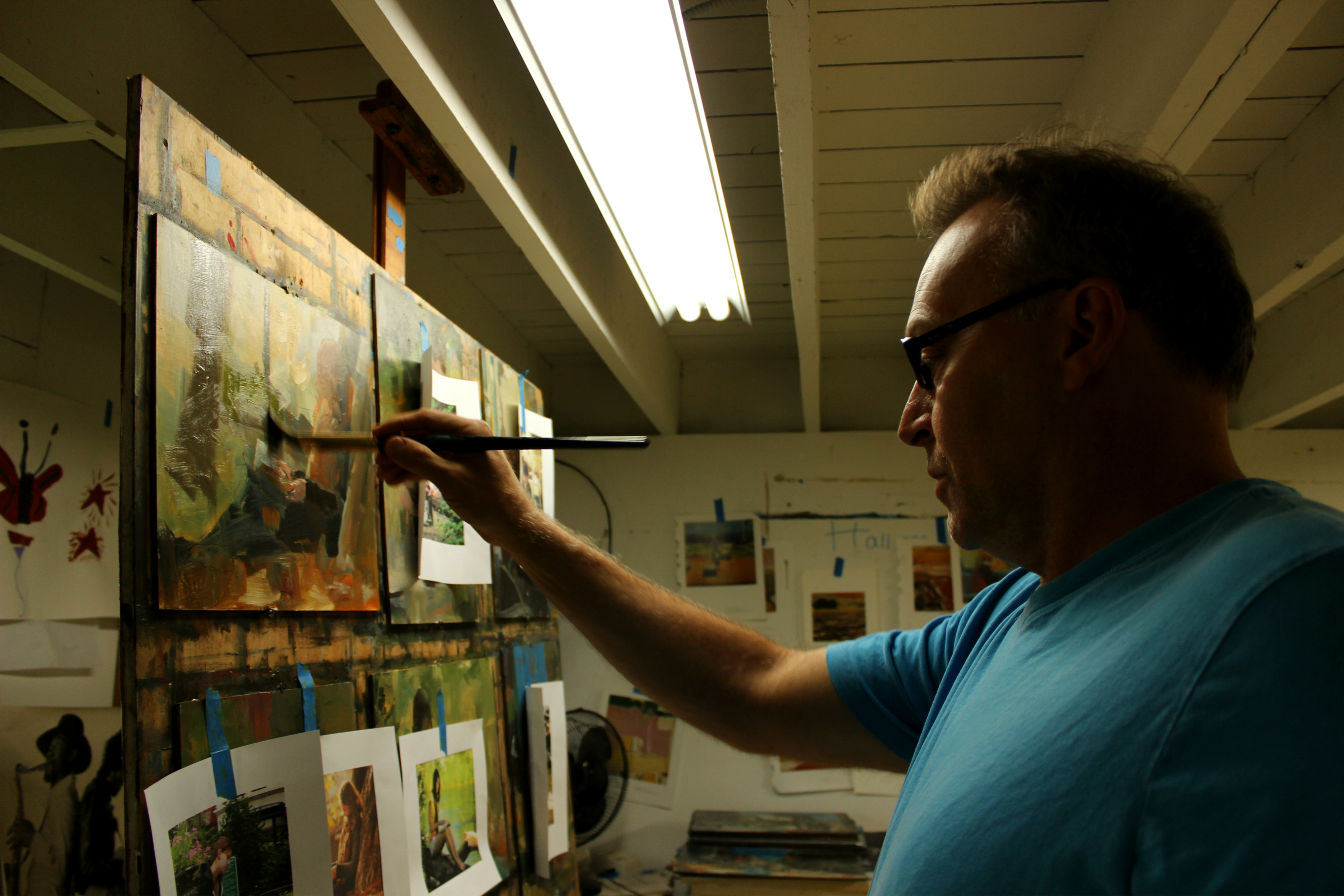 Many Of Chicago's Wooden Streets Are Still Intact, They're Just Paved Over