At a meeting hosted by 38th Ward Ald. Nicholas Sposato, Johnson told the several hundred people gathered at St. Francis Borgia church that he agreed that more officers should to be assigned to the district, which is among the safest districts in the city, according to crime data.

"We're going to build up police resources out here a little bit better," Johnson said. "You all will see more officers coming to the ... District real soon."

But Johnson didn't specify when the additional officers would begin to patrol the district, nor did he say how many would be assigned to the largest district in the city.

"The actual number has yet to be determined," Johnson said, adding that he would assign both newly sworn-in officers fresh from the academy and veteran officers. "You'll get some every month. They will be coming."

After the meeting, Johnson said in a brief interview he did not know how many more officers the district needs.

Although the crowd — filled with off-duty city employees, firefighters and police officers — applauded the superintendent often and laughed at his jokes, he also faced skepticism from some of the dozen or so residents who questioned him, Jefferson Park Police District Cmdr. Bill Looney, Ald. John Arena (45th) and Sposato. 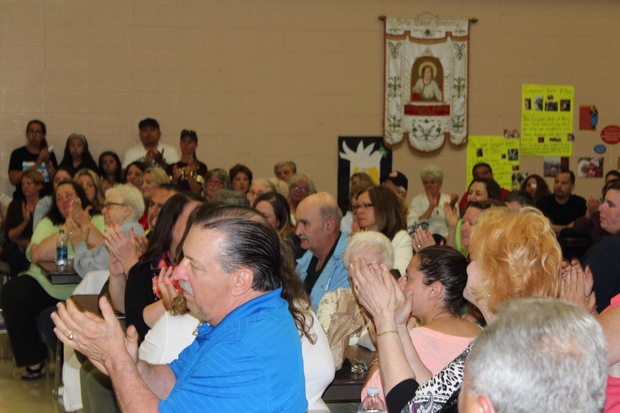 Johnson said he would hold another community meeting on the Far Northwest Side in a year to allow residents to hold him accountable for his promises.

Sposato, a firefighter, wore a "Police Lives Matter" T-shirt, a slogan used by some who criticize the Black Lives Matter movement as being anti-police.

Joanna Wozniak, who wore a Chicago Fire Department T-shirt and said her husband was a firefighter, told Johnson she wanted more officers to patrol on foot or on bicycle near her home near Chopin Park in Portage Park.

"I know you all are needed elsewhere, but you are needed here, too," Wozniak said.

Others pressed Johnson and Looney to stop what they said was a huge increase in burglaries on the Far Northwest Side.

In fact, burglaries in the Jefferson Park Police District are down 14 percent in 2016, Looney said.

The Far Northwest Side has been largely immune from the violence now sweeping the South and West sides.

"You live in one of the safest communities in Chicago," Sposato told the crowd before Johnson spoke. "That's a fact. Our officers do a great job. We just need a few more of them."

In Portage Park, there have been four non-fatal shootings in 2016. In all of 2015, there were 10 shootings and no murders.

In the Forest Glen community area, which includes Sauganash, there were two non-fatal shootings earlier this year, the first in at least a decade.

In Norwood Park, there has been one murder and one non-fatal shooting in 2016.

In Dunning, there has been one murder and one non-fatal shooting that claimed two victims this year.

There have been no shootings in Edison Park, Jefferson Park or the O'Hare community areas in 2016.

In all, there were 311 shootings and 388 people shot last month, according to a DNAinfo Chicago analysis of data. Sixty people were killed in shootings, with at least 64 homicides overall.