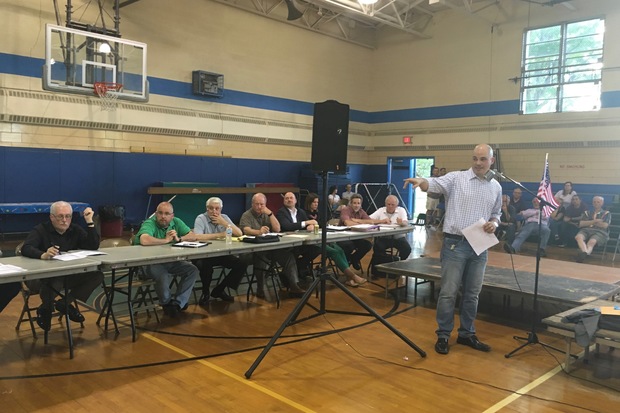 Developer Tim Pomaville tells the 41st Ward Zoning Advisory Committee that the Bicycle Flats development is targeted at younger buyers who commute on two-wheels or by Metra. [DNAinfo/Heather Cherone]

EDGEBROOK — A skinny vacant lot in Downtown Edgebrook would be transformed into the Far Northwest Side's first official Transit-Oriented Development and the only one in the city designed for bicycle commuters, according to plans under review by the 41st Ward Zoning Advisory Committee.

The six-condominium development at 5306 W. Devon Ave. is designed to take advantage of Downtown Edgebrook's Metra station and the extension of the North Branch Trail, which is under construction, said Ambrosia Homes founder Tim Pomaville.

Along with three parking spaces, the 25-foot wide building — dubbed "The Bicycle Flats of Edgebrook" — would include 12 bicycle storage units, Pomaville said.

Because the project is within a quarter-mile of the Metra station, it is not required to provide any parking spaces, according to city ordinance.

Pomaville, who is building a home in Edgebrook for his family, said the project would bring "new interest" to Edgebrook and help efforts to bring more foot traffic to the business district.

"This is targeted at younger buyers who don't want to be burdened with all the tasks of home and car ownership," Pomaville said. "We're trying to do something really special with this building." 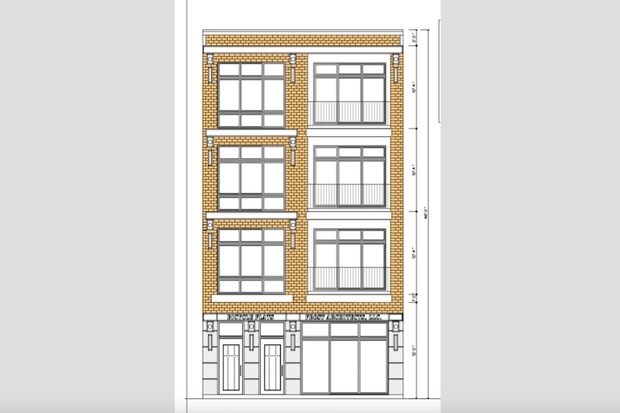 Originally set to be four stories and eight condos, plans now call for The Bicycle Flats at Edgebrook to be three stories and six units. [Ambrosia Homes]

Originally set to be four stories and eight units, Pomaville said Wednesday he would make the building three stories and six units in response to concerns from the committee that the building would be too tall for the commercial district near Devon and Central avenues.

Several members of the committee said the height of the building had been their main concern, and praised Pomaville's decision to lower it.

"It will blend much more easily at three stories with the other buildings," said Liz Dechant, the representative of the Oriole Park Community Club.

But even those changes may not be enough to win the recommendation of the committee, made up of representatives of neighborhood groups in Norwood Park, Edgebrook and Edison Park. The committee makes recommendations to 41st Ward Ald. Anthony Napolitano on whether projects should be granted special permission by city officials and built.

Several members of the committee said they were skeptical that residents of the complex would rely on bicycles to get to work and go grocery shopping and would take up the already scarce spots on the streets in front of their houses.

Committee Chariman Mike Emerson was the only member to endorse the project without reservation, saying it would fill in the "missing teeth" of Edgebrook's downtown.

While Napolitano said he would defer to the committee's final decision — expected at its next meeting set for 6:30 p.m. July 6 at Olympia Park, 6566 N. Avondale Ave. — he also said he supported the project.

"It is a great idea, a great concept that could help an area that has lost its way," Napolitano said.

Everyday Edgebrook, a group that broke away from the Edgebrook Chamber of Commerce last year, is working to bring more foot traffic to the business district in an effort to help shops thrive. 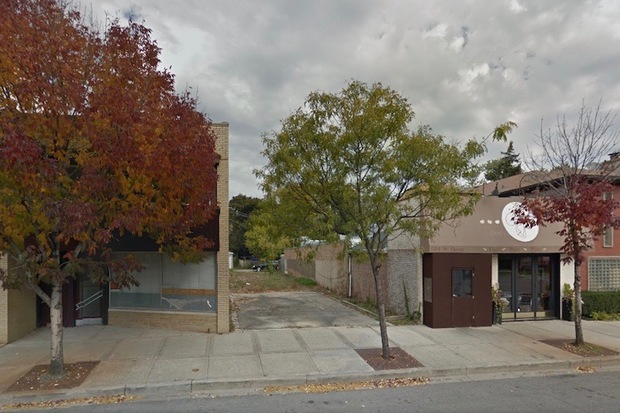 The Bicycle Flats at Edgebrook would be built on what is now a 25-foot vacant lot in the heart of Downtown Edgebrook. [Google]