May is National Burger Month, so each week DNAinfo is bringing you the story of a unique burger and its maker. Here's the final burger.

CHICAGO — Secrets are hard to keep, secret menus even more so.

Sooner or later, word gets out via food blog, news release, stories like this or even actual word-of-mouth that you, the customer, are not bound to what's printed on paper, that there is an entire sub-menu of dishes waiting to be unearthed and (secretly) enjoyed.

At M Burger, customers have been in on the off-menu Barnyard Burger, Roman-Style, for the past six years.

You know what it means to drag a hot dog through the garden, but did you know you can take a burger through the barnyard?

It’s protein-heavy but not as unwieldy as it sounds: a griddled quarter-pound beef patty under a mound of peppery brown sugar-glazed bacon, under a cloak of sharp American cheese, under a flattened chicken breast, plus sauce, pickles, chopped onions, sliced tomato and, for that inimitable crunch, iceberg lettuce.

As for Roman-style? That means swapping out the bun for grilled cheese sandwiches, top and bottom.

It would “definitely make a great late-night snack after… a little bit of a late night,” said M Burger chef and partner Tim Hockett.

Indeed, orders for the Barnyard Roman spike on the weekend, he said. 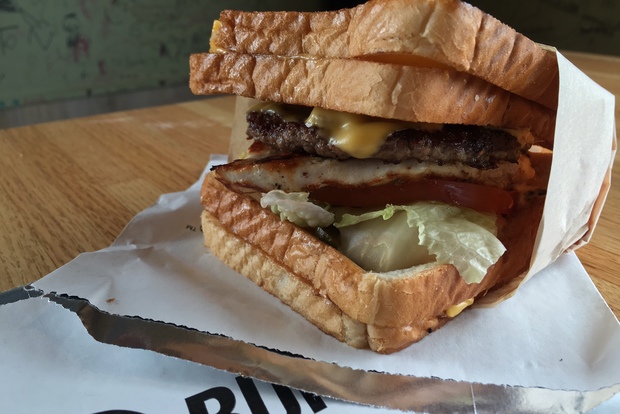 Grilled cheese sandwiches stand in for the bun on an M Burger "Roman-style." [DNAinfo/Janet Rausa Fuller]

You can order any burger or sandwich Roman-style at M Burger. Credit for that goes to a frequent customer at the original 161 E. Huron St. location whose first name is Roman.

Roman works at the Apple store nearby and comes in on average four days a week, according to Hockett. When the restaurant first opened, he ordered a burger, but with a grilled cheese sandwich instead of a bun. Staff obliged. It became Roman's standard order and soon enough, his co-workers were coming in asking for the same thing.

That’s generally how the M Burger “secret” menu works. It’s a repository for customers' quirks, staff favorites and other inspired ideas that need an audience. (Hint: You can access it online if you scroll over the M Burger website just right.)

“We knew we wanted to keep the regular menu as small and tight as possible so we could execute it well like a roadside burger stand,” Hockett said. “So anytime we have an idea for something new, we pop it on the secret menu."

Sometimes, a secret item will earn a permanent spot on the menu. The Hurt Burger, for example, which is topped with barbecue sauce, pepperjack cheese, pickles and onions, was too popular not to add to the menu, Hockett said.

The Barnyard Burger satisfies customers’ requests for an M Burger (essentially a classic bacon cheeseburger) crossed with a chicken sandwich. The chicken is first marinated in a housemade buttermilk ranch dressing that tenderizes and seasons it.

“When it hits the griddle, it caramelizes on there,” Hockett said.

The Barnyard Roman costs $9.54, excluding tax. It’s not the heftiest burger on the menu. That distinction goes to the Noah’s Ark, which is two of each meat layer — but if you order it Roman-style, you only get two grilled cheese sandwiches, not four. 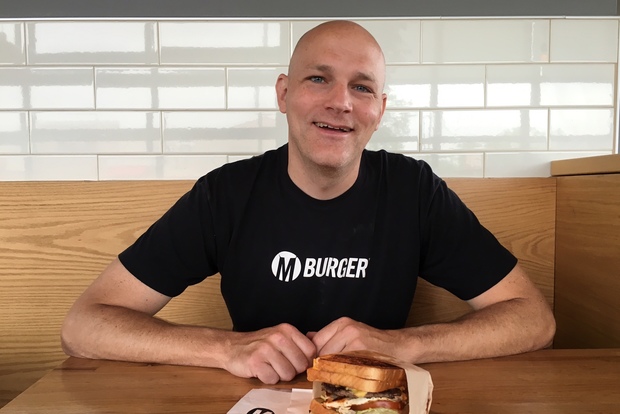