Meet the Bluesman Named Lazer Who Performed for Students At Vanderpoel

Three students from the John H. Vanderpoel Humanities Academy tried out for the job, singing in the school auditorium alongside the "King of Israeli Blues."

"I never get more nervous than when I have to perform for children," Lloyd said. "Kids can smell a faker a mile away."

Lloyd was visiting Chicago as part of the Israeli Jazz and World Music Festival, which runs through Thursday. The weeklong festival includes five artists performing at seven different venues. 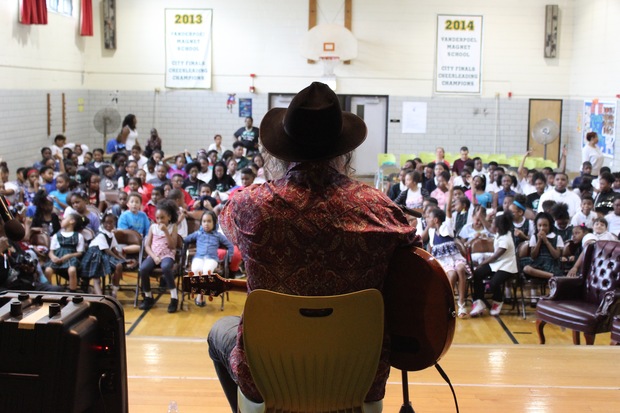 Lazer Lloyd looks out Friday on the crowded auditorium at John H. Vanderpoel Humanities Academy in Beverly. The artist was visiting Chicago as part of the Israeli Jazz and World Music Festival. [DNAinfo/Howard A. Ludwig]

The featured artist at the school at 9510 S. Prospect Ave. in Beverly was performing on the heels of his show at Buddy Guy’s Legends in the South Loop. Lloyd said Buddy Guy will likewise perform in Israel in July.

"Someone told me once that the blues came out of conflict," Lloyd said. "And in Israel, there's no lack of conflict."

Lloyd has lived in Israel for 22 years. He has five children and told the students at Vanderpoel about how he and his family have had to retreat to a bomb shelter on more than one occasion.

He also told the students that living through this scary situation only made them stronger, and he encouraged those in the audience to look at challenging situations in their own life similarly.

"Jews, we have got plenty of blues... But each person has his or her own blues," he said.

Lloyd was born to Jewish parents in Brooklyn, NY. As a child, he also lived in New Jersey and Connecticut. His family was largely secular, he said.

Lloyd was eventually invited to play the blues in Israel. There, he met his wife and laid down roots. He also began taking a more serious approach to his faith.

His given name is Lloyd and his Hebrew name is Eliezer, which is commonly shortened to Lazer in Yiddish. Fellow musicians dubbed him Lazer Lloyd as a result. 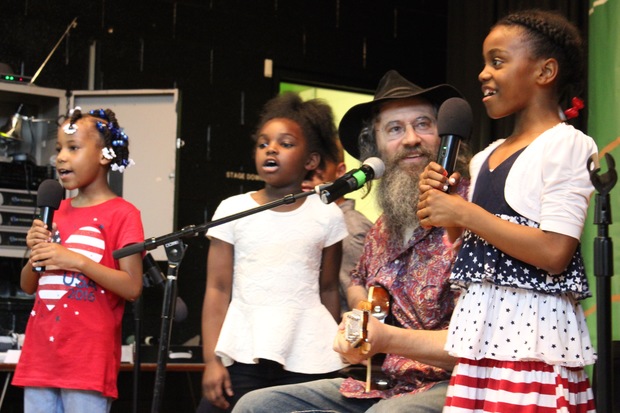 Lloyd found himself in Beverly due to the efforts of the Rev. Shaunte Brewer of Prayer Tabernacle Church of Faith. The church is located across the street from Vanderpoel Academy, and Brewer also operates VISION Outreach in conjunction with the school for after-school and summer programs. Brewer first met Lloyd at a similar performance at a school in Hyde Park.

Lloyd said visiting Chicago energizes him as a bluesman. The school on the Far Southwest Side with 289 students did its part to keep that fire burning ahead of the weekend performances for the fourth annual festival.

"This is one of the blues capitals, so we come here a lot," he said.

Sitting on the school's stage, Lloyd further explained how blues laid the foundation for other, popular styles of music, such as rap and hip hop. The music history lesson seemed appropriate.

"Who started the blues?" Lloyd asked the crowd.

"You," the crowd shouted back.

For more information about the Israeli Jazz and World Music Festival, visit the event's website.