Portage Park Starbucks Plan Thrills Many, But Others Wary Of Traffic

PORTAGE PARK — A proposal to open Portage Park's first Starbucks drew rave reviews Thursday night — but plans to include a drive-thru window were criticized by some who said they were concerned it will snarl traffic in the Six Corners Shopping District.

Ald. John Arena (45th) said the proposal to transform Family Fruit Market's overflow parking lot at 4151 N. Cicero Ave. into a Starbucks with not only a drive-thru but also an inside seating area, 15 parking spots and an expanded patio was exciting.

"With this addition, we have the makings for a vibrant shopping area," Arena said. 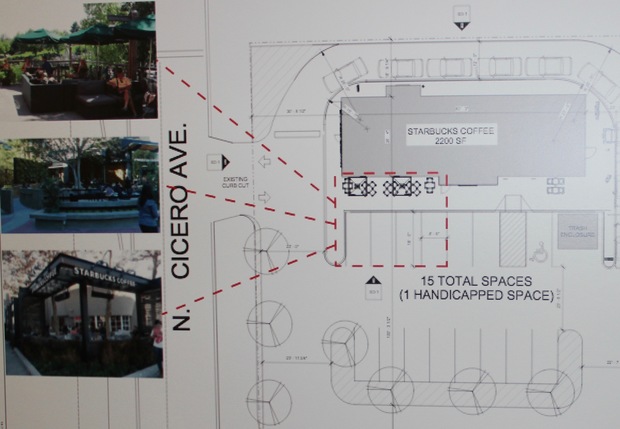 Arena has been working since he was first elected in 2011 to reverse more than two decades of stagnation at Six Corners, which was once known as the city's premiere shopping destination outside the Loop.

"A Starbucks can help change Six Corners' reputation as a place to get through rather than a place to stop or a destination," Arena said.

Family Fruit Market — beloved by many Far Northwest Side residents for its guacamole and fresh salsa — is expected to close by the end of the month after 24 years.

Tad Hwang, who lives a few blocks from the proposed cafe — which could open in September 2017, said he believed it would increase the value of his home.

The store at 4118 W. Cicero Ave. and the parking lot across the street have been sold to different developers, and Arena said Thursday it is unclear what will replace the grocery store.

Scott Goldman, a principal with Baum Revision, the firm developing the parking lot property, said Starbucks "had been looking for a site in the 45th Ward for a long time.

In 2014, Goldman oversaw Baum Revision's renovation of the Gladstone Park Plaza, which had been vacant for 10 years.

To reduce gridlock, initial plans for the Starbucks would prevent drivers from turning left to enter or exit the site, Goldman said.

However, that did little to mollify critics of the proposal, which needs special permission from city officials as well as the alderman's support.

City Newsstand and Cafe owner Joe Angelastri said he was glad to see Starbucks coming to Six Corners, but said he was disappointed that Starbucks planned to build a cafe with a drive-thru rather than one designed to encourage people to walk or ride a bicycle to get a cup of coffee.

"It is too suburban for this area," Angelastri said. "It won't help the way a traditional Starbucks would."

However, Goldman said Starbucks was not interested in opening any new locations without drive-thru windows because they increase revenue by approximately 40 percent.

The proposed location will be similar to the Starbucks at Dempster Street and Dodge Avenue in Evanston.

Others said they were worried the drive thru would increase traffic and air pollution near their homes on Berteau Avenue and Kilpatrick Avenue.

In response to those concerns, Arena said he would ask the Chicago Department of Transportation review traffic in the area once the store is built to determine whether some streets should be made one-way or other traffic control devices — such as speed humps — installed.