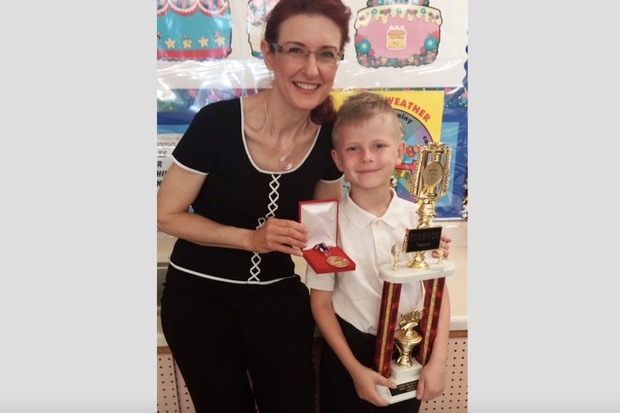 The students at St. Constance School in Jefferson Park are masters of communicating old-school style — with pen and ink.

William Markevich beat out 40,000 other participants in the annual Zaner-Bloser Handwriting Contest to be named the grand national champion for second grade, school officials said.

The Jefferson Park school claimed the top prize in the second-grade competition for the second year in a row. Last year, Emilia Poczatek brought home the trophy and bragging rights.

In its 25th year, the National Handwriting Contest is sponsored by Zaner-Bloser to promote legible handwriting.

Students are judged on the Zaner-Bloser keys to legibility: shape, size, spacing and slant. Students in kindergarten through second grade submitted manuscript, or printed, entries, while students in third through eighth grade submitted entries in cursive.

William won a large trophy and $1,000, while the school got $1,000 in educational materials. Second-grade teacher Patti Prokuski won a trip to the International Literacy Association annual conference in St. Louis in July. The school will also display a framed certificate.

In addition, each state winner won $200 in educational materials for the school from Zaner-Bloser.

Realtor Who Helped Integrate Beverly To Be Honored