Notorious Cop Glenn Evans Back To Work, And Now His Old Boss Is In Charge 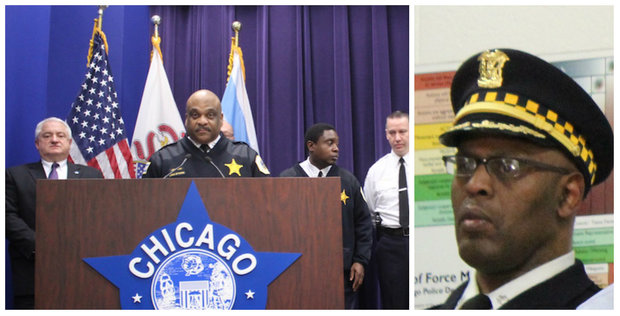 By Andrew Fan and Sam Stecklow

CHICAGO — Glenn Evans is back. The former Chicago Police commander accused of shoving his gun down a suspect's throat has wrapped up his suspension and returned to a department now led by his old boss Eddie Johnson.

Earlier this month, Police Supt. Johnson told a small gathering of the Park Manor Neighbors Community Council that Evans, who was acquitted of the aggravated battery and official misconduct charges tied to the 2013 incident in December, is back on the force after a 1½-year suspension.

Evans, demoted to lieutenant, is on administrative duty at police headquarters in Bronzeville.

Johnson recently declared he’s never witnessed police misconduct, but he directly supervised Evans during a time when a series of serious misconduct charges were lodged against Evans.

With the exception of a single one-year stretch, Evans reported directly to Johnson between March 2008 and March 2014. While working under the future superintendent, Evans racked up at least 11 formal complaints, including an incident in which then-lieutenant Evans allegedly fractured bones in a woman’s face at the headquarters of the district where Johnson was commander.

Even though investigators eventually recommended discipline for Evans in that case, he later was promoted to district commander, again serving directly under Johnson, who at that point was a deputy chief.

Johnson’s confirmation of Evans’ return to the force, which came in response to an audience question during an unannounced visit to a South Side community meeting at St. Columbanus Church, comes five months after Evans was acquitted of the battery and misconduct charges.

In January 2013, then-commander Evans was alleged to have chased a gun-possession suspect into an abandoned building, where he was accused of tackling the man, sticking his gun into the man’s mouth and pressing his Taser against the man’s groin.

While serving under Johnson as both a lieutenant and later a district commander, Evans won widespread praise from community leaders for his aggressive style of policing. Still, the numerous excessive force allegations surrounding Evans call into question whether his longtime supervisor, now head of the Police Department, can truly address police misconduct in the city.

In a March 29 interview with CBS2, Johnson declared that “I’ve actually never encountered police misconduct, 'cause you got to understand, officers that commit misconduct don’t do it in front of people that they think are going to hold them accountable for it.”

Several cases involving Evans, who did not respond to interview requests, and other officers serving under Johnson raise doubts about that claim.

Johnson and Evans: A Timeline (story continues below)

Johnson commanded the Gresham District, which includes the South Side neighborhoods of Chatham, Auburn Gresham and Park Manor, between March 2008 and August 2011. Evans served as one of his lieutenants during that period.

In April 2011, Evans allegedly pushed his hand into the face of a recently arrested woman, Rita King, for minutes on end. King claimed in a federal lawsuit that Evans repeatedly told her, “I’m going to push your nose through your brain,” and hospital records from a visit several days later show that King suffered multiple bone fractures in her face, according to a report by WBEZ.

The Independent Police Review Authority, the police watchdog often criticized for supporting officers against their accusers, found some of her claims credible and recommended Evans receive a 15-day suspension. The incident involving Evans took place inside the Gresham District headquarters, where both Evans and Johnson worked at the time.

IPRA sustained a second complaint against Evans later in 2011, stemming from when the lieutenant, off-duty and in civilian clothes, allegedly threatened Chas Byars at a South Side diner after Byars criticized his treatment of another patron. While arresting Byars, Evans caused the man’s infant son to fall from his carrier and hit his head on a table. IPRA recommended a seven-day suspension for Evans in the case. This incident took place after Johnson had been moved to an interim position in which he was not Evans’ direct superior.

Despite the charges, Evans soon would be promoted to work directly under Johnson again. After then Supt. Garry McCarthy elevated Johnson to deputy chief for Area Central in March 2012, Evans was chosen to serve as one of his district commanders — bypassing the rank of captain entirely — to take over the Grand Crossing District, just northeast of his old post in the Gresham District.

Evans continued to rack up citizen complaints, even while in charge of an entire police district. While serving under Johnson as the commander of the Grand Crossing District, Evans received eight complaints in a little more than 1½ years, according to data from the Invisible Institute.

During that period, only 14 of the Chicago Police Department's roughly 12,000 officers received more complaints than Evans. His complaint numbers were high for a senior officer: The 22 current district commanders received only six total complaints in the same stretch. In total, police records obtained by WBEZ show that Evans has been the subject of more than 120 misconduct allegations over the course of his nearly 30-year career. About half of these cases relate to excessive force.

Additionally, four federal lawsuits have named Evans as a defendant for acts of alleged misconduct committed while directly under Johnson’s command. Since 2002, the city has paid out more than $300,000 in settlements stemming from misconduct complaints against Evans, without admitting to any wrongdoing.

Community members appreciated the working relationship between the two officers, however, with some tying Evans’ tactics under Johnson’s supervision to a general decline in crime.

After Johnson was assigned to the Gresham District and promoted Evans to be his tactical lieutenant, “Crime ceased to rise and started to decline. Our community was elated at the effectiveness of both Commander Johnson and Lieutenant Evans,” Keith Tate, president of the Chatham/Avalon Park Community Council, said at a September 2014 Police Board hearing.

Tate also tied Evans’ later “relentless efforts” in the Grand Crossing District to a drop in the crime rate.

At the meeting in Park Manor this month, Johnson declined to elaborate on exactly where in the department Evans’ new job is, though police spokesman Anthony Guglielmi clarified that Evans, who returned to work on May 1, is still stripped of his police powers. He had been on an unpaid suspension since his indictment in August 2014.

Though Evans was acquitted of criminal charges in December, he remains the subject of an IPRA investigation, according to Guglielmi. Johnson’s announcement of Evans' return originally was noted by Worlee Glover, a community member who attended the meeting, on the Facebook group Concerned Citizens of Chatham.

Despite the many accusations against Evans, he remains well-regarded by community members in his old districts. Park Manor Neighbors Community Council President Darlene Tribue said in a phone interview that as commander, Evans made the Park Manor community, which sits between the Grand Crossing and Gresham districts, feel safer.

“They would see him standing on the street, and the gangs would run the other way,” she said.

When Supt. McCarthy transferred him from the Grand Crossing District to the Harrison District on the West Side in March 2014, Tribue led community members to protest outside police headquarters. McCarthy acknowledged the community’s frustration, saying at a Police Board hearing that month that he had moved Evans because he was his “favorite among [his] favorites,” and needed him in the increasingly violent West Side district.

“I don't condone any violation of the law but I respect Commander Evans because he is brutally honest with residents about what is going on,” Glover wrote in an email. “There were those in attendance [at the Park Manor meeting] who made it clear they would take Commander Evans back.”

Tribue said in a phone interview Tuesday that things in Park Manor since Evans left are “back to the way [they] were before him.”

On the surface, the city crime statistics reflect her statement. While Evans was Grand Crossing District commander, serious crimes steadily declined, hitting a plateau in 2015, the first year after he left.

These statistics mirror citywide crime drops, however, and the Police Department’s record-keeping under McCarthy has been called into question in probes by CBS Chicago, Chicago magazine and Truthout.

“All of us would welcome him back,” Tribue said, while noting that many of the incidents of accused misconduct occurred within the neighboring Grand Crossing District.

According to the Citizens Police Data Project, those incidents include at least seven allegations, with an additional five originating in the neighboring Gresham District.

The decision about whether Evans returns now rests partly in the hands of his old boss.

This report was published in collaboration with City Bureau, a Chicago-based journalism lab. Additional reporting by Darryl Holliday.