Argument Over Jeff Park's Future Boils Over During Debate About Apartments

JEFFERSON PARK — The roiling debate over whether Jefferson Park should remain a suburban-like haven or allow denser developments near transit hubs and business districts came to a head Monday evening as residents debated plans to build a 48-unit apartment complex.

While opponents of the proposal to transform a long vacant former concrete company storage facility across the street from the Jefferson Park Transit Center into two 3½-story apartment buildings said it would destroy the fabric of their single-family neighborhoods, supporters said it would give the struggling Jefferson Park Business District a boost.

"People are going to leave Jefferson Park because that's not what we want," said Ann Yost, who said she has lived her entire life several blocks from the property at Argyle Street and Long Avenue.

But others said the two-bedroom apartments, most of which would rent for between $1,600 and $1,900 per month, would be attractive to those who were not interested in buying a home or owning a car.

"This debate is all about fear," Luis Pedraza said. "People will want to live here. It will benefit the community."

Many of the opponents said they did not believe the residents of the complex would have only one car per apartment and would take up the already scarce spots on the streets in front of their houses.

The project includes 48 parking spots and two guest spots on the ground floor, more parking than it is required to provide because it is so close to the transit center and qualifies and transit-oriented development.

Dozens of people said the proposal would snarl traffic around Beaubien Elementary School and worsen overcrowding in the school's classrooms. 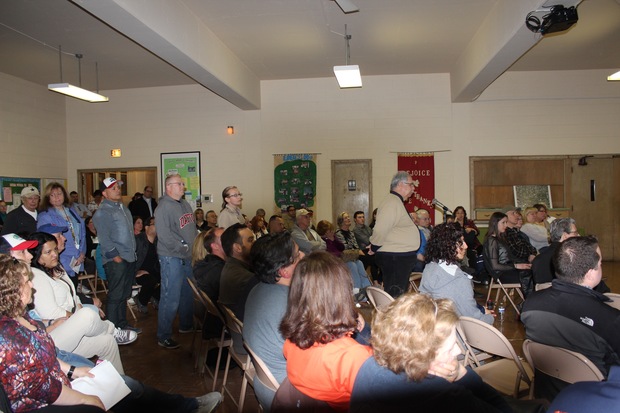 Jefferson Park Neighborhood Association President Bob Bank said only 18 apartments should be allowed to be built on the property, which is what current rules would allow.

But Ryan Ritcher, the co-founder of Jefferson Park Forward, said the development and its new residents could breathe new life into the Jefferson Park Business District, which is pockmarked with empty storefronts.

"This will give downtown a shot in the arm and help businesses along Milwaukee Avenue that have little or no parking," Ritcher said, also to loud applause, indicating that the standing-room only crowd of more than 100 people was split nearly in half.

The project was first proposed nearly two years ago and became a flashpoint in the 45th Ward aldermanic election.

After the election, the project was revised to be one-story shorter, although the number of apartments was not reduced.

If approved by the Plan Commission, five of the apartments would be set aside for low-income residents, as required by the city's affordable housing ordinance.

There are blocks of single-family homes north and northeast of the proposed development, with apartment complexes close by on Northwest Highway.

Before the 2008 housing crisis, seven single-family homes were set to be built on the land. 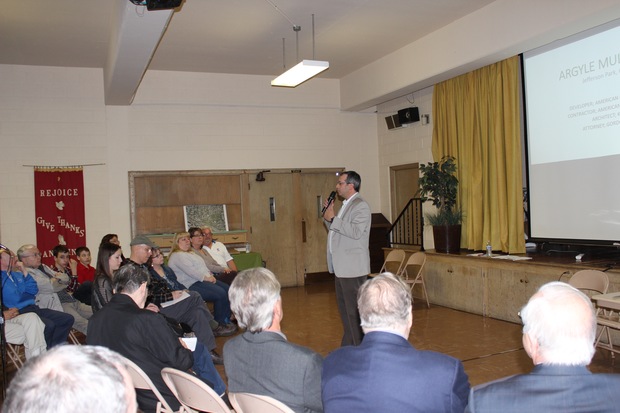 Arena said he would decide whether to support the project after considering the comments and suggestions made at the meeting.

Arena has often touted his support for projects that give people an opportunity to live near mass transit hubs and business districts, such as the one that surrounds the Jefferson Park Transit Center. It has been plagued with empty storefronts.

"We need to change some of the dynamic by allowing density near the transit center," Arena said.