BEVERLY — The field of participants for the Ridge Run is expected to be decidedly younger this year.

The shift in demographics for the 39th annual Memorial Day race is by design, said Margot Burke Holland, executive director of the Beverly Area Planning Association.

Holland reached out to several area schools months ahead of the race encouraging them to form student running clubs. The club's six-week training regimen ends with members completing the 5K race May 30 at Ridge Park.

"I thought this would be a good way to get buy-in," said Holland, who hopes to have 2,500 participants at the 2016 Ridge Run. Last year, 2,200 people finished the race that was marred by rainy weather and gusty winds. 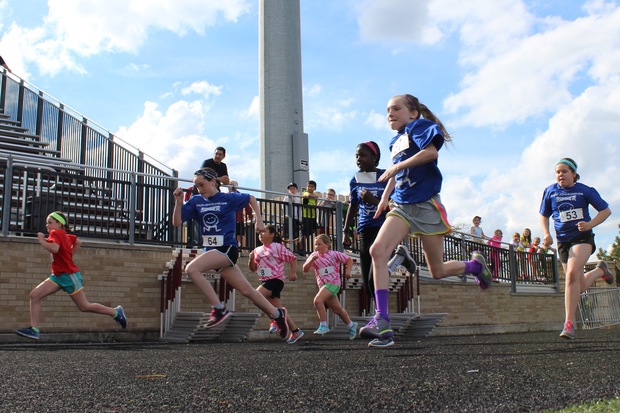 Runners from St. Cajetan, St. John Fisher and Most Holy Redeemer schools participated in a track-and-field event May 12 at Brother Rice High School in Mount Greenwood. Many members of these clubs will also participate in the 5k at the 2016 Ridge Run. [DNAinfo/Howard A. Ludwig]

The running club strategy seems to be working. Already, 989 people had signed up for the race by May 11, compared to 603 registrants on May 11, 2015. Holland believes about a third of the 5K participants will be 18 years old or younger as a result of the clubs.

Organizers recommend parents accompany elementary school runners. And clubs with 20 or more runners can request a pop-up tent from race organizers that will be placed at the festival after the race.

The festival will include inflatable jumping houses, face painters, hitting and pitching instruction from the Chicago Bulls/Sox Academy and more. Runners 21 and older will also be able to enjoy a congratulatory beer after the race, Holland said.

As for the running clubs, Holland said she teamed with Jennifer Harkins, the owner of Treadfit, to come up with the template. Harkins is a longtime runner and her Beverly-based gym offers high-intensity treadmill workouts that also incorporate strength training.

Harkins coordinated a running club about five years ago for students at St. John Fisher in West Beverly. She retrofitted the program this year so it could be used at schools throughout the 19th Ward.

"The kids want to run" the Ridge Run, Holland said. "They want the street cred." 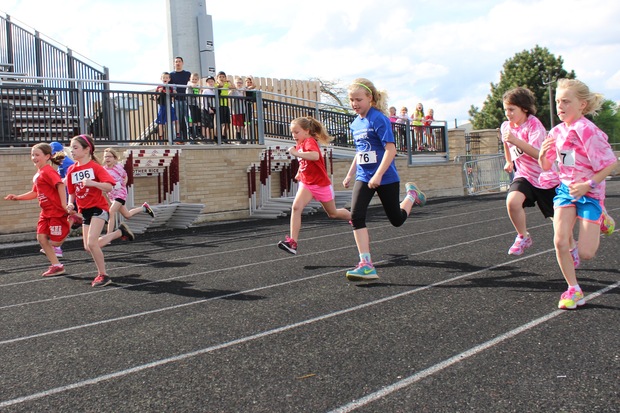 A track-and-field event May 12 was one of the highlights for running clubs at St. Cajetan, St. John Fisher and Most Holy Redeemer schools. Runners from the clubs are also expected to participate in the Ridge Run. [DNAinfo/Howard A. Ludwig]

Ann Marie McGuire of West Beverly re-launched the running club at St. John Fisher this year. She said about 45 students participate in the club, and she expects about half of them to complete the 5K at the Ridge Run.

"The kids are so enthusiastic," said McGuire, who has a fourth-grade son and sixth-grade daughter attending the school.

Runners from St. John Fisher joined others from running clubs at St. Cajetan School in Morgan Park and Most Holy Redeemer School in suburban Evergreen Park for a track meet on May 12. Participants ran four individual races and a relay as part of the track-and-field event held at Brother Rice High School in Mount Greenwood.

"It's so exciting. Everyone gets pumped up," said Christina Walsh, who coordinated the track event and works with the running club at St. Cajetan.

She said about 60 kids are part of her school's running club and about half of them are expected to complete the 5K at the Ridge Run. She said the club is great, particularly for students who aren't interested in baseball or other traditional spring sports.

"The point is to prepare for the 5K," she said.