LAKEVIEW — After weeks of silence, ousted Blaine Elementary Principal Troy LaRaviere is speaking out against Chicago Public Schools and his removal from the school.

LaRaviere held a news conference Thursday morning to criticize CPS and Mayor Rahm Emanuel, contrasting the mayor's tenure to his at Blaine.

LaRaviere said he was targeted for removal because of his consistent criticism of CPS. It came as he was seeking a position to lead the Chicago Principals and Administrators Association.

"When I was a lone voice, the administration tolerated me," he said in his speech, a copy of which was posted to his blog. "But when faced with the prospect of an organized group of education leaders speaking as one on behalf of students, they’ve moved with haste and reckless abandon to prevent that from happening."

CPS insists that's not the case.

The charges "demonstrate that he was subject to progressive discipline over time," said Emily Bittner, a CPS spokeswoman. "CPS removed Troy LaRaviere because of alleged acts of misconduct, including violations of a previous warning resolution passed by the board."

The August warning was followed by a written reprimand in December.

LaRaviere faces a dozen charges, ranging from misusing school equipment to engaging in political activity during work hours, and CPS is taking steps to fire him. The charges fall into three broad categories:

• Insubordination: CPS claims LaRaviere improperly supported parents in their efforts to block the Partnership for Assessment of Readiness for College and Careers, also known as PARCC testing at Blaine. For the second year, nearly 90 percent of Blaine students have opted out of the testing — the highest of any CPS elementary school.

The insubordination charges also condemn LaRaviere's public comments supporting the April 1 teachers strike and letters he wrote to Blaine parents that were critical of CPS.

"You hold a high-ranking managerial and supervisory position in which your public statements and actions are necessarily viewed as statements that reflect on the board and/or the CEO," CPS wrote in the charges. "As the principal of a Chicago Public School, you owe a duty of loyalty to the board, the CEO and their designees." 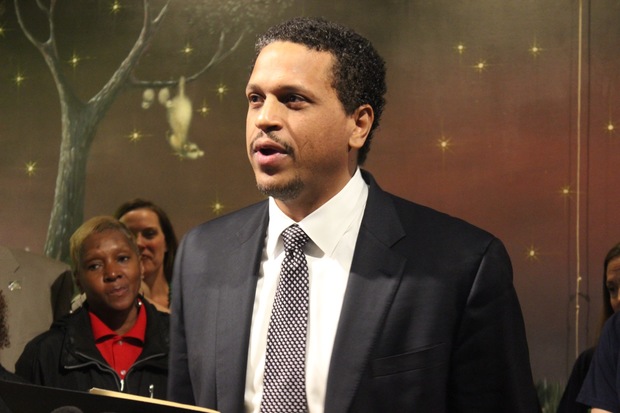 • Dereliction of duty: CPS said LaRaviere has not devoted sufficient attention to his "job duties and responsibilties."

From his start at Blaine, LaRaviere said he chose not to complete annual REACH teacher evaluations. The principal said the time-consuming evaluations distracted from the learning environment, and he was willing to accept a lower score on his own personal evaluation in exchange.

While LaRaviere denied Blaine's financial accounts had ever been assessed as "needing improvement," CPS said he failed to respond to a March 23 audit saying just that. CPS said the audit identified "serious financial issues," including a lack of adherence to cash receipt and purchasing policies and insufficient documentation of staff payroll activities.

Notably, the accusations fall after LaRaviere campaigned on behalf of Jesus "Chuy" Garcia in his run against Emanuel last year. This year, LaRaviere supported presidential candidate Bernie Sanders, appearing in a campaign video and accepting a role as an at-large delegate.

LaRaviere also is accused of using CPS computers and its network "excessively and inappropriately for personal use during work time" and spending too much time on personal activities during school days.

• Violation of district and state policies: LaRaviere said the violations related to routine audits of Blaine's financial accounts and accuse him of filing a late report. Other accusations include a teacher not completing a payee list for a student field trip and other "minor" violations, he said.

But LaRaviere, in turn, charged Emanuel and CPS of committing the same misdeeds he is accused of.

LaRaviere took a moment to thank his supporters and marveled at how far Chicago had come since his mother, a white woman, was banished from her family and her North Side neighborhood for having a black son — his older brother — 50 years ago.

"For my mother now to see this North Side community ... rally around her son, wielding signs that support him and chanting, 'Stand with Troy!' I would give everything I own to bring her back to see this," LaRaviere said.

LaRaviere stayed mostly quiet after his removal from Blaine in late April, declining to speak publicly on the situation on the advise of his attorney.

But he fired back at CPS last week, ending his silence with a scorching blog post accusing district leaders of interfering with his run for president of the Chicago Principals and Administrators Association.

LaRaviere also said CPS officials canceled a meeting related to the principals association the day of his removal. He said he suspects CPS of reading his school emails and incorrectly assuming his meeting at Stevenson with other school principals was to discuss the Sodexo building engineers contract.

The May 5 blog post was the latest in a series of heated exchanges from LaRaviere and CPS.

In the days after LaRaviere's ouster from Blaine, outraged parents and community supporters slammed CPS officials for the decision, as well as for flubbing the email notification sent to some parents and students in the middle of spring break.

LaRaviere was ousted April 20. He was pulled from Blaine and sent home, an alterative to reassignment within the network office, CPS said.

In the week after his ouster, LaRaviere garnered support from prominent politicians including presidential candidate Sanders. Sanders "condemned" the move and blamed it on Emanuel's revenge "obsession."

A huge crowd shouted down CPS officials during a hearing April 25, demanding to know why LaRaviere was removed with mere weeks remaining in the school year.

LaRaviere published the list of charges against him after Thursday's news conference: