WRIGLEYVILLE — The Cubs' claws are coming out.

Following a terse response from Ald. Tom Tunney (44th) cautioning against the Wrigley Field plaza's application for a patio liquor license, the team's owners fired back with an appeal to neighbors Monday.

The Ricketts family owns Hickory Street Capital, which will handle operations of the plaza and the hotel across the street.

In an email to Wrigleyville neighbors, Hickory Street heralded the plaza's "long-awaited opening," which it promise would turn "a once-abandoned area into a celebrated open space."

The Cubs' concessionaire filed for an outdoor patio liquor license on Thursday, skirting stalled negotiations with Tunney and community leaders over the Wrigley Field plaza ordinance.

While the liquor license has its limitations — the most significant being a lack of allowances for special events — the team's owners felt it necessary to begin preparations for the plaza's expected use in late 2016. 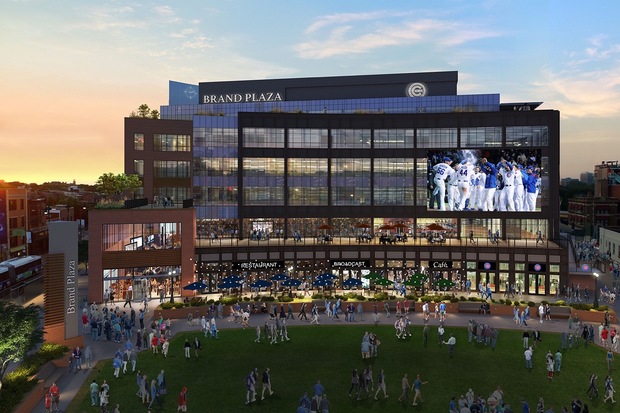 The Wrigley Field plaza and office building would have restaurants, bars and a screen for broadcasting games and movies. [Provided/Chicago Cubs]

The liquor license would allow the Cubs to sell alcohol, including mixed drinks, until 11 p.m. on weeknights and midnight on weekends. The ordinance would only allow beer and wine, and Tunney pushed for alcohol sales to end at 9 p.m. Sunday through Thursday and 10 p.m. Friday and Saturday.

The Cubs still want to work with Tunney on the ordinance, which would allow the team to schedule special events like movie nights, music festivals and farmers markets without requiring special use permits.

"Unfortunately, these new amenities are being challenged by those who seek to limit the promise of the plaza," the Hickory Street email read, blasting opponents who want to close the plaza during games and for one hour after games conclude. "This is not the intent of a welcoming space."

Tunney said Thursday that he was "very concerned with the potential of serving alcohol to thousands of people on the plaza every day of the year."

User @jim-gee said Wrigley Field already has an advantage over nearby bars and restaurants through legal exemptions for Major League Baseball.

"Most of what you do is receive special treatment," @jim-gee wrote. "When Murphy's or the Cubby Bear gets to close down the street to accept overflow during a busy night, THEN we'll talk. It's a neighborhood ballpark, and those neighborhood bars serve to make it a destination when the on-field product has downright sucked."

Others felt Tunney was unfairly favoring the Wrigleyville bars and said the Cubs should get the exact same treatment.

"This is the inevitable result of giving aldermen so much power in their wards," wrote @WildCat. "[It's] designed to force businesses large and small into a corrupt system that enriches the corrupt political class."

As you may have seen in the news this week, Levy Restaurants has filed an application for an outdoor patio liquor license related to the operation of the Plaza outside Wrigley Field. This exciting step will help lead the way to the long-awaited opening of the Plaza, turning a once-abandoned area into a celebrated open space.

The Plaza is operated by Hickory Street Capital, an entity owned by the Ricketts family. More than four years ago, the Ricketts family began the process to design and develop the Plaza as an exciting year-round destination suitable for its Lakeview location near the Friendly Confines. It was designed after extensive discussions with Alderman Tunney and the community and approved as part of a Planned Development in 2013.

The Plaza offers another choice among the many options that help keep Lakeview vibrant. When allowed to operate fairly, it will be an asset to neighbors and the neighborhood. On gamedays, it is an inviting alternative for guests of all ages, including parents and families who want to be included in the atmosphere but not be in neighboring bars. On non-gamedays, it offers chef-driven restaurants, entertainment, farmers markets, an ice rink, movies and music in the park and other activities.

Unfortunately, these new amenities are being challenged by those who seek to limit the promise of the Plaza. For example, opponents now seek to force the Plaza to shut down following every Cubs game. This is not the intent of a welcoming open space.

Since 2013, Alderman Tunney has proposed, and then abandoned, two separate ordinances to authorize the Plaza’s operation. The latest discussions backtrack yet again and raise the specter of restrictions in excess of the prior two ordinances. At Alderman Tunney’s request, we took the unusual step of meeting with a group of Clark Street bar owners regarding the operations of the Plaza. As you can imagine, they would prefer we not compete with them on gamedays. But forcing us to play by different rules deters investments in our neighborhood and denies neighbors and fans the promise of a vibrant, growing economic boost to the City.

To dispel a rumor, the Plaza is not intended to be driven by alcohol service 365 days a year. Our desire is to make the Plaza safe and friendly, open and inviting. The hope was to adopt a comprehensive ordinance to authorize activity and reasonable beer and wine sales on the Plaza, while providing operating restrictions consistent with other Clark Street businesses and the community’s input. But with a Plaza ordinance going nowhere and the space ready to open later this year, the patio liquor license is the most applicable license. It offers the same playing field as other outdoor patios in the neighborhood, allowing the sale of alcohol, including mixed drinks, until 11 p.m. on weeknights and midnight on weekends.

To date, Hickory Street Capital has been approached to host national and international events appropriate for its space in the neighborhood, food and music festivals, chef-driven restaurants, movies and music in the park and other activities that will bring world-class events and increased commerce to Lakeview and Chicago at reasonable times and for worthwhile activities.

This was the goal when the Ricketts family made a decision to invest $750 million to restore Wrigley Field and develop the surrounding community. Moving forward with the exciting addition of this valuable community asset will keep our neighborhood thriving and vibrant.

We remain committed to open, healthy dialogue with Alderman Tunney who has said his “number one priority is ensuring the public safety and quality of life for neighbors and visitors to our community.” We agree. The Cubs, for example, provide off-duty police officers to the community during, and for three hours after, each Wrigley Field event. In conjunction with the Plaza, Hickory Street Capital has proposed a safety and security plan which includes additional security personnel, reasonable rules for alcohol sales and limits on hours of operation, all aiming to ensure what happens on the Plaza will stay on the Plaza. No other business in the community makes more of a contribution to the safety, security and well-being of Lakeview than those owned by the Ricketts family.

The time has come to move forward. Cubs fans and neighbors deserve access to this wonderful space, which has been promised since 2011.

We appreciate your continued support.

• Read Tunney's Plan for Wrigley Field Plaza, Such as When It Can Sell Booze

• See What the Cubs Are Building This Offseason For Wrigley Plaza, Clubhouse

• Area Around Wrigley Is 'Just Not That Great,' Cubs Chairman Tells The Score

• 'Follow the Same Rules We Do' With Plaza, Wrigleyville Bars Tell Cubs