It's been less than a year since its heralded opening, but a popular section of Northerly Island's new park is already closed for repairs after high winds and crashing waves eroded parts of the bike path and scattered debris.

Opened to the public in September, the $9.5 million project turned the former home of Meigs Field into a sprawling natural habitat with a milelong bike path, man-made lagoon, native plantings and tons of wildlife.

Eight months after it opened, the area between the lagoon and walking path has eroded, forcing the Chicago Park District to close the eastern-most section of the park while repairs and a solution to the problem are contemplated. (Residents can still check out the new walking path near the concert pavilion.)

The eastern-most section has been closed to the public "since the fall," just a few months after it opened, said Zvezdana Kubat, parks district spokeswoman, but the limited access may not have been as missed during Chicago's colder months.

Though it's called an island, the park sits on a peninsula that juts into Lake Michigan. Waves have been crashing over a rock wall at the park and eroding the soil near the lagoon and under the walking path.

"We're seeing damage due to wave activity," said Ray Deda, project manager with the Army Corps of Engineers, which oversaw the project. "It's certainly a safety concern."

The biggest problem is the eroding of rocks and dirt that support the walking path, Deda said. He said engineers are considering installing a heavy material under the path that will help keep the ground in place. 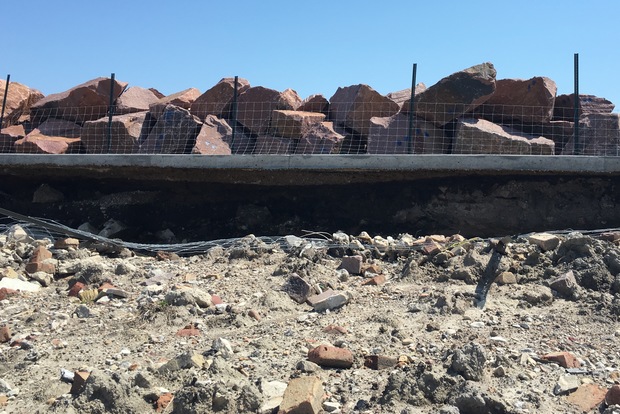 Soil and rocks that support the walking path at Northerly Island Park have eroded. [DNAinfo/Joe Ward]

Waves and wind also have caused rocks and other debris to cover the walking path, Deda said.

Damage to park property on the lakefront is not a new phenomenon. Lakeshore bike lanes sustained extensive damage caused by waves this spring.

Bob O'Neill, a parks advocate with the Grant Park Conservancy, questions why a solution wasn't in place at the time of the park's opening. The problem must have been know to project officials, he said.

An entire hill on Northerly Island was washed out during a storm in October 2014, O'Neill said.

"The frustrating thing is this was happening before they did all the work," O'Neill said. "There's no doubt they knew some bigger storms could do some damage."

Both O'Neill and Deda said a solution will have to be a balancing act between fighting erosion and keeping the area as native and picture-perfect as it is.

That's because Northerly Island isn't just a park; it's also something of a nature preserve.

"This was mainly an eco-restoration project and not a shoreline preservation project," Deda said. 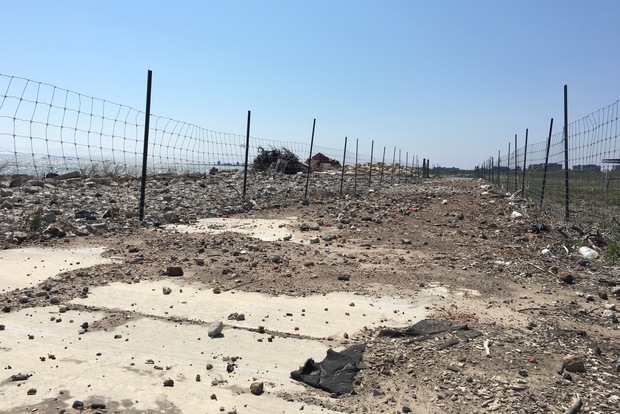 The Northerly Island Park walking path is covered in soil and rocks due to crashing waves. [DNAinfo/Joe Ward]

O'Neill said that building up the rock wall that acts as a barrier between waves and the park is not an ideal solution because it would block views of the lake.

"It's an interesting, delicate balance," he said.

It is not known how long the park will be closed, or how much repairs will cost.

Deda said the Army Corps is working on a series of fixes, though nothing has been finalized.

"Basically, we want to have a path for water to head to the lagoon" once it makes it over the rock wall, Deda said.

Despite the erosion issues, O'Neill said Northerly Island Park is still a gem of the Chicago parks system.

"It's unbelievable," he said. "It provides a great habitat for fish and birds. It's a phenomenal project."

The $9.5 million project was financed in part with $6.2 million in federal grants and was built by the Army Corps. The Park District covered the rest of the cost. 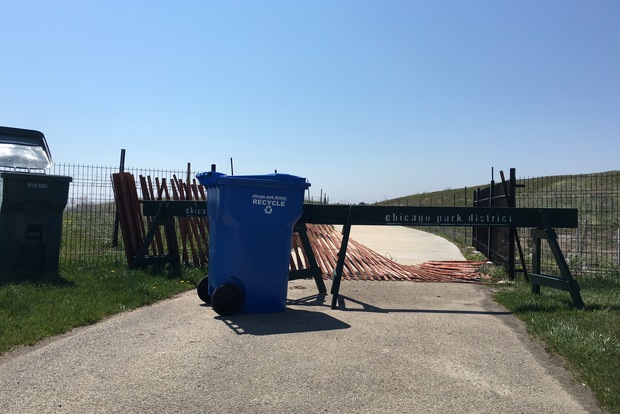 The entrance to Northerly Island Park is blocked off due to erosion issues. [DNAinfo/Joe Ward]