MORGAN PARK — A new bakery in Morgan Park will supply Whole Foods Market, Starbucks and others with an assortment of specialty cookies, brownies and sweets.

Laine's Bake Shop expects to open by May 30 at 11057 S. Homewood Ave. The Memorial Day weekend debut will showcase the made-from-scratch desserts of Jaryd and Rachel Bernier-Green.

The couple from the Oakland neighborhood trace the start of the bakery to April 15, 2013 — Tax Day.

Rachel had been working as an accountant and often used baking as a way to relieve stress, bringing in treats for co-workers as the filing deadline approached.

On that Tax Day three years ago, she and some co-workers went to a bar after work and whipped up a website and Facebook page for Laine’s Bake Shop.

The bakery now operates out of a shared location known as Kitchen Chicago on the Near West Side. The bakery supplies 11 Whole Foods stores in the Chicago market with four types of cookies, including Mexican wedding cookies, mocha raspberry thumbprint cookies, bourbon caramel thumbprint cookies and honey nut peanut butter cookies. 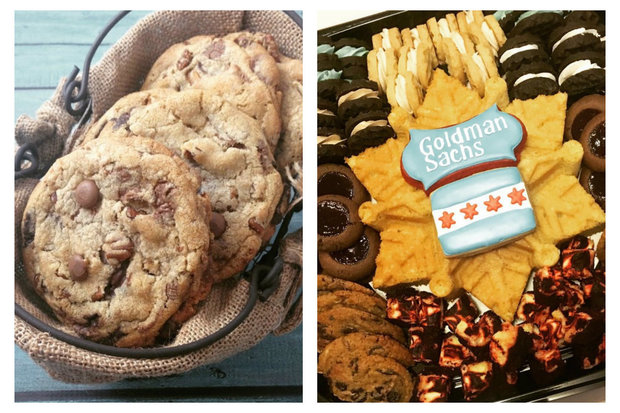 Chocolate chip pecan cookies (l.) are a specialty of Laine's Bake Shop. The bakery also supplies corporate party trays, such as this one to Goldman Sachs that includes an array of cookies and brownies. [DNAinfo/Howard Ludwig]

Just last week, the bake shop added Starbucks in Englewood to its list of clients. Laine's Bake Shop will sell its red velvet cheesecake brownies and a seasonal assortment of sandwich cookies in the coffee shop that opens in August.

Production of these items will shift to Morgan Park once the new bakery is up and running, Rachel said. Laine's Bake Shop in Morgan Park will also operate as a retail bakery, stocking its signature items along with bakery products such as fresh bread and peach cobbler, said Jaryd, 31.

The bakery hopes to continue its corporate catering work. It has provided cookies with company logos to Google, Goldman Sachs, Sears and others. These cookies are often part of a sweets table that features the couple's other baked goods.

Both Jaryd and Rachel said they believe the Morgan Park bakery will take off. They're hoping it will be one of a network of small bakeries throughout the city. The  couple envisions a larger bakery that could supply retailers nationwide. Ideally, the bake shop would open this facility in the Bronzeville or Englewood.

Rachel was raised on the South Side and in the south suburbs. She named the business for her grandfather, Laine, and her mother, Elaine. Both would tell her stories in her youth about Englewood and Bronzeville as the epicenter of black culture in Chicago.

"Part of our emphasis of stating the business was to bring those communities back to where they started," Rachel said.

Bronzeville and Englewood also played a role in the start of the bakery. It was at a "pop-up" shop organized by the Bronzeville Retail Initiative that the couple met with officials from the Greater Englewood Community Development Corp. in July 2014.

And it was the Englewood business group that put Laine's Bake Shop in contact with Whole Foods on Jan. 22, 2015.

"That is what launched everything that came after that," Rachel said of the Whole Foods deal.

She said the bakery landed in Morgan Park simply because of its rapid wholesale growth. A ready-made location was needed, and the storefront near the Morgan Park District police station had previously housed a bakery, she said.

To keep its social promise, the owners plan to hire employees from Englewood. Unlike typical hiring programs, the business will seek out workers who were previously homeless, convicted of felonies or suffered from substance abuse, Rachel said.

The idea is to give such workers, who often struggle to find jobs, a chance to settle into a career. The bakery owners are hoping to have even more opportunity to do just that as the company expands.

The all-natural bakery already is working to add Target, Wal-Mart, Mariano's and Walgreens to its list of wholesale customers, Jaryd said.

"We are not just a bake shop," he said. "We are business people."